The past, present and future of the JMU & Elon rivalry 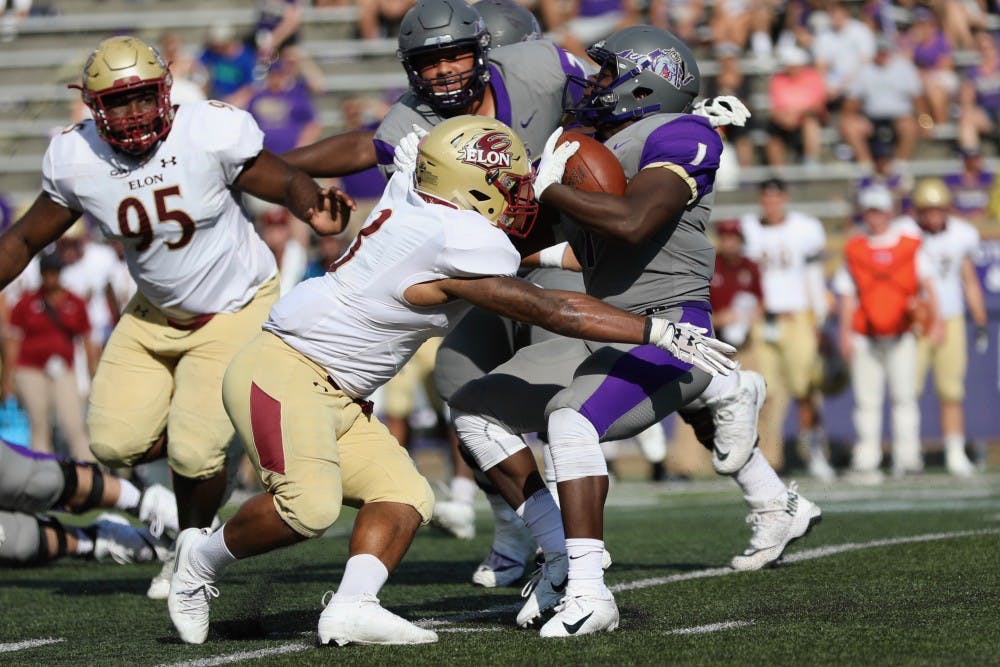 In 2014, Elon University left the Southern Conference to join the Colonial Athletic Association. The James Madison University Dukes joined the conference in 1985 and in recent years have been the dominant name in the CAA in nearly all sports. JMU joined the CAA during its inception in 1979 and since then have collected 88 conference championships across 18 D-1 sports. The Phoenix and Dukes have become unofficial rivals in the past five years due to close matches, back and forth series and connecting storylines.

The Elon University men’s soccer team has never lost to James Madison University. The Phoenix holds a winning record over the Dukes at 2-0-3. Yet, Elon is still considered an underdog when facing the Dukes. In 2018, the Phoenix traveled to Harrisonburg, Virginia in the regular season finale.

JMU was 6-1 in Colonial Athletic Association play and was at the top of the conference. The heated match-up saw 40 total fouls given to each of the rival teams. The Elon defense held down the JMU attack while senior Jack Willbye found the back of the net in the 38’ to lift the Phoenix over the No. 25 team in the country. The Dukes would go on to win the tournament and make a run all the way to the elite eight of the NCAA tournament.

“It’s a new season. There are coaching changes, player personnel changes, skids graduate and new players coming in. You have to gel your group and get the most out of it,” said head coach Marc Reeves, ahead of the JMU game.

Reeves was not wrong about it being a new season. The Dukes came to Rudd Field on Saturday and repaid the loss the Phoenix handed them last year. The Dukes stomped Elon 6-0. JMU improves their conference record to 2-0 while the Phoenix fall to 0-1 in the CAA.

The Elon University Phoenix pulled the upset of the year in 2018 when they toppled the Dukes in Harrisonburg 27-24. Prior to the game, Elon hadn’t won a game against the Duke’s six tries. The win felt like a changing of the guard as the Phoenix came up victorious against the reigning Colonial Athletic Association Champions. However, the narrative changed when the leader of the Phoenix, head coach Curt Cignetti, took up the head coaching role at JMU.

The 2019 matchup will flip the script of the last game. Not only are the coaches different, but Cignetti and the Dukes will now travel to Rhodes Stadium on Phoenix family day. Former defensive coordinator Tony Trisciani, now the head coach for the Phoenix, recognizes the importance of this game for fans but refuses to make the moment bigger than it is.

“I’m sure everyone will be excited for that game when it does come but we got a lot of work to do before we get there,” Trisciani said regarding the upcoming season.

The Phoenix will look to topple the CAA giants for the second year with all eyes on the former coach.

If there’s one team that is eager to defeat the James Madison University Dukes, it’s the Phoenix’s volleyball team. Elon Volleyball is 0-10 against JMU, nine of the losses came within conference play. Despite the negative history, the veterans on the Phoenix squad know they have a chance to rewrite history this season.

The past three matches between the Dukes and Phoenix have been settled in five sets. In their last meeting in the first round of the Colonial Athletic Association tournament, the Phoenix took the Dukes to the brink. The Phoenix battled back from a 2-1 deficit to force the No. 3 team in the conference to a fourth set on their own court. Senior blocker Nori Thomas said there are a number of the teams in the conference that the team is “itching to beat” one of them being the Dukes. Thomas said beating a team like JMU requires determination and teamwork.

“The biggest thing we’ve tried to build in our four years here is all in and 100% that wants to be here and work together,” Thomas said.

Women’s soccer is another team that has yet to score a win against the Dukes. The Phoenix are 0-5 against James Madison University since joining the Colonial Athletic Association. Unlike the volleyball team, women’s soccer that’s Oct. 20 matchup against the Dukes is less about rivalry and more about redemption. In 2018, the Dukes handed the Phoenix their worst loss of the season 3-0.

This year, the Phoenix returns three of their top five points scored from last year who still have the taste of that loss in their mouth. The matchup will just as tough on the Phoenix as it was last year. The Dukes, who made it to the conference finals in 2018, return their top five scorers and their starting goalie in 2019. The one difference in this year’s matchup is that it will be the Dukes that have to travel to Elon to face the Phoenix on Rudd Field.

The James Madison University Dukes are the dominant face in Colonial Athletic Association women’s lacrosse. In the past decade, the Dukes have won the CAA six times, been to the finals three additional times and have never been ranked lower than No. 2 in the conference. The Elon University Phoenix has yet to beat the Dukes in seven tries.

The Phoenix team returning to Rudd Field in 2020 might be the team to give the program its first win. The team will see the return of the dynamic attack duo of Sophomore Mae McGlynn and 2019 CAA Rookie of the Year, Freshman Kaley Thompson. The two attackers combined for 85 points for the Phoenix last year. They also retained standout goalkeeper, Sophomore Paulina DiFatta, who transferred last year from Fairfield University.

One could only think that with another year of offseason training and growth, the young lacrosse stars will be ready to take on the powerhouse Dukes.