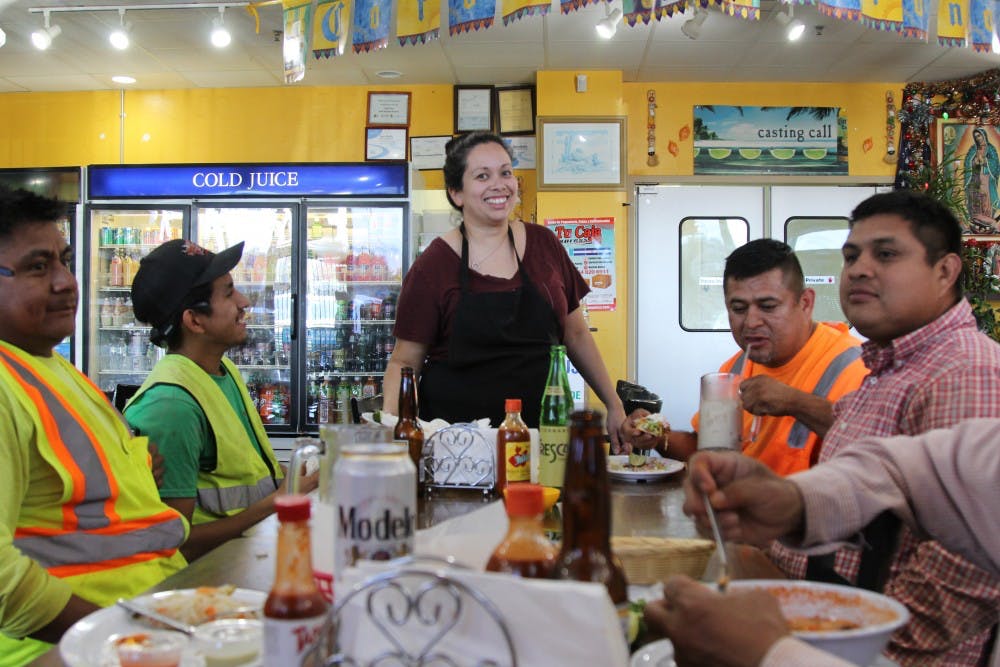 BURLINGTON — All it takes is a 10-minute drive into Burlington for senior Paloma Figueroa to get a taste of home. Taqueria Aztlan is where she goes to eat tacos and visit the store owner who welcomes her each time.

Esperanza Villalobos and her mother have been running the restaurant since October 2006. About four to five years ago was when she first noticed students from Elon University were visiting her restaurant, which also doubles as a store.

“We noticed some Young Life coordinators or mentors would come and visit our store, which I believe were from Elon,” Villalobos said.

It was around the same time when Figueroa became a regular customer. It was her first year at Elon, and she wanted to find a place that had the food she grew up with.

“I remember a friend of mine named Sammy was actually the one who introduced me to Taqueria Aztlan,” Figueroa said. “He was Mexican, like me, and he was searching all the different Mexican restaurants in the area because he wanted something authentic.”

The authenticity of the food is part of what Villalobos believes keeps her customers coming back for more. She said she knows she has competition with food trucks and other Mexican restaurants in Burlington, but she has loyal customers who know her food is made-to-order.

"We make everything on the spot. It is all fresh and made right after you order."

“We make everything on the spot. It is all fresh and made right after you order,” Villalobos said.

The menu is also vast and allows customers to have plenty to choose from. The variety and availability makes Taqueria Aztlan a great spot for vegan and vegetarian students as well.

“I heard about Aztlan through Paloma actually,” sophomore Shreeja Shah said. “I have since taken a bunch of my friends there as well. I’m vegetarian, and they are really accommodating, so if I see something I like, I can ask for it without meat.”

Shah introduced her friends from the International Living Learning Community to the restaurant and plans to continue to recommend the family-owned establishment to all the new residents on her floor.

Villalobos said the burritos and tacos are her most popular menu items. She said she appreciates her regular Elon customers and considers 50 to 60 of them regulars.

“It’s a chance to get out of Elon and enjoy some food I grew up with,” Figueroa said. “I also feel like I have established a relationship with the family here. The food is reasonably priced. I mean, tacos are only a dollar, and the atmosphere makes it feel like home.”

Figueroa was away for the spring semester for her Study USA program in New York. Several months had passed since she set foot into the restaurant, but Villalobos recognized her when she finally returned.

“I went again with my boyfriend not too long ago, and she immediately recognized me and asked me why I had not come to see her in so long,” Figueroa said. “It was incredible. She still remembered my order too.”

Villalobos said that while she may not know any of the students by name, she still recognizes them and remembers aspects of them such as their order, who they were dating, or even what school subjects they are good at. Villalobos is especially interested in their school subjects, since she has a son in middle school and is always seeking out tutors to make sure that he gets the help he needs.

“He has gone through a few tutors,” Villalobos said. “His first few tutors were people that charged up to 30 [per] the hour, and that got expensive really fast. I asked the Elon students how much they would charge me to tutor him and many said 15 to 20 [per] the hour would be good. It’s better for me because it’s cheaper and he enjoys getting to know the Elon students more because they are younger.”

Villalobos is content with the amount of people that come to eat her food. She doesn’t mind not having more Elon customers because it gives her a chance to know the regulars better.

“It gets hard and stressful running a restaurant,” Villalobos said. “I have another part-time job, but I do not actively seek out customers. It’s all based on recommendations, which is good for me because it means people like the food, and that is enough for me.”