Icelandic native steps up early in her career 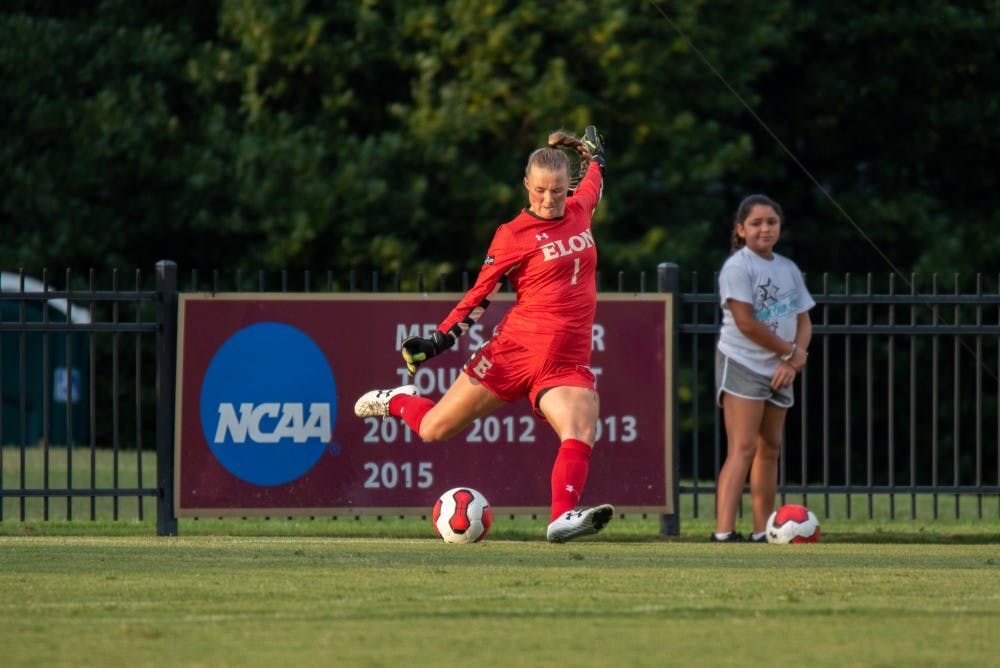 Photo by Zach Ohmann | Elon News Network
Katrin Hauksdottir kicks the ball, as the starting goalie for the women’s soccer team, during a game against Liberty University on Sept. 12.

Elon University’s women’s soccer team has seen its fair share of ups and downs over the years, with new coaches, strategies and players trying to improve the struggling program. This season, one of the changes can be found in who stands between the posts during games— freshman Katrin Hauksdottir, originally from Iceland.

“We were made aware of Katrin in the spring,” Head Coach Neil Payne said. “We went to see her play and were very impressed, and we wanted to sign her straight away.”

Hauksdottir said it was coaches like Payne that convinced her to eventually come to Elon. Beyond the coaches that came to see her play, Hauksdottir said she would frequently FaceTime with the coaching staff so they could build a strong relationship by the time she decided where to go.

“It was a good feeling to have someone I’ve talked to enough to go do it,” Hauksdottir said.

Payne said though Hauksdottir is a freshman, she has what it takes to be a leader on the field.

"Everybody in front of her trusts her, and that kind of trust is contagious through the other lines in the team."

“Everybody in front of her trusts her, and that kind of trust is contagious through the other lines in the team,” Payne said.

In her time as a Phoenix, Hauksdottir has started and played in every match and has only allowed six goals in seven games this season. At this time last year, the Phoenix had given up 10.

“She’s made a massive improvement to the program,” Payne said. “She understands the game well, how it’s not just about blocking shots but it’s about your positioning relative to where the ball is. It’s about having good feet. She’s just checking tons of boxes.”

“[Haukar] was the team I grew up in, but I changed teams [because] the coaches wanted a more experienced goalie. I played a little ... but I wasn’t getting the experience on the bench,” Hauksdottir said. “So, I changed teams and found a team I was really good on called Keflavík and that was the last team I played for.”

The transfer to Keflavík was made in March, and Hauksdottir took advantage of the time she had left on an Icelandic team. Earlier this year, Keflavík was the runner up in its domestic cup. Hauksdottir’s efforts helped put the team in the women’s division of the Pepsi League, the top-tier women’s football league in Iceland.

However, all that experience didn’t prepare Hauksdottir for the changes she would have to make playing in America.

“I wasn’t ready for the heat. It was tough in the beginning,” Hauksdottir said. “But I also had to adjust to the tempo, it’s much higher here.”

Though it is still early in the season, Hauksdottir is shaping up to be exactly what the Phoenix needs in their time of rebuilding.

“She’s got a presence. It’s always important in that position to have a presence,” Payne said. “She commands the box and she’s been massive for us this year.”