Edwards was killed in an August murder-suicide at his home in Cobb County, Georgia 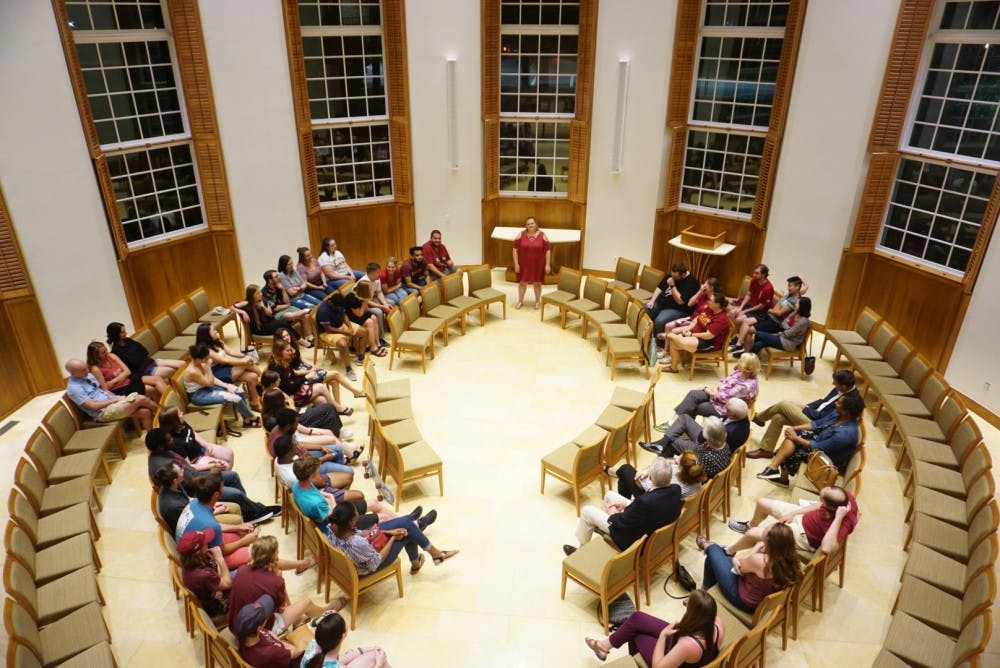 Over two weeks after the sudden death of Elon alum Chris Edwards,’ students, faculty and alumni gathered in Numen Lumen Saturday evening to remember “the mayor of Elon,” as he was known to his friends.

Last month, Chris and his younger sister, Erin were shot and killed at the family’s Cobb County, Ga. townhome by their mother Marsha before she killed herself in an apparent murder-suicide, according to police.

"When I think of people who didn't deserve this, he is at the top of the list."

“When I think of people who didn’t deserve this, he is at the top of the list,” Melissa (Martlock) Berry ’15 said who knew Edwards from marching band.

Barry co-organized the event with Lindsay Luhn ’16 to have a gathering for the Elon community who couldn’t make it to his Atlanta funeral.

“I thought it was really important for the Elon family to be able to gather and to have some time to remember Chris in a group, in a space familiar with us, close with us, maybe a little more accessible,” Luhn said who came from Maryland to attend.

The gathering of about 50 brought together people from all aspects of Edward’s five years on-campus including his work with the school of communications, the marching band and safe rides to name a few.

Sharing stories of Edwards’ extraverted and welcoming personality led to an equal amount of laughter as tears, with people continuing to process his death.

One person still in shock is Jon Dooley, vice president of student life at Elon.

“I still can’t wrap my head around it,” Dooley said holding back tears. "And I’m beginning to realize the answers are probably not going to be there and that is especially hard."

Edwards and Dooley had bonded after realizing they both played brass instruments for their respective school’s marching bands in college.

“Band kids have to stick together in life,” Dooley said

For others, it wasn’t about the unanswered questions, but instead it was about what was left unsaid.

Kaz Liu met Edwards their freshman year at Elon and instantly hit it off.

“Chris took me under his wing and we immediately became close,” Liu said.

But their relationship reached a whole new level when Edwards learned Liu was struggling with her sexuality and adjustment to Elon. Liu said they had her suicide note written, but it was a 3 a.m. conversation with Edwards that reversed their decision.

"I didn't get to thank him. He is the reason I survived my freshman year."

“I didn’t get to thank him,” Liu said. “He is the reason I survived my freshman year.”

With the encouragement from Edwards, Liu eventually transferred out of Elon during her sophomore year. They lost contact, but Liu last heard from him in January when they announced they were going to grad school at the at the University of North Carolina – Chapel Hill.

“I’m so glad to see that you are thriving and doing you,” Liu recalls Edwards saying.

“I never thanked him for that specific night,” Liu said. “That’s the biggest thing that I regret is not telling him.”

Liu wasn’t alone in sharing their stories of Edwards as a listener, helper and ultimate friend. Instead it was a common theme throughout everyone’s anecdotes about a man who valued friendships.

For Berry it was needed in order to move forward.

“This was very healing for me personally and I think a lot of other people are feeling that way too,” Berry said. “I didn’t know how to process this I didn’t know how to mourn this loss, but being here with all of these people who were also loved by Chris and also loved him and hearing all the exciting serious and monumental stories about him has been really healing for me.”