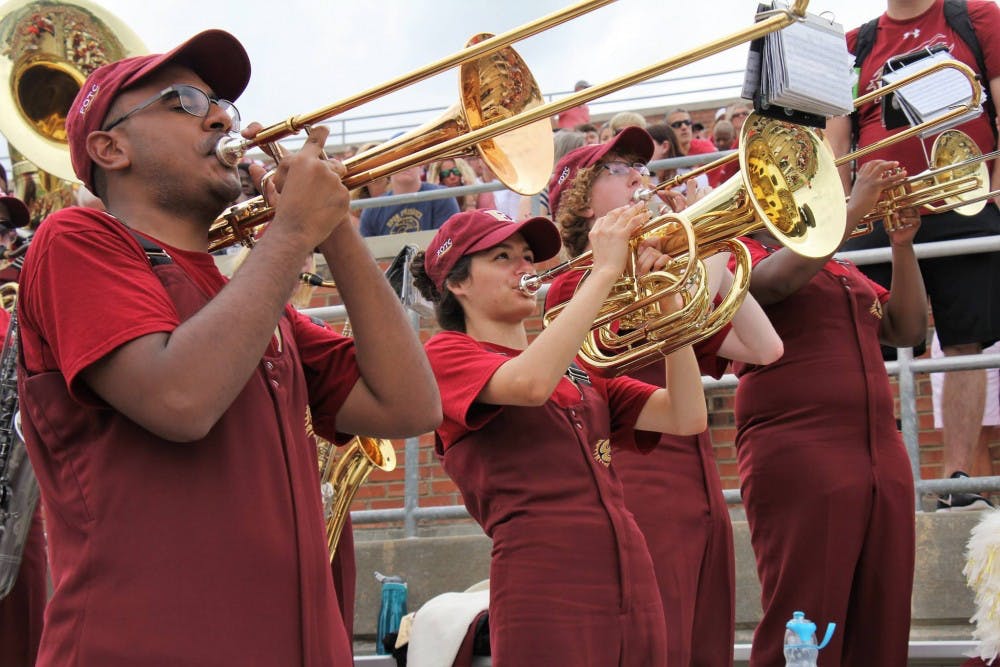 Leaping off the bed with his hand outstretched, Chris Edwards ’18 was the first person to welcome Tyson Glover ’17 to Smith Residence Hall in 2014.

Glover assumed Edwards was his roommate and as a snare drummer himself, knew they would get along. It turned out that Edwards had just been “relaxing” in his the room, waiting for Glover’s actual roommate. The memory still cracks Glover up.

“On a dreary cold day in January, he gave me the one moment of warmth, of welcomeness, of what Elon was supposed to be,” Glover said. “Chris was the foundation of my closest friends at Elon.”

After spending his freshman fall abroad, Glover was eager to stay in touch with Edwards. The two traded numbers. Edwards typed his contact name in as Trombone Chris — which it still is today.

“The legacy that he leaves behind is something we’ve started to see, but something we’ll continue to see,” Glover said.

Police said Edwards and his sister, Erin, were shot and killed by their mother, Marsha, in an apparent murder-suicide in Cobb County, Georgia, on Aug. 21. The Cobb County Police Department has not yet released the official police report on the incident. Glover, now an assistant director of admissions at Elon, joined hundreds of mourners at a funeral service for the family held on Aug. 28 in Atlanta.

According to University Chaplain Jan Fuller, a "gathering of friends" in honor of Edwards is being organized by alumni and friends on Saturday, Sept. 7 at 7 p.m. in the Sacred Space of the Numen Lumen Pavilion.

“There's a million different stories about the man Chris was,” Glover said. “Seeing that he was being celebrated was one way of just seeing hope through all of this. … This man really was just a light in this world.”

Glover remembers how long it would take to walk to the School of Communications with Edwards.

“Everybody knew this guy and he was just somehow ... best friends with every single human who came in contact with him,” Glover said. “It was just something else to see how warm, friendly and welcoming this man was to everybody. … He didn’t know any strangers in his life.”

It was a characteristic that led to Edwards being nicknamed “The Mayor of Elon” by Glover and other close friends.

As classmates, bandmates and neighbors, Glover and Edwards got along in almost every aspect — except for one: The Washington Nationals vs. The Atlanta Braves. The two teams have played each other 64 times in the last three years, each winning and losing 32 games.

“He always had my number, he still does to this day — getting on my case about that sports rivalry,” Glover said. “He and I could go on for hours about what was going on in the world of sports.”

Edwards’ enthusiasm for sports and broadcasting was renowned in the School of Communications, where he majored in media arts & entertainment, the forerunner of cinema & television arts. In student media, Edwards co-hosted “The Urban Power Hour” on WSOE 89.3, a radio show dedicated to “playing and defining exceptional black music.” He also worked as a show host for “One on One Sports,” a student-run sports debate show.

“Chris was the person who got me introduced to sports journalism” said senior Andrew Vendelis, who is currently a host for the show. “Through ‘One on One Sports,’ Chris’ mentoring and leadership allowed for me to explore different ways of approaching sports journalism that I still use in my toolkit to this day.”

After the news of his death, donations to “One on One Sports” made in Edwards’ name were sent to the Office of University Advancement.

“I would love to see some of that go towards talent development because [Chris] loved giving feedback and making sure everyone was on their A-game,” Vendelis said. “If we can find a way to use those funds to make sure ‘One on One’ carries on in the blueprint that Chris helped create, I know he’d be happy.”

Edwards’ passion for sports broadcasting led him to choosing a senior spring semester internship with ESPN’s SEC Network over graduating with Glover and other friends.

After graduating the following semester, Edwards began working as the digital content manager for the Atlanta mayor’s Office of Film & Entertainment — where his younger sister Erin, 20, joined him for a summer internship.

“Chris and Erin were beautiful, vibrant, and brilliant young adults,” wrote Atlanta Mayor Keisha Lance Bottoms in a press release. “They filled the lives of all who met them with joy, compassion and kindness.”

Personal success was only half the reason Edwards loved broadcasting.

On his website, Edwards wrote, “I strive to inspire future African-American broadcasters that you can reach your dreams, and make a difference if you put the work in and have a little faith along the way.”

In early August, for the third year in a row, Edwards joined Elon alumni, staff and students at the 2019 National Association of Black Journalists Convention & Career Fair.

“For the last two years, he attended the Elon students and alumni brunch at NABJ and was always gracious with his advice and help to others, even sharing his contacts with our students,” said Nagatha Tonkins, School of Communications director of internships, who was with Edwards at the convention. “We always enjoyed Chris’ humor, enthusiasm and passion for sports.”

Edwards debated about sports as much as he cheered for them.

Uniforms, instruments, hydration-levels and vibes were some of the first things Edwards would check before a performance by the Fire of the Carolinas, Elon’s marching band. As an avid trombonist, Edwards led the low brass section, usually just a few feet from Glover in the drum line.

“He was just the kind of person that brought the fire to the Fire of the Carolinas,” said junior Clara Mueller. “He was the loudest of all of us. … We want to do our best to honor him in any way we can.”

Mueller was a freshman when she first met Edwards. Following his graduation, Mueller took over as the leader of the low brass section.

“I had never learned how to instruct a music performance. I had never instructed marching before. These were all tasks that were new to me,” Mueller said. “What really helped me was thinking back, how did Chris do this?”

One of Mueller’s and Glover’s favorite traditions was when Edwards would hush the entire band and have them sit following the injury of an Elon athlete. As the player began walking off-field, Edwards’ boom would cut the stadium silence: “Like a Phoenix, we rise.”

Mueller received the news of Edwards’ death during band camp, a week before classes started.

She was surrounded by dozens of other band students. Without a word being said, every member knew the season would be dedicated to Edwards. At the football home opener Sept. 7, the band will wear red ribbons in honor of Edwards.

Along with the red ribbon, Mueller will be wearing a neon yellow wristband. Edwards had lent it to her the last time they were together — during a beach trip in July.

“I was supposed to give this back to him when we were leaving, but I forgot. When I got home, I found it in my bag. … So, I kept it with me, so I could give it back to him during Homecoming,” Mueller said. “But now it’s mine. I’m so happy that I have it.”

Mueller plans to wear the bracelet during every game the band plays at this season.