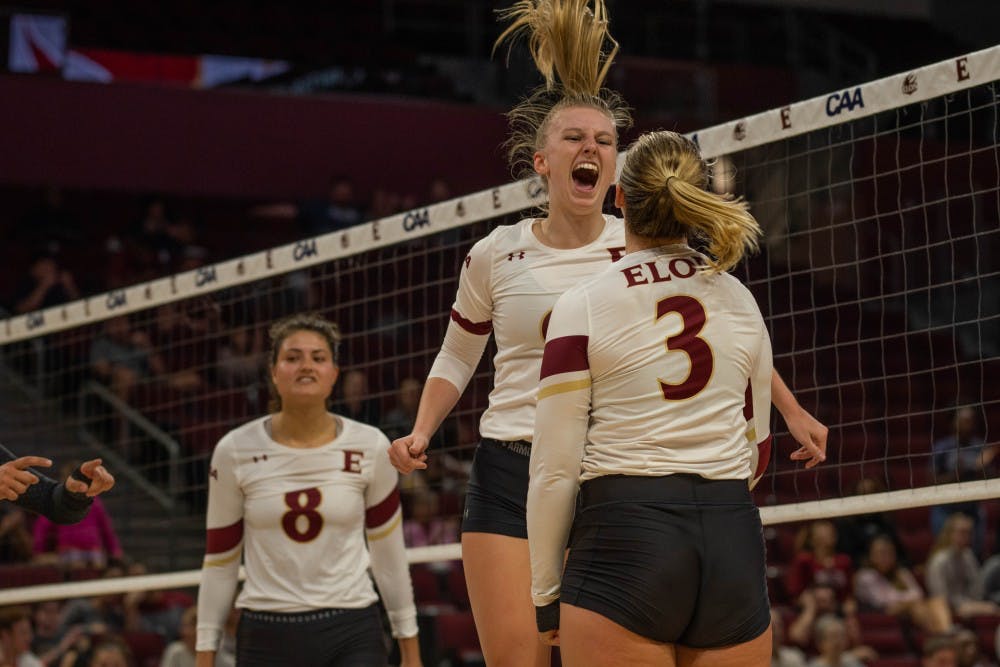 Photo by Thomas Denome | and Thomas Denome Elon News Network
Elon players celebrate during the team's 3-1 win over Hofstra, on September 27, 2019, at the Schar Center

The Phoenix attacked the 2018 CAA champs in the first set by playing the Pride close. Even when the Pride had the lead the Phoenix defense would not allow their lead to surpass three points. With the Phoenix holding a slim 17-16 lead, freshman middle blocker Jenn Krzeminski stepped up and shifted the momentum of the match completely. Krzeminski scored two kills and shut the door on the Pride with a block on three consecutive points. The Phoenix took the opening set 25-20.

The second set was a thriller. The Pride controlled the majority of the set with long runs and strong defense. Late in the set the Pride held a 19-22 lead over the Phoenix, three points away from victory. The set was saved by the Phoenix leading point scorer, sophomore outside hitter Leah Daniel, who ripped of four kills in five points to even the score at 23 apiece. The Phoenix would force extra points but the Pride would take the win 27-25.

The Phoenix would take set three 25-20 after dominating the second half of the set. Then with all the momentum, the Phoenix dominated the Pride in the fourth set winning 25-18, securing the 3-1 victory.

“We have learned so much about our team. From the first match we played to now, we’re a whole different team and we’re just going to get better and better,” head coach Mary Tendler said.

Elon volleyball continues its family weekend homestand Sunday when they take on Northeastern University at 12 p.m. in Schar Center.