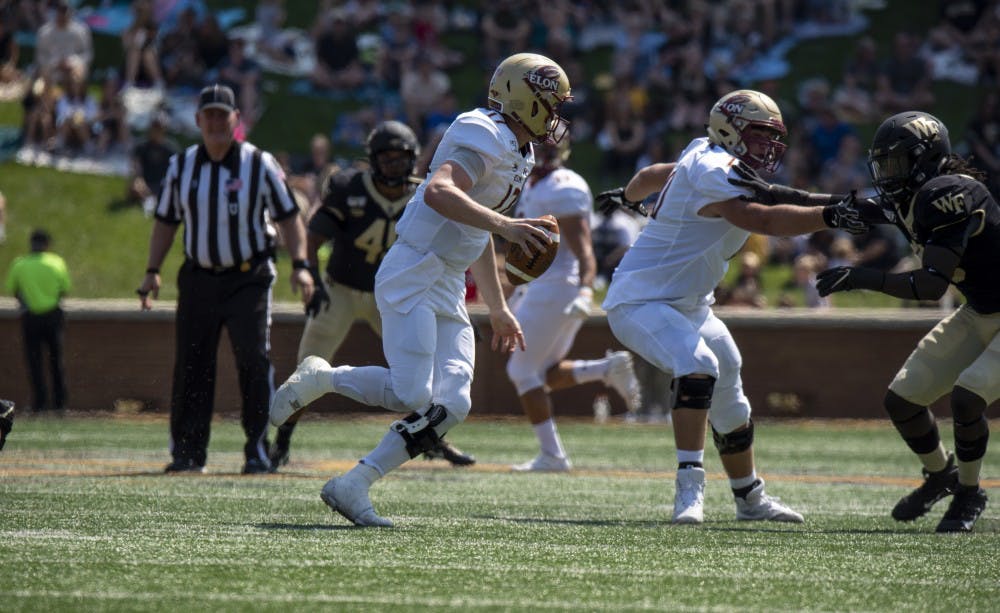 Elon football (2-2) lost 49-7 to Wake Forest University (4-0) Saturday. The Phoenix fall to 0-11-1 all-time against the Demon Deacons. With this loss, the team is now 0-12 against Football Bowl Subdivision (FBS) opponents since the team moved to the Football Championship Subdivision (FCS).

The Elon offense struggled throughout the first half. The Phoenix were forced to punt five times. Their lone score came late in the first quarter when junior quarterback Davis Cheek threw a 40-yard touchdown pass to sophomore Avery Jones.

The Wake Forest offense was red-hot to start the game. The team put up almost 400 yards of total offense. Redshirt junior quarterback threw four touchdown passes to put the Demon Deacons up 28-7 at halftime.

The Elon defense struggled in the first half, forcing only two punts and one turnover. The turnover came in the second quarter when senior defensive back Daniel Reid-Bennett hauled in his second interception of the season.

The Demon Deacon offense picked up where it left off in the first half. Newman threw his fifth touchdown pass of the day to make it 35-7 with just over nine minutes left in the third quarter.

As time expired in the fourth quarter, Wake Forest finished with over 600 yards of offense en route to a 49-7 victory. After the game, Trisciani had praise for Dave Clawson and the Demon Deacons’ football program.

“He's got a really good football team. They're very disciplined, they don't beat themselves,” Trisciani said.  “I wish him all the best and a lot of success here to the rest of the way in the ACC.”

Sophomore defensive back Cole Coleman said that he believes the team can bounce back next week against their conference rival: James Madison University.

“We can compete with anybody. It doesn't matter who you are. JMU is a big game,” Coleman said.  “We’ve seen them before we beat them before so I think we're ready to go see them.”

The Phoenix will be at home for their next matchup, as they take on the James Madison Dukes. Kickoff is set for 2 pm.