Elon athletes moving on to the pros 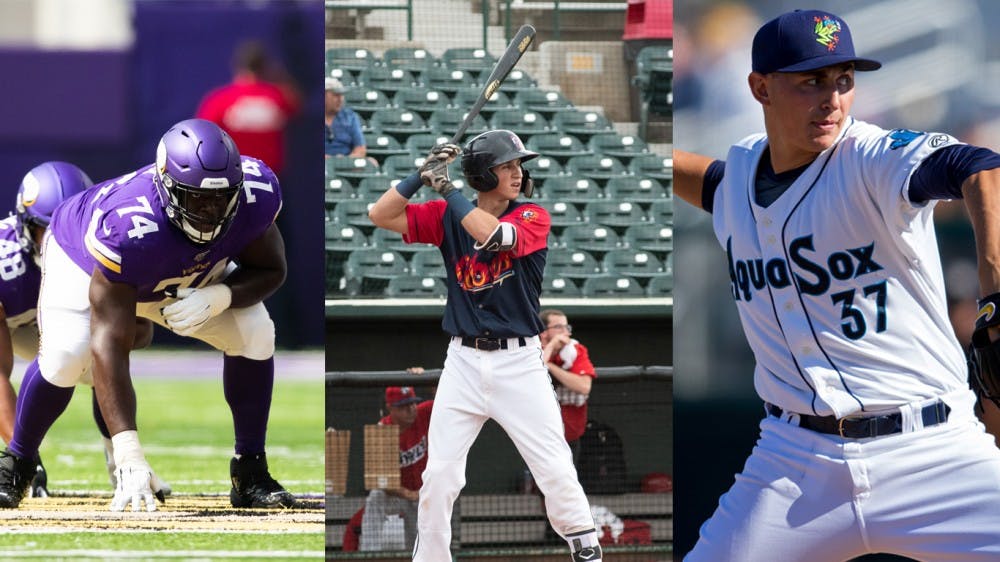 As students graduate from Elon University and move into the professional world, a select few enter the field of professional sports. This past year, five Elon athletes have been drafted between two sports: baseball and football.

Being drafted to a professional sports team can be a major milestone in the life of an athlete. For Udoh, hearing his name called was a memorable experience.

“It was an awesome feeling,” Udoh said. “Just finally knowing what team I was going to. Getting the opportunity to spend that day with my family was just a great part of it.”

Udoh has enjoyed being able to interact with other NFL players.

“It’s awesome. Just awesome getting to pick their brains and learn from the best professionals that we’ve got on the team,” Udoh said. “So every opportunity I get to talk to them, I absorb some of their veteran knowledge.”

In Udoh’s final two seasons with the Phoenix, the team went a combined 14-9. Udoh has experience winning from his time at Elon, and he said he is looking forward to a similar situation with Minnesota.

In a press release put out by Elon Athletics after Udoh was drafted, head coach Tony Trisciani said that Udoh is ready for the NFL.

“He’s a young man who came here to Elon, committed to the process and changed his body, developed as a football player and as a man,” Trisciani said. “He’s ready for this opportunity and this challenge, and I’m really excited for him, his family and Elon football.”

The Minnesota Vikings announced that Udoh will be one of the 53 players on the team’s roster going into week one. As the season is set to kick off, Sports Illustrated projects the Vikings to go 11-5 this season.

The Seattle Mariners made George Kirby their first-round pick in the 2019 draft. After celebrating the selection, it was time for Kirby to get back to work. Like other professional baseball players, Kirby is starting at one of the lower levels of professional baseball. He began his professional career with the Everett Aquasox, the Class A affiliate of the Mariners.

For Kirby, a large part of his game is his dominance. In his final season with Elon, he walked only six hitters in just over 88 innings pitched. In his first 23 professional innings, Kirby has not walked a single hitter.

In Kirby’s time at Elon, he was typically pitching once a week due to the structure of the college schedule. With the Aquasox, Kirby says that he had to get into the typical routine of a professional pitcher: playing every five days.

Kirby says that he has enjoyed his time with his new team so far.

“A lot of the coaches are awesome. There are a bunch of cool guys and it’s just been a good summer so far,” Kirby said.

In his time at Elon, Kirby said that the coaching staff prepared him not only a pro-career, but for life as well.

“Baseball goes a lot further than just being able to be good at it,” Kirby said. “You gotta be able to be coachable and be a good person.”

Elon baseball head coach Mike Kennedy has been with Elon for over 20 years. He said that it is important to develop his players and mentor them as well.

“We work really hard and we have an obligation to put the best product on the field we can for Elon University and win games,” Kennedy said. “But, man, it goes well beyond that and how you can shape lives, and make a difference in the kids’ lives.”

After redshirting in his first season with Elon baseball, Devanney started 147 games for the Phoenix over the course of three seasons. His collegiate career ended with a bang. The shortstop batted a sizzling .335 in his last year at Elon and drove in over 50 runs.

Devanney said that he played multiple positions during his college career. He also said that people like associate head baseball coach Robbie Huffstetler helped him become a more versatile player.

“He was there to help me make the necessary adjustments and make sure I was helping the team defensively, not only offensively,” Devanney said.

Devanney has kept up his offensive production at the professional level and earned his first promotion. He started with the Arizona League, where he hit .330 in 28 games. He is hitting a combined .280 across two levels with five homers.

After playing well in Arizona, he was called up to the Pioneer League, where he currently plays for the Rocky Mountain Vibes. Devanney said that getting called up was a “cool experience.”

The baseball season can be grueling day in and day out. Devanney said that he is trying to adjust to playing every day.

“You know, here I’ve played probably 50 or 60 games. The next year, I think it’s something like a 144-game schedule,” Devanney said. “So, there’s going to be a huge preparation process.”

Kennedy said that Devanney is in a “good place,” and he has advice for Devanney moving forward.

“He loves the game. He works hard and my advice is just make sure you still enjoy it, and he enjoys going to the ballpark,” Kennedy said. “As long as he does that, he’ll be fine.”

With a new year of Elon sports underway, athletes like Udoh, Kirby, and Devanney have moved to different regions of the country to pursue careers in professional sports. The trio developed and improved their skills at Elon, in order to compete at the highest levels. With their departure, a new crop of athletes will take their place, and maybe even follow in their footsteps.