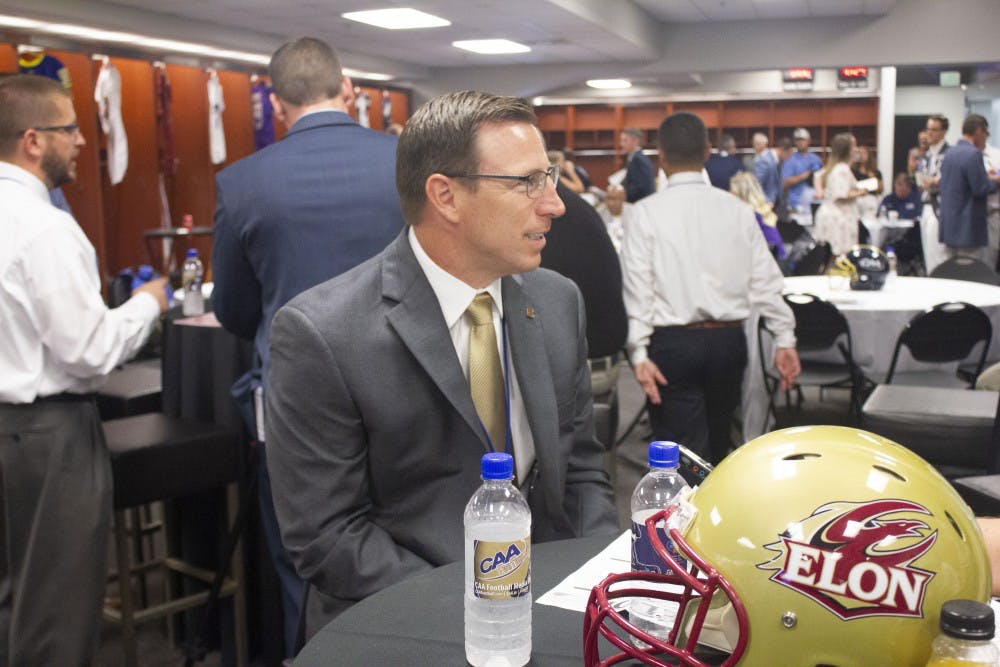 Tuesday was the first media day for all three Phoenix. Cheek said that he was nervous ahead of time due to the large scope of the event.

“This is an important day not only for Elon but for the entire CAA football community so you want to represent well. So you spend a lot of time just thinking about responses and what you are going to say going into things but nothing can really prepare you for it but it’s been awesome,” Cheek said.

Media Day kicked off with words from commissioner Joe D’Antonio giving a state of the conference address to the CAA’s 12 teams and the media in attendance. The commissioner spoke on the conference's continued commitment to excellence on and off the field and a hope for a CAA representative in the FCS Championship this year in Frisco, TX. D'Antonio also spoke at length about the conference's recent partnership with digital media company FloSports as its primary media partner for live sports events.

Next the commissioner introduced the keynote speaker, recently retired NFL player Tim Hightower, who before playing for over six years professionally was a standout at the University of Richmond. Hightower shared lessons he learned throughout his football career such as not letting something beat you twice, defining one’s legacy and playing for something greater than yourself.

Preseason All-Conference players were named including two Phoenix, sophomore running back Jaylan Thomas and senior tight end Matt Foster. Cheek and senior defensive back Greg Liggs Jr. were named honorable mentions for the All-CAA team. While preseason awards are nothing more than projections, Trisciani admitted that it was great to see his players rewarded for their efforts, especially Foster, one of the Phoenix unsung heroes on the offensive side.

“It’s great to see those guys be rewarded and recognized for their efforts. Matt Foster is 'Mr. Consistency' I mean he brings it every day on the field and in the classroom. He’s a very followable young man, a great leader and a talented football player,” Trisciani said.

Towson quarterback Tom Flacco and Richmond defensive lineman Maurice Jackson took the honor of CAA Offensive and Defensive Player of the year respectively. Along with preseason individual awards the projections for the 2019 football season were announced, projecting Elon to finish fourth overall behind James Madison, Towson and Maine.

The Phoenix look to exceed their ranking in 2019 starting  at North Carolina A&T August 31.