NC law would require rideshares to have an illuminated sign 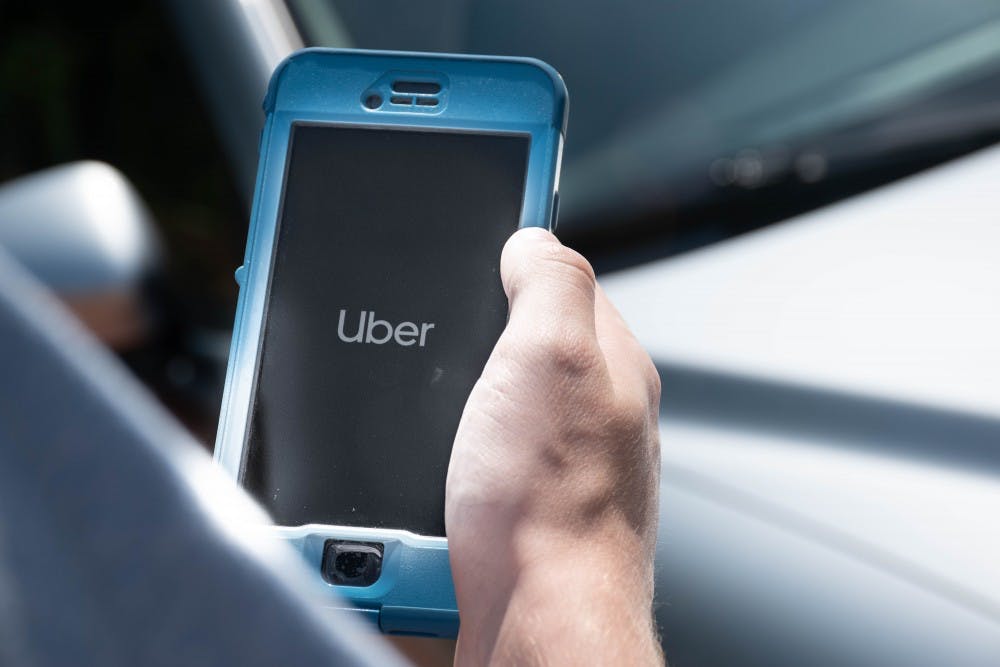 Photo by Grace Terry | Elon News Network
More than half of young adults reportedly used a ride-sharing service in 2018, according to the Pew Research Center.

The illuminated sign on a car showing an Uber or Lyft driver arriving is thought to make ride-sharing services safer, according to John Bell, house majority leader of the North Carolina General Assembly. He is sponsoring a law that would require ride-sharing cars to have a “consistent and distinctive illuminated sign.”

This bill was put before the General Assembly after a University of South Carolina student was kidnapped and murdered when she got into a car with a person she assumed was her Uber driver. Rep. Bell’s bill, the Passenger Protection Act, is modeled after a bill proposed in the South Carolina General Assembly in response to the death of the USC student.

Rep. Bell said the safety of ride-sharing services is a concern around college campuses and his bill would help address those concerns.

“Ride-share impersonators is certainly at the top for me. While the tragic murder of the University of South Carolina student Samantha Josephson brought the issue to the forefront,” Bell said. “It’s something that has been going on for years across the country, especially around college campuses.”

The lawmaker said if the Passenger Protection Act passes, a sign that lights up would be another safety measure for ride-sharing services.

“I believe illuminated signage is a reasonable and good first step to help riders properly identify their vehicles,” he said.

Lyft currently has a light that can be attached to a driver’s car — Amp — but drivers must meet eligibility standards to have Amp. These standards include having Gold or Platinum Accelerate Reward status, being in a city where Amp is available and having an updated shipping address.

Uber also has a light drivers can mount in their car — the Uber Beacon. This light is limited to drivers selected by the company in certain markets. Riders can select the color that the Beacon glows to aid passengers in identifying their ride.

Uber drivers have a sticker in their window if they are not invited to use the light. Before Uber sends drivers a decal for their window they can print one out. Anyone, including those that do not drive for Uber, can print this decal out.

"I believe illuminated signage is a reasonable and good first step to help riders properly identify their vehicles. "

The Passenger Protection Act would require all Ubers and Lyfts to have light-up signs like the Amp and Beacon.

Brooks Depro, assistant professor of economics, said there can be uncertainty around the safety procedures of ride-sharing services, which gives governments interest in intervening and regulating companies.

“Economists might argue that buyers of Uber and Lyft services may not have all the information they need to make informed travel decisions,” Depro wrote in an email. He said sometimes imperfect information can lead governments to intervene in markets.

While Uber and Lyft are options for students, Elon University offers alternative means of transportation. Safe Rides is Elon’s weekend transportation program that operates within a one-mile radius of campus. The program, which runs on Friday and Saturday nights, is staffed by student volunteers who drive other students to their destinations.

Lyft: A light can be attached to a driver's car — Amp — but drivers must meet eligibility standards to have Amp.
Uber: A light drivers can mount in their car — the Uber Beacon. This light is limited to drivers selected by the company in certain markets.
Elon: Safe Rides is Elon's weekend transportation program that operates within a one-mile radius of campus.

Senior and director of Safe Rides Bryanna Chazotte said the program is committed to the safety of students.

“Safe Rides is composed of your peers who have a vested interest in your well-being,” Chazotte said.

The program was founded in 1992 after Elon student Chad Macy was killed in a car accident by driving under the influence. Students are encouraged to utilize the program in situations where they feel unsafe.

“If you are worried about your safety or simply cannot afford to take $10 rides every weekend, Safe Rides is a good option,” Chazotte said.

Rep. Bell said if the Passenger Protection Act becomes law, it would be the responsibility of the Division of Motor Vehicles to enforce the law, making sure drivers are utilizing illuminated signs.

“There are several ways to get home safely and at the end of the day that’s all that is important, public safety is our number one concern as elected officials,” Bell said.

Both ride-sharing companies did not respond to Elon News Network’s request for comment.

Elon’s men’s basketball, which has a cumulative 3.1 GPA, graduated 100% of its players within the six-year timeline in 2019.