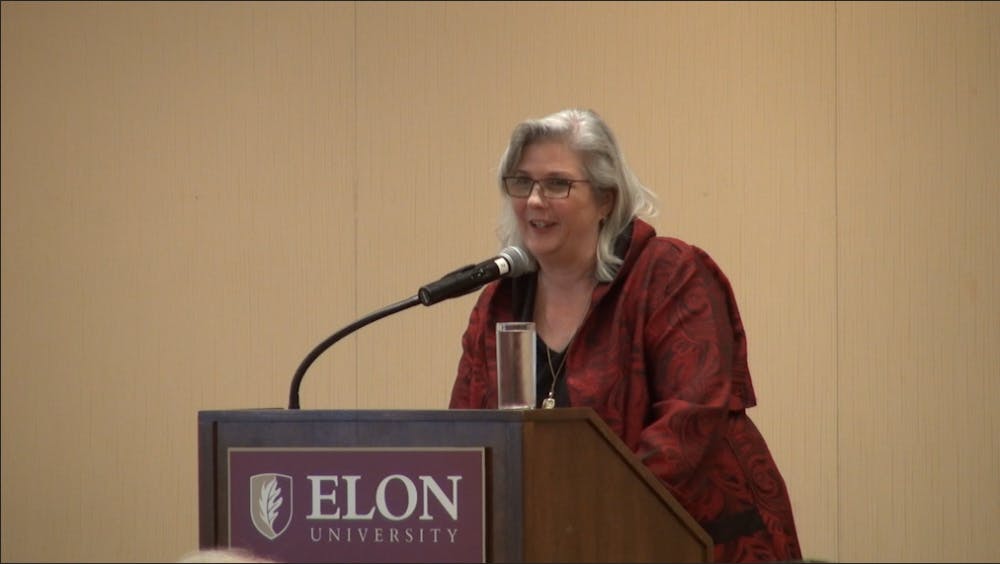 
Elizabeth Hudson is the Dean of the College of Arts, Media, and Design and Professor of Music at Northeastern University. She is also one of the four finalists to become the new Elon University provost. She spoke in McKinnon Hall on May 9.

Elizabeth Hudson was the first candidate of four to present in the ongoing provost search.

On Thursday afternoon, Hudson addressed a crowded McKinnon Hall filled with staff, faculty answering how she would leverage opportunities here at Elon to approach challenges that higher education faces in the 21st century.

Her presentation highlighted three fundamental conundrums she believes higher education faces today: the cost and accessibility of higher education, the way in which liberal arts education defines excellence and the issue of combating the global interconnected market of education.

“Higher education is more necessary than ever today for democracy and social advancement,” Hudson said, “and yet no one wants to pay for it. People think it should be very very cheap if not free, and that’s a wonderful thing but where is it going to get paid for?”

“We don’t want higher education reduced to a jobs training program,” said Hudson,  “because we all want education to be so much more than that.”

Currently Hudson is the Dean of the College of Arts, Media, and Design and Professor of Music at Northeastern University.

After her presentation, Hudson answered questions from members of the faculty, students, and staff present.

In the role as provost, she sees the role not only as academic but celebrating the success of academic achievements. When asked on specifics of how she plans to carry this role, she said she hopes to rely and incorporate the people.

“You can’t build a program based on an idea, you have to build it on the talent that’s here and the people that are here,” she said. “You have to get to know who the faculty are.”

At Northeastern, Hudson faced many issues similar to those she might encounter if selected as provost like that of a union. In the past 5 years, Northeastern administration voted against unionizing, an issue at Elon that is still being decided. While Hudson did not offer clear support or opposition to the union at Elon, she drew upon her experiences while working in New Zealand.

Hudson said she worked with professors working to unionize and was in support of the movement in New Zealand. She recognizes the cultural differences between the campuses and both situations offer benefits and drawbacks. Stressing the the importance of the issue being decided by a faculty vote, she urged faculty members to educate themselves on the pros and cons of a union.

Given her experience abroad, where she served as the inaugural director of the New Zealand School of Music from 2006 to 2013 she hopes to continue to support Elon’s commitment to global education. “I’ve heard about the deepening of experiences, and I want to know more about what that means to you all.”

This comes after current Elon provost Steven House announced in January that he would be stepping down from the position at the end of 2019. The provost is the chief academic officer of the university. Twenty members on the committee have narrowed the search down to the four candidates who will be presenting on campus throughout the rest of the month. Next week Dr. Aswani Volety will present addressing the same matters, followed by Dr. Deborah D. Ricker and Dr. Jason W. Osborne.

All candidates are asked to answer the prompt, “As Provost, how would you leverage the fundamental features of an Elon undergraduate, graduate and professional education that would position the institution to meet the challenges and opportunities of higher education in the 21st century?