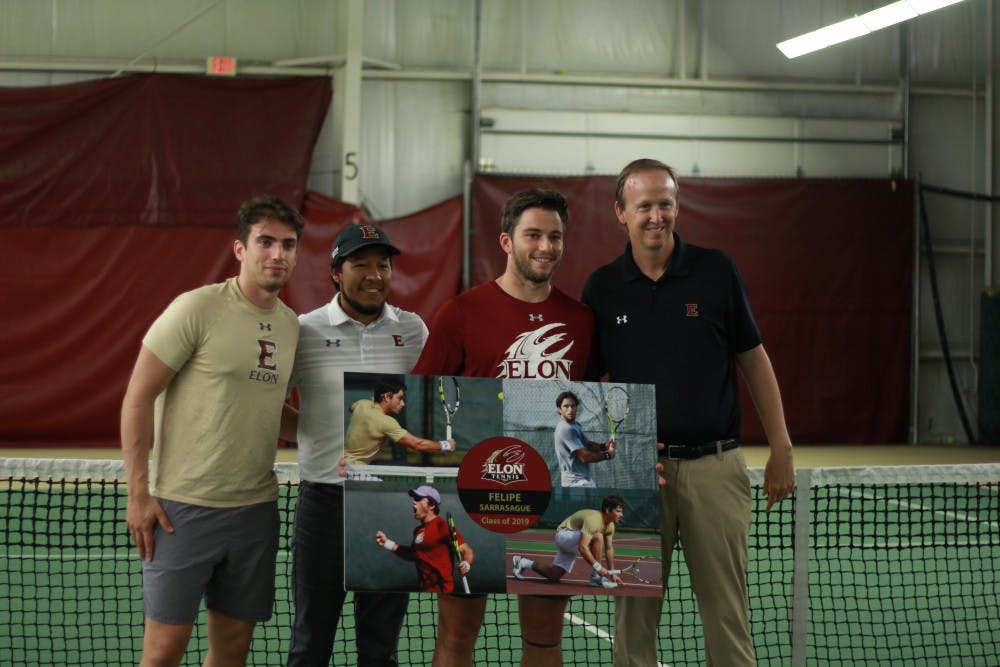 Elon Men’s Tennis (18-4) celebrated their seniors and a 4-1 win over the East Carolina Pirates  (14-6)  as they gear up for CAA tournament play.

While on paper this is just another match, for senior Felipe Osses-Konig and his three other classmates, it meant much more.

"I came in today with my best friends and family,” Osses-Konig said about his fellow players on Senior Day for the Men’s Tennis team.

“It’s exciting, we’ve been here for four years and these guys have grown a lot, this has been the best season they’ve had,” head coach Michael Leonard said. “To see them kind of come together, you know some of them have matured so much, it’s kind of exciting to see them have these moments.”

The Phoenix defeated the Pirates thanks to a critical clinch point from Osses-Konig.

“It's something I rarely do, clinching today was really huge,” says Osses-Konig. His win put the Phoenix win streak up to seven games, but also gives the Phoenix their best record since their 2013/14 season when they ended their season with a 19-6 record.

Seniors Felipe Sarrasague and Mario Paccini also clinched their doubles points to give the Phoenix an early lead in overall scoring. This year is the first time since their sophomore years that the two have played as a doubles team due to an injury of Paccini’s. Both players spoke very highly of their ability to create a relationship as strong as theirs is, even though they came into this adventure as strangers.

“When we came in we pretty much didn’t know each other, but we were tight from the very beginning and we’re very close, we’re like family,” says Paccini about the growth in the relationship they developed over the years.

Sarrasague says that “being teammates and being in the same surroundings all the time, of course that forces that relationship between us but we still hang out a lot outside of the tennis court, we’re still going to be friends for the rest of our lives.”

Elsewhere on the court, sophomore’s Kyle Frankel and Camilo Ponce won 6-2 in their doubles match, and Frankel would then beat out his single match opponent. Combined with the clinch from Sarrasague and Paccini, the Phoenix pushed ahead 3-0 over the Pirates overall.

But things started to get a little shaky for the Phoenix after.

Pirate star player Javier Renones, who’s yet to lose a singles match, took the win from Phoenix Paccini to make the overall score 3-1. Players and fans alike became curious as to what would happen next, as all of the other singles matches had gone into third sets with no end in sight.

The time for the seniors to become the heroes of Senior Day was upon them, but all four seniors seemed to be feeling pressure instead of excitement at this realization. Senior Taylor Foote kept fighting through his match, through the ups and the downs. This quality of play is something he wishes to tell the underclassmen as his time as a Phoenix draws to a close, to “Dig and fight, scrap your hardest, don’t complain and keep going,” as he did in his match.

As the recipient of the title CAA Player of the Year for their 2018 season, Sarrasague also had an off day in his singles game, something he took special notice of.

“I just get tight when I think about ‘oh what if I lose this match’, 'oh what will happen to my ranking’ you know, I get there and I start making a lot of misses, it's nothing the other player is really doing, it's just me beating myself,” Sarrasague said in a moment of honesty about his play that day.

This down in the dumps feeling was not unique to Sarrasague, something Coach Leonard says that even the hero of the day, Osses-Konig, was guilty of. “He’s had probably one of the best seasons, definitely one of the best seasons he’s had, and he was beating himself up the first two sets,” says Coach Leonard. “Your thoughts determine how you play, so if you’re thinking negative about yourself, it's impossible to play the sport because you’re playing an opponent, you can’t be playing yourself.”

Leonard has taken special notice of this mentality from his players and hopes that they got their emotional and mental difficulties out of the way. As the CAA Conference Tournament is fast approaching, Leonard is ready for the challenge, and hopes that his players take what they learned from their matches and ensure that the same thing doesn’t happen in the tournament.

As a player, Paccini is excited for his last go at the tournament, and hopes to create the most out of his final opportunity to become a champion.