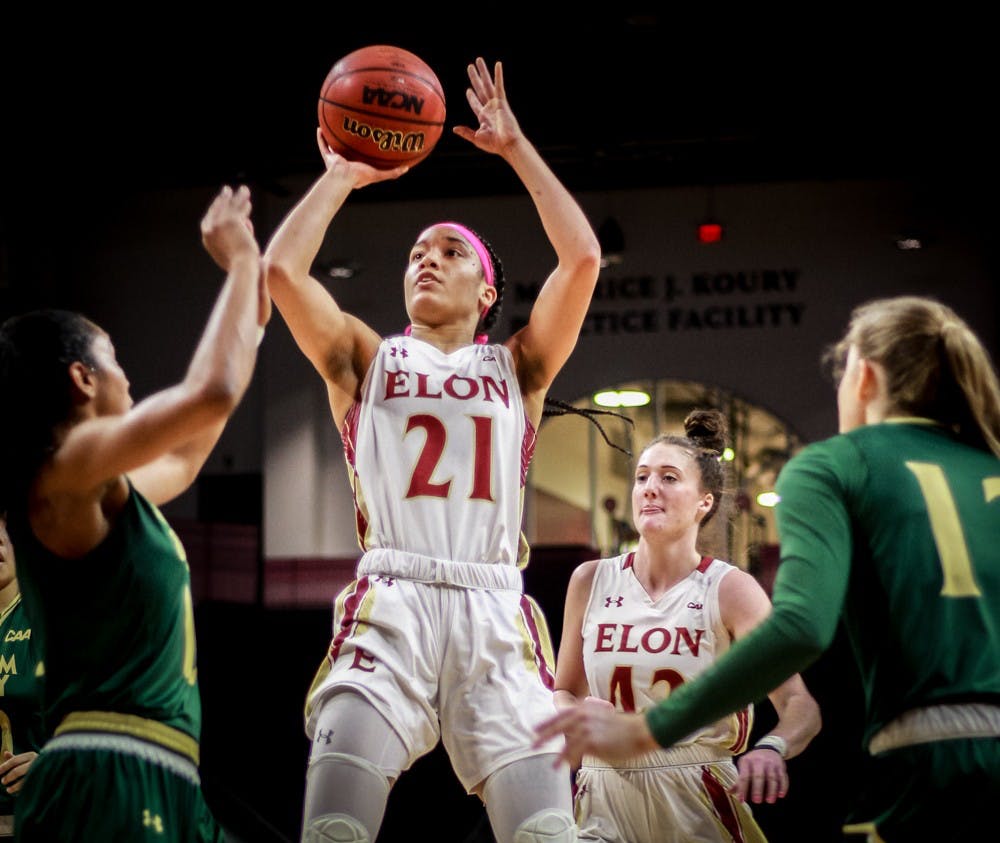 Elon University women's basketball faced off against the Hofstra University Pride on Thursday night as the Phoenix tried to break its five-game losing streak and make its last two games count. The Phoenix did come out with a win at 55-52, but it didn’t come easy. Head coach Charlotte Smith said she’d “much rather have an ugly win than a pretty loss.”

“We just couldn't get in the rhythm offensively,” Smith said about the first quarter. “I think we all were taking into our hands to do a little bit too much, you know in time, when you don’t have organization in your secondary offense, it throws off your rhythm.”

The second quarter brought a little creativity as the Phoenix took a 21-16 lead into halftime. Though the Phoenix improved its score, only freshmen guards Brie Perpignan and Kayla Liles, Munford and sophomore guard Ariel Colón, and junior guard Lexi Mercer were the players who were able to contribute.

Mercer, though still not as prevalent on the scoreboard, made her presence known, gaining four steals by the end of the second quarter and being a key player in creating scoring opportunities.

Smith appreciates Mercer's leadership abilities to be versatile but wants to see her be more successful in her shot count.

“I tell her to keep shooting," Smith said. "We have to get somebody else to step up and be a defensive stopper so she’s not the one every night taking the toughest defensive assignment.”

Schar Center was especially quiet, but the Phoenix and Pride benches made up for the lack of energy with their own. That energy eventually trickled onto the court and made for a much more exciting second half on both ends. Perpignan applauded her teammates, saying “Our energy on the court and on the bench just really pushed us.”

With that increase in energy also came an increase in aggression, and girls on both sides were not pleased with the sudden rise in it. “I think a lot of times we were anticipating the foul and not focusing on the finish,” Smith said. “It comes with growth, but we just have to not focus on the officiating, on whether or not your getting fouled, we have to focus on finishing.”

But he game continued on. The fourth quarter consisted of frequent back-to-back play, and suddenly, the Phoenix had a game to fight for. Sophomore forward Anna Popovic got the ball rolling with a long three that shot the Phoenix ahead 41-34, but the Pride kept up with the Phoenix fairly comfortably and never fell too far behind. With less than five minutes to play, a basket by Hofstra junior guard Boogie Brozoski tied the game, and the atmosphere of Schar Center shifted.

What followed seemed like the longest last minute of play, with the Phoenix putting up the first shot and the Pride catching up to them seconds after. The Pride forced a foul, but with just 14 seconds left, they made it a one-point game at 53-52. Two seconds later, Perpignan was up at the foul line and missed her second shot.

Had the Pride recovered the rebound, the game easily could’ve ended differently, but to the relief of the Phoenix, Munford rebounded it and drew a foul herself, hitting her first free throw to make the game 55-52. Hofstra tried to put up the possible tying three-point shot but was unsuccessful, and the Phoenix walked away with its head held high and its five-game losing streak broken.

“I think we all can agree there's a sigh of relief,” Smith said. “You want to go into the tournament with some sort of momentum, and I’m just glad we were able to get the win tonight.”

Liles is also excited for CAA tournament play to start.

“I just feel really confident," Liles said. "I think this win definitely gave us the motivation to keep going. We know we can win this game on Saturday, and I think that with that mentality we’ll be able to do it.”

Looking ahead, the Phoenix will play Northeastern University (18-10) at 2 p.m. Saturday, March 9, at home in its final game of the regular season before starting its run at a third straight CAA Championship on Wednesday at the University of Delaware.