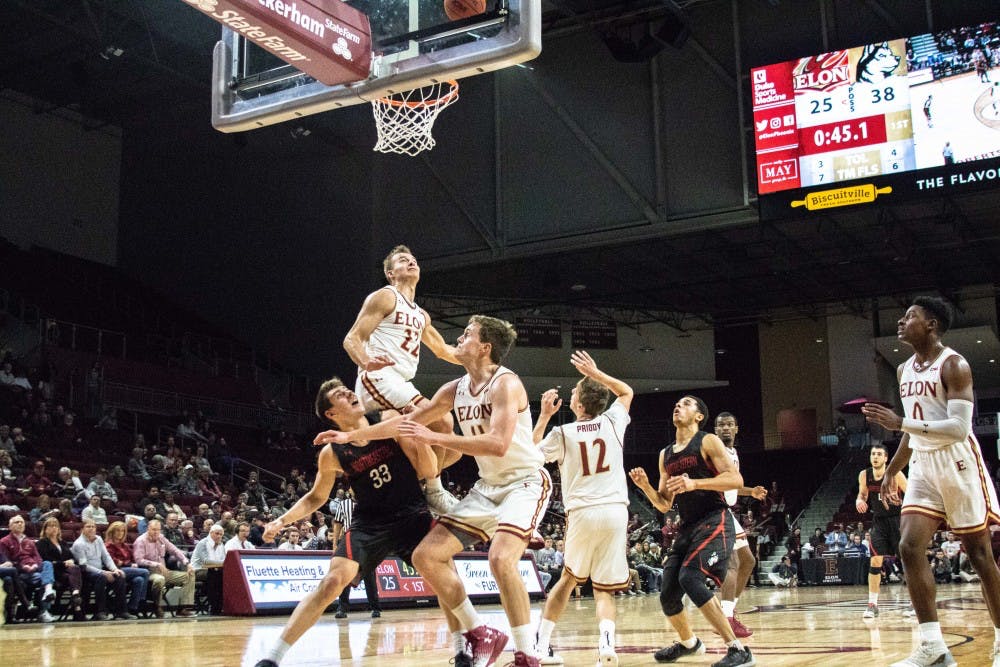 It’s March, which means conference tournaments are here for men’s basketball across the country. The Elon Phoenix is in Charleston for the Colonial Athletic Association (CAA) Tournament and the stakes are clear for what these games mean for the Phoenix: win four games in four days and the team reaches the NCAA Tournament, lose, and the Phoenix goes  empty handed and it is the end of the road for the four seniors on the team. Before dreaming of dancing with the big schools, Elon University men's basketball has to pass its first test Saturday afternoon against the University of North Carolina at Wilmington.

How we got here

Things looked bleak at the end of January. After dropping six of its first eight conference games of the year, Elon looked in disarray, despite the stellar play of senior forward Tyler Seibring. Then the Phoenix walked into Wilmington to play the Seahawks for the first time this year and beat UNCW in front of its home fans. That win was coupled with a dramatic home win against the University of Delaware and all of the sudden Elon looks as though it had gained its sea legs. But the Phoenix would suffer four straight losses after that and it looked as though they were back to square one

When Elon welcomed the Seahawks to Schar Center, it proved its worth and came out with a second win against a team that won back-to-back CAA Tournaments in 2016 and 2017. Elon followed that up by winning two of its last three games — both on the road — to come into the tournament playing some of the best ball they have all year.

How does Elon advance?

The hopes of Elon winning this game starts and ends with how it can play against UNCW’s senior forward Devontae Cacok. Cacok is leading the nation with 22 double-doubles this year and is second in the nation with 381 rebounds this year.

So far Elon has done a fairly good job of containing him, though the numbers from the first game may not show it. Cacok torched the Phoenix for 20 points and 19 rebounds in their first meeting, and then was held to 10 points but was still able to scoop up 18 rebounds in the second matchup. If the Phoenix can hold the 6 feet 7 inches forward to something close to those numbers, they should be able to put up a fight.

Who to watch for the Phoenix

Senior guard Steven Santa Ana has seemingly decided he is not going to go down without a fight in his last year. In the last two games of the year, both of which Elon won, Santa Ana played some incredible basketball. With a total of 54 points, 16 assists and 19 rebounds in the last pair of games alone, Santa Ana was the spark for the Phoenix offense. That performance was enough to have him named CAA Player of the Week and Lou Henson National Player of the Week in the final week of the regular season. That is the type of productivity Elon needs out of him.

One can’t forget about Seibring either. Arguably the most consistent player for Elon in the past two years, Seibring has the ability to hit from everyone on the court; whether it be a fade away baseline jumper, or a lunging 3-pointer from the top of the arc. If these two are finding a rhythm, they can go toe-to-toe with anyone in the conference.

It will be an uphill battle for the Phoenix, but the last two weeks of the season gave plenty of reason to be optimistic headed into the Tournament. Head coach Matt Matheny has had trouble getting his teams past Saturday in the CAA Tournament, but if you are looking for a team that seems to be peaking at the right time, Elon just may be the team to look at.