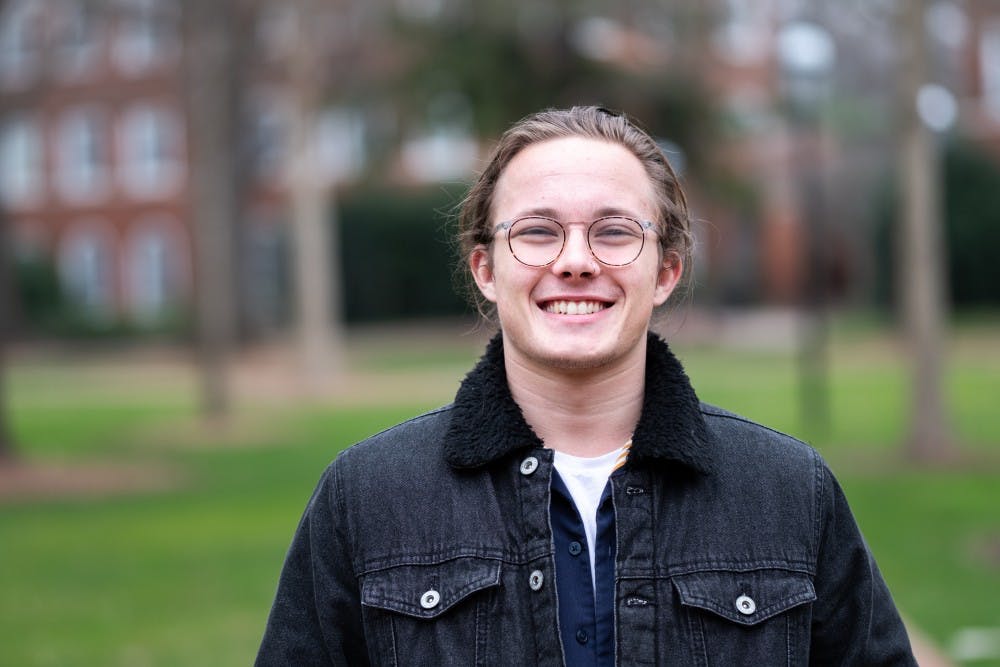 Junior Nate Jones has a tattoo on his left wrist in Arabic that translates to “to become” in English. The tattoo reminds him that people are each on "their own pilgrimage," constantly growing and finding new parts of themselves. Jones has been “becoming” since he arrived at Elon University.

He is envisioning a campaign based on inclusivity and hearing the voices of everyone on campus, based on his experience abroad and at Elon.

Though he lives in Lenexa, Kansas, he calls many places home — including Elon. Jones said he grew up living a “nomadic” lifestyle, moving across the United States — from Ohio to Florida to Missouri.

He started his Elon experience with the GAP Semester program where he traveled around the country doing service and living in the woods during his first semester at Elon.

Jones met Rodney Parks, university registrar and the GAP advisor for his program, at a coffee shop in Lander, Wyoming, where the program began. Parks showed up nearly 30 minutes late because he was getting a notebook for Jones to take with him and use to reflect during his travels. This moment stuck with Jones.

Since that day, Jones and Parks formed a relationship.

“Nate is one of those people that will do anything to help a person in need,” Parks said. “He is thoughtful, energetic and has a broader vision of the world where people recognize and appreciate each other for our differences.”

When outlining the groundwork for a Jones administration, his basic philosophy is to “figure out what we’re talking about” on campus. Words such as “inclusion” and “diversity” need clearer definitions at Elon, according to Jones. As a self-described idealist, Jones believes the university likes to discuss its strengths but struggles with being transparent.

"We want to figure out what we’re talking about," Jones said about the university's mission.

"Nate is a consensus builder, but he also does not shy away from conflict when he believes social justice issues are at stake."

Becky Olive-Taylor, director of academic advising and assistant professor of English, is a mentor and friend to Jones. Being an advisor and mentor of him since his freshman year, she said she knows how passionate he is about social issues.

“He values authenticity in his own actions and the actions of others,” Olive-Taylor said. “Nate is a consensus builder, but he also does not shy away from conflict when he believes social justice issues are at stake.”

Jones hopes to review the recent changes in the SGA budget if he becomes president. He has serious concerns about its effectiveness in providing adequate funding for student organizations across campus. According to Jones, the process was opaque and lacked student input.

“It centralized [power] a little more because then you continuously have to come through SGA,” Jones said about the new budget model.

Jones launched a campaign page on Facebook titled “Your Voice. Your Choice.” as a tool for students to emphasize their views on campus-wide issues. Students have posted comments about lack of accessibility and representation for handicap students on campus and in dorm buildings and an absence of transparency on SGA bills.

Students expressed concerns for not being able to provide input to SGA representatives on the issues at the university. Opening up more discussion is something Jones hopes to prioritize in his campaign.

“The table was not built for everybody,” Jones said, addressing the current SGA of not opening up conversation enough between groups. Jones hopes he can “build a new table” that everyone is invited to join and discuss the issues they have with the university.

Junior Ryan Wells, a friend of Jones who is aiding him in the campaign, has been working with him since the inception and said Jones’ idealism motivates him to constantly improve what he sees.

“He always holds a critical eye on the university, focusing on how we can create positive change that includes voices that have never been included at the table,” Wells said.

But his campaign is not focused on who he is. Instead, it is centered on meeting the needs of the student body.

Jones’ most critical worry about his campaign is his idealism as he wants to encompass more student concerns if elected.

“I don’t like things being about me, which is why this campaign feels very weird to me — and a little inauthentic," Jones said. "I want it to be about everybody else.”

Maggie Brown contributed to this reporting.