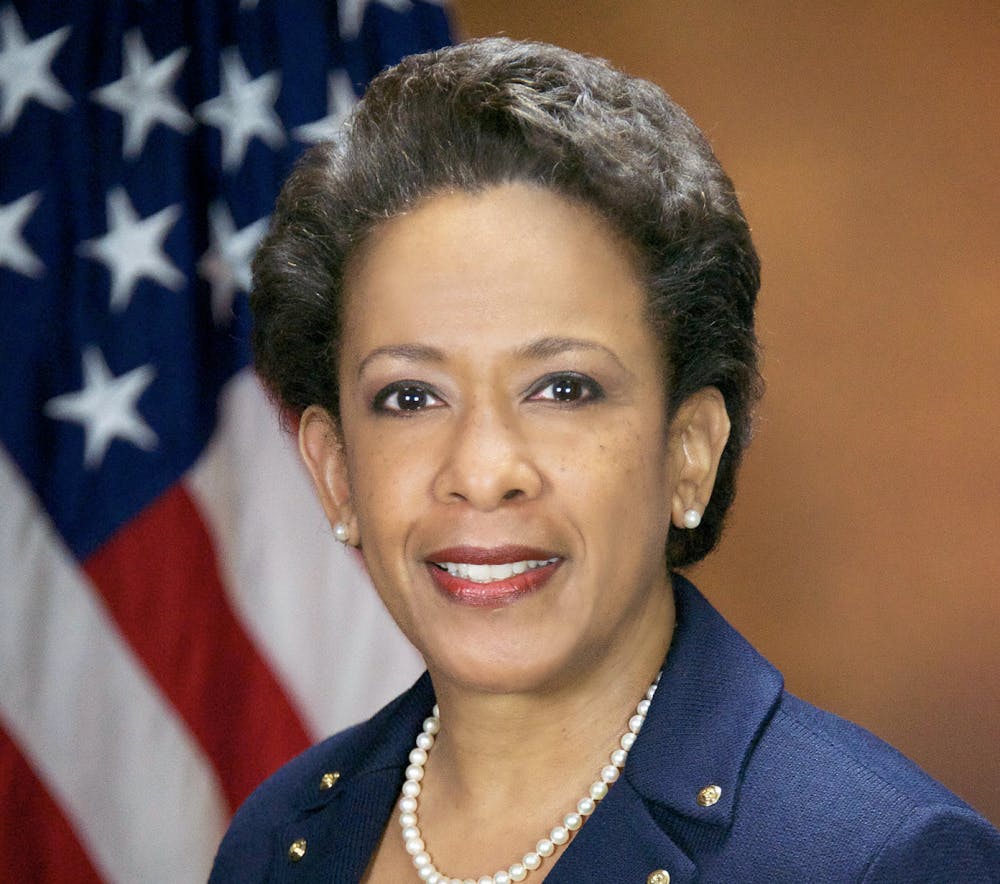 Former Attorney General of the United States Loretta Lynch spoke at the Elon University Law School as part of the Distinguished Leadership Lecture Series on Thursday night. Lynch, born less than two miles from where the speech was held, tailored her speech directly to the city which she said made her into the woman she is today.

Lynch reiterated throughout the speech the ability for the law to either repress or to uplift people, citing multiple examples of North Carolina’s battle with civil rights throughout its history.

Lynch moved from Greensboro to Durham at a young age. She went on to attend Harvard University, and eventually Harvard Law School.

“Though I moved out of Greensboro at a young age, I’ve carried the lessons of Greensboro with me throughout my life and my career.”

Lynch recalled many of these “lessons of Greensboro” throughout her speech. Lynch’s father, Lorenzo Lynch, was a baptist minister in the city and helped the students who participated in the Greensboro sit-ins, a series of non-violent protests that were influential in the civil rights movement.

“Power concedes nothing without a struggle. Nothing,” Lynch said. “The Department of Justice had to intervene multiple times over the years to thwart schemes to limit the vote.”

Lynch is referring to the restrictive North Carolina voter ID laws specifically targeting black voters. She also referred to a 2013 landmark Supreme Court case that gave local governments the authority to change voter procedure without the permission of the federal government.

Lynch, like many others, believes this decision restricts black voting.

“They rushed to pass what the fourth circuit later termed ‘the most restrictive voting law North Carolina has seen since the era of Jim Crow.’” Lynch said.

As the first black woman appointed to her role as Attorney General of the United States, and as a North Carolina native, this decision was painful for her.

“That’s nothing to be proud of,.” Lynch said.

Lynch focused on equal protection under the law. She cited House Bill Two, a law forcing people to use the restrooms corresponding to their biological sex as opposed to their expressed gender.

“I thought it was essentially a violation of equal protection,” Lynch said. “To say that because of something that is intrinsic to an individual - that is just a part of who they are, part of their own makeup - you get less protection than the person sitting next to you, is so inconsistent with our constituent.”

Lynch doubled down on her criticisms on North Carolina’s strict voter ID law, saying voter fraud is unrealistic in practice.

“First of all, who has the time?” Lynch jokingly said, followed by laughter. “By the time I get through voting, I’m just too tired to pretend to be somebody else, and do it again."

“The ultimate irony is that the area in which all experts do agree almost unanimously, the area that people see as presenting the greatest opportunity for voter fraud, that was not touched at all by restrictive ID laws, is the area of absentee balloting,.” Lynch said.

With Lynch’s sense of pride in her home state, comes high expectations for progress.

Lynch once again returns to her upbringing in Greensboro to further emphasize the importance of legal civil rights and how the discussion has evolved to include other marginalized groups in 2019.

“But on the issue of civil rights, I turn again to the lessons of Greensboro, and having been part of a people who have been vilified, objectified, denied and set aside, I have no desire to place anyone else in that position ever again, nor does the law allow me to. Nor should it,.” Lynch said.

During the Q&A session that followed her speech, Lynch was asked about increasing polarization and interpretation of the law, and she responded with optimism.

“We will survive this, we will come through changed —- a little bit battered, a little bit bruised, but hopefully with a new appreciation of the institutions that keep us all safe,.” Lynch said.

Lynch called on Elon Law students to be advocates for change, reminding her audience that the president is not the only influential voice in politics. “Government is all of us,” Lynch said.

Lynch made it clear that the way to end political turmoil is through activism.

“It only ends when individuals decide, this is not the country we want. That’s what ends it,.” Lynch said. “We are the ones we’ve been waiting for.”