In an exclusive interview, Smith talks Trump, democracy and activism at the grassroots level. 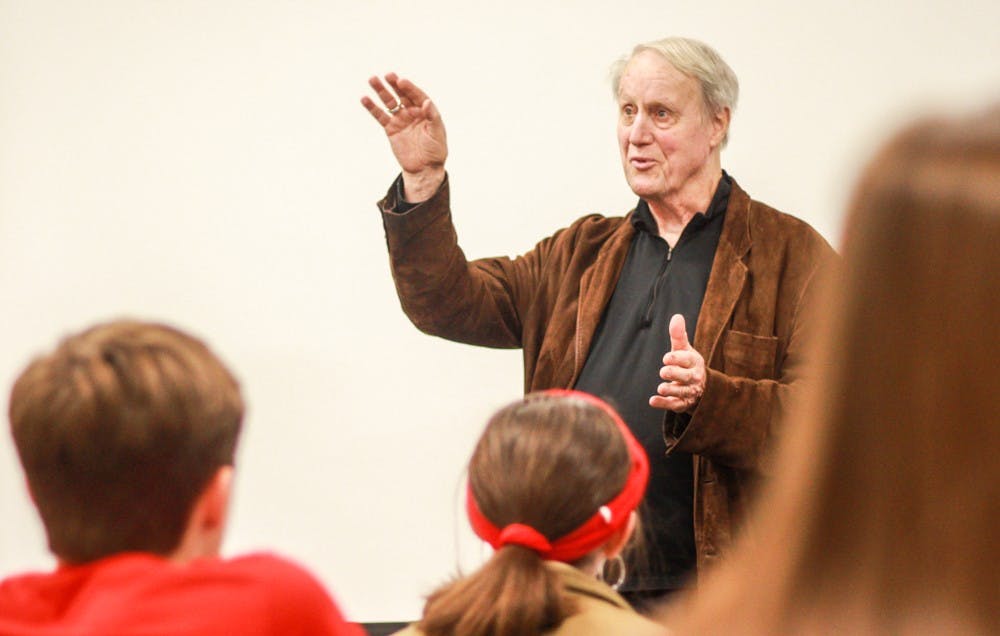 Over the past 50 years, journalist Hedrick Smith has forged a career investigating key issues such as the Vietnam War, the Cold War, Wall Street and more. On Thursday, March 14, he focused on investigating the role of grassroots activism in American democracy.

Elon News Network sat down with the multiple Pulitzer Prize and Emmy Award winner for an exclusive interview before he spoke to the Communications in a Global Age class taught by Associate Professor of Communications Richard Landesberg. Smith, who has worked for The New York Times and PBS, spoke on the issue of grassroots activism and journalistic storytelling and showed the class his most recent documentary, "Winning Back Our Democracy," which aired on MSNBC and features a companion YouTube channel.

Smith’s documentary features short vignettes about the various ways in which grassroots activism has changed modern democracy. It includes a segment on North Carolina, focusing on the Moral Monday fights against racial gerrymandering.

“It doesn’t take a genius to figure out somebody has got their thumb on the scale and tilting the results,” Smith said when asked about the reclamation of democracy in North Carolina. “This is a particularly dramatic moment for North Carolina," Smith said. "My sense is that the force for change is unelectable, it’s irresistible, it’s not going to stop.”

And this change, Smith said, is particularly relevant to the younger generation. “The voice of the people is not getting through and affecting who gets in to office," Smith said. "So in terms of your lives, there is no issue that is more important than political reform. … It’s your future.”

While visiting North Carolina Agricultural and Technical State University on Wednesday, Smith said he reminded students that state elections directly impact their educations, stating that state legislatures vote appropriations on how much money is allocated to state universities, and therefore how much tuition costs.

“Those are the kinds of connections, it seems to me, the younger people have to start making.”

And Smith said while the political issues our country is facing have grown in recent years, they run deeper than the 2016 election. “It’s unbelievable the degree to which our democracy is being corrupted by money, by gerrymandering, by suppression of vote," Smith said. "But the problem really predates it, it’s a big mistake for people to think Trump created the problem.”

Instead, Smith said Trump’s norm-breaking behavior is the result of old problems.

“Trump is a tumor, but he’s not the cancer. We’ve got to cure the cancers. The cancers are deep within our political system — we have to root them out.”

The way people are rooting them out, Smith said, is through grassroots activism.

“People are doing that! There’s reform going on at the grassroots in the states all over this country, and the media’s not covering that story," Smith said.

But sometimes this desire for change can be manifested differently, Smith said. Supporters of President Trump, who also display the “rebellion from the bottom up,” which Smith describes as taking place today, have “come to mistrust the system, they don’t believe the system is reaching out to them, taking care of them and giving them a chance, and they see Trump as their champion.”

Trump’s championing of the disenchanted lower and middle class, Smith said, plays off their fears. “Dictators play on the fears of people. Democracies try to awaken the hopes of people. We’ve got hope versus fear.”

It is a pattern that, if recognized by the masses, Smith hopes to incite action. “I think if more people know what’s happening around the country, they will be motivated to do something in their own state.”

Smith mentioned the story of Katie Fahey, who inspired gerrymandering reform in Michigan with one Facebook post, and similar incidences of action.

“When you see that happening jumping around the country, you know something, some spark has been lit," Smith said." It’s a great story, it’s an important story, and I’m a journalist who likes to tell stories … from the bottom up.”

Elon women’s Volleyball turned in a monster season. The program continues to improve as the Phoenix look to reign over the Colonial Athletic Association for years to come.