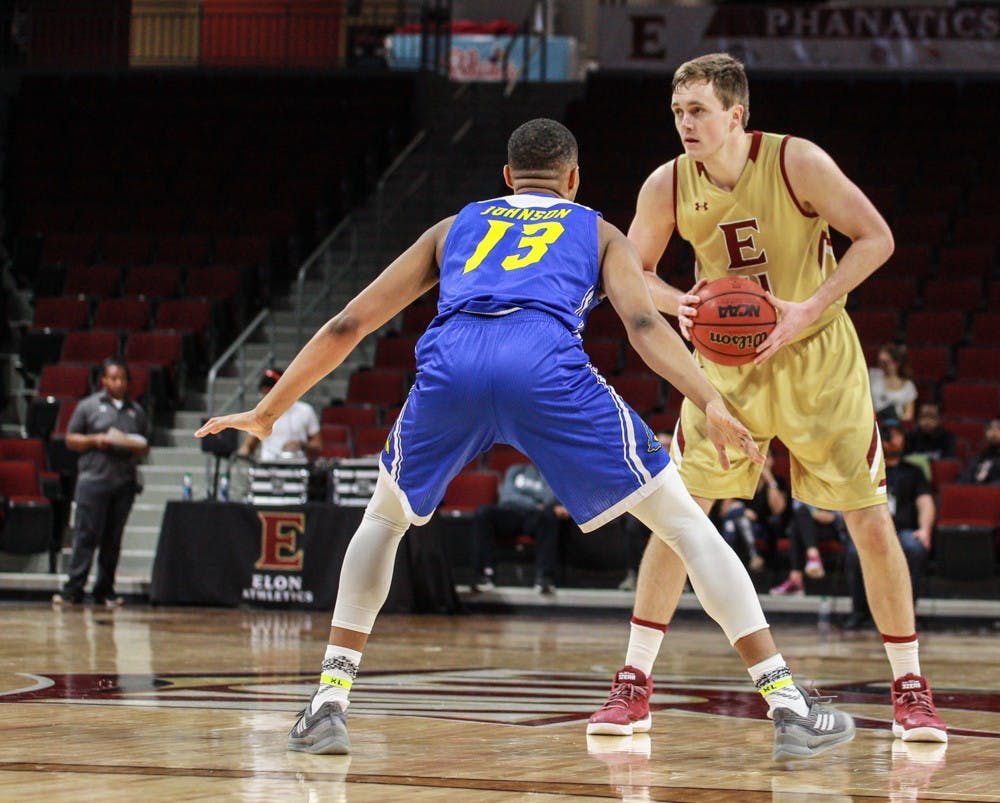 
Senior forward Tyler Seibring surveys his options against the University of Delaware on Jan. 31.

That's what freshman guard Kris Wooten had to say as he watched senior forward Tyler Seibring’s game-winning shot fall through the bottom of the net with 1.6 seconds left on the clock to give Elon (8-15, 4-6 CAA) a 57-56 win over the University of Delaware (14-9, 6-4 CAA).

The 22 points and 11 rebounds for the senior were enough to topple the Blue Hens, avenging Elon’s loss earlier in the year on the road in Newark, Delaware, and earning the Phoenix its first back-to-back wins of the season.

Seibring came down with a rebound on the defensive end of the floor to give the team a chance to win the game. After a timeout, everyone in the building knew the ball was going to one person.

“That’s the one guy you don’t want to let [get the ball],” Delaware head coach Martin Ingelsby said of Seibring.

Coming off a screen, senior guard Steven Santa Ana got tangled up with two Blue Hen defenders and Seibring at the top of the key. Two dribbles to the free throw line freed Seibring for a shot, and the Normal, Illinois, native watched the ball hit the front of the rim, kiss the backboard and send Schar Center into hysteria.

“[Santa Ana] did a great job cutting through that contact and freed up space for that step back … I was able to get a touch on it and knock it home,” Seibring said. “It was one of those slow motion ones. You’re kind of sitting there for a second, watching it.”

Elon relied heavily on Seibring to keep Elon afloat throughout the game. Santa Ana, who has been steady throughout the season, fell into foul trouble early. This limited his time to 26 minutes, and he only contributed two points.

But that’s where Wooten shined. After scoring 14 points the game before at the University of North Carolina Wilmington, Wooten again had a solid performance, this time chipping in 16 for Elon.

Wooten said the game against the Seahawks gave him confidence going into this game, showing himself he can play at a high level and make shots.

“I’ve just been trying to warm up good and keep my head straight. I know it’s going to be an up-and-down year my freshman year, so that was a big thing for me, just keeping my head on straight,” Wooten said.

Head coach Matt Matheny knows that even when Santa Ana is quiet on the stats sheet, he is still a pivotal part of leading the Phoenix.

“It wasn't his night, but he got the steal at the end of the game. He made the cut to free [Seibring]. That’s the sign of a pretty tough guy to overcome that type of adversity,” Matheny said. “He has always been a really hard worker. We challenged him, and he really stepped up. He has become a great vocal leader.”

The Blue Hens had multiple chances late in the game to put the Phoenix away with open shots, but the bounces did not go their way tonight.

“It’s a make-or-miss game,” Ingelsby said. “You’ve got to make some shots. I thought we had some good looks that we were able to get to fall tonight that have fallen in the past.”

After dropping five straight, the Phoenix have now won three of its last four games. Elon will look to continue its hot streak on Saturday, Feb. 2, when they take on Drexel University.