Elon to become more accessible one creation at a time 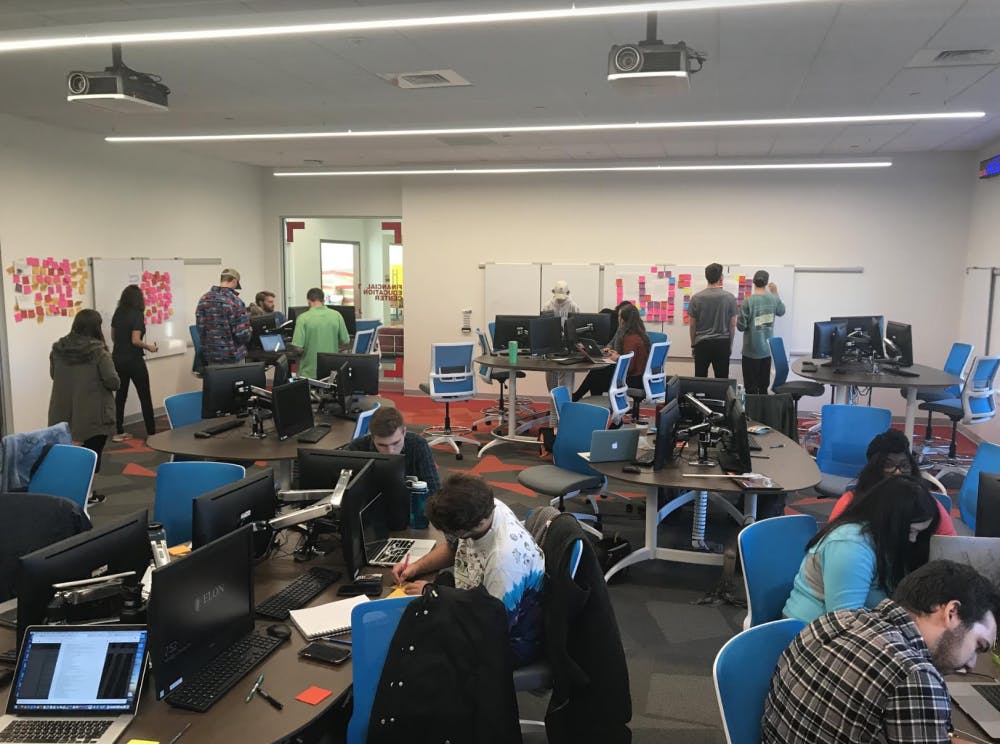 Students work on their projects for the “Design Thinking for the Social Good” class in fall 2018. Photo Courtesy of Alyssa Martina.

The drive home from her son’s 21st birthday dinner changed Nita Skillman’s life. Her car was hit by a drunk driver. Skillman has struggled to walk ever since.

Since her accident in 2015, Skillman has struggled performing basic tasks with her lack of mobility, but a class project might be changing that.

As part of the fall 2018 upper-level entrepreneurship course “Design Thinking for the Social Good,” students began a class project with the goal of making Elon University more accessible for people with disabilities. Now, students and faculty members are hoping to make their class project a reality.

Alyssa Martina, the professor teaching the class, worked in collaboration with faculty and staff from both the School of Business and the School of Health Sciences, including the school’s respective deans, Raghu Tadepalli and Becky Neiduski.

Skillman, the director of the Client and Standardized Patient Program in the School of Health Sciences, served as the “expert” perspective throughout the project.

"We've always integrated design thinking in our entrepreneurship classes, but not to the extent that we did in this class."

Martina had taught the class before but took a new approach last semester.

“We’ve always integrated design thinking in our entrepreneurship classes, but not to the extent that we did in this class,” Martina said. “We really used design thinking in this class, particularly in building empathy for the wheelchair user, and that was fundamentally different.” Tadepalli, eager to see the students connect with their work, took an active role in overseeing the students’ progress.

“In all my years as dean, I’ve never really gone to a class … But in this case … I actually went to the class in the beginning of the semester and told the students that they were going to work on a project,” Tadepalli said. “I didn’t tell them what the project was, but I said they were going to work on a project that could really make a difference to people’s lives and that I hoped that they would take this project very seriously. And if they could not take it seriously, then I said this was probably not the class for them.”

Even before the technical challenges of the project began, students were expected to go outside their comfort zones and spend time in a wheelchair themselves. According to Martina, this was a critical step in building empathy for their target customer.

While students only experienced challenges performing various jobs like going to the grocery for 24-hours, these were issues that Skillman has faced for the last four years.

Senior Asa Goldstein wasn’t prepared to encounter such a variety of obstacles.

The issues Goldstein faced while in a wheelchair surprised him. He struggled with basic tasks such as getting his clothes out of the laundry machine, pouring boiling water over a sink and cooking dinner.

“You’re really cutting off about half your body,” Goldstein said. “You’re losing about your knees to your hips.”

Junior Amy Zheng was surprised to see how people treated her when she was in the wheelchair.

“It was just such a different perspective, not only physical perspective because that was on a much lower viewpoint than everyone else, but also the emotions that pass through you,” Zheng said. “I just felt like people were staring at me, and people were giving me pity rather than trying to understand the situation.”

But Skillman and the other 25 Elon students on campus that are disabled can’t leave their disabilities behind on a whim. That’s where the designs come in.

One of the four design teams created a mobile obstacle course for wheelchair users and their families to learn how to navigate challenging terrain in a safe, controlled environment.

According to Neiduski, the course features typical and atypical terrain, including an inclement weather simulator.

Another team conceptualized a new wheelchair with a rotating base to meet Skillman’s professional and personal needs.

Zheng’s team created an attachable shopping basket, which could swing toward or away from Skillman’s wheelchair, carrying her loose items so she wouldn’t have to herself. Zheng said she and her team members are currently building an improved prototype for Skillman to use.

“All of us are definitely interested in seeing how far this could go and the potential that it has, just because the feedback that we’ve had has been so strong and so amazing,” Zheng said. “I just really want to help this community and this cause because I believe in it.”

Goldstein and his team designed a building classification system to help Skillman and others know what to expect before they even arrive.

“There are a lot of buildings on campus where just getting into the door is almost impossible,” Skillman said. “The buildings are challenging, and unless I go into that building frequently, I don’t know [what] my challenges are until I get there.”

Using Goldstein’s system, campus locations would be matched against a set of standardized criteria to determine how accessible that location is to people of all abilities. The location would then receive a letter grade on a digital map, allowing those with mobility impairments to plan for obstacles in advance. Locations that receive an “A” would also be awarded a Leadership in Accessibility Design (LAD) plaque as further recognition.

Goldstein believes having LAD-certified buildings would speak to the university’s missions of diversity, inclusivity and attracting a range of perspectives. He’s interested in implementing this system on campus.

Martina believes Elon’s administration may already be interested in making Elon’s campus more manageable for those with mobility impairments.

“I don’t want to speak for the administration, but that they have taken an interest in the accessibility issue,” Martina said. “They pride themselves on being accessible, and that they are interested in and have been interested in hearing what findings that team had and what possible solutions they have.”

While Skillman is sure the people in her department would go to great lengths to make her workspace accessible, she remains unsure if others from “across campus” would do the same.

Faculty and staff from the School of Business and the School of Health Sciences, including Martina, are already brainstorming other real-world problems for entrepreneurship students to solve in the coming semesters.