Anita Hill on Kavanaugh hearings: 'We didn't learn much in 1991’

In an interview with Elon News Network, Hill outlined her thoughts on Christine Blasey Ford's testimony and sexual assault on college campuses 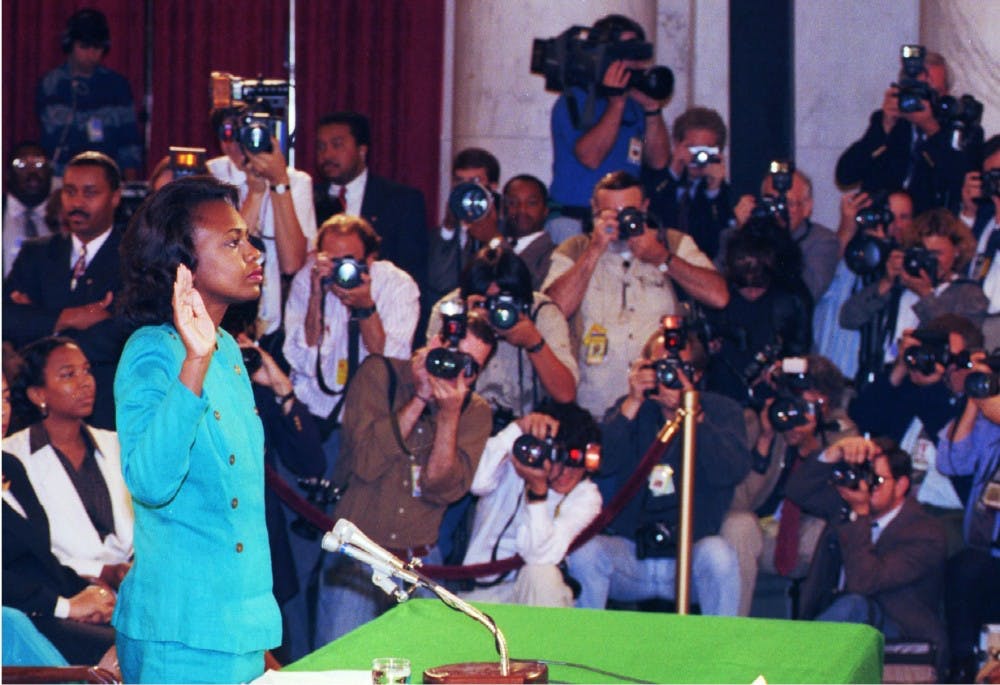 Anita Hill testifies before in the Senate in 1991. Photo courtesy of Tribune News Service.

Christine Blasey Ford isn’t the only woman to testify before the Senate Judiciary Committee accusing a Supreme Court nominee of inappropriate sexual behavior, and Anita Hill, the first woman to do so nearly 30 years ago, said ignoring the lessons from her situation led to history repeating itself.

In a telephone interview with Elon News Network, Hill said Ford’s allegations against Supreme Court Justice Brett Kavanaugh and the following confirmation process in September raised questions about how the country perceives and handles sexual assault.

But, by closely examining the actions and inaction of the Senate, Hill said it can provide an example to college campuses as they continue to wrestle with the same threats.

Hill, 62, who will deliver Elon University’s 2019 Martin Luther King Jr. Commemorative Address today, alleged in 1991 that then-Supreme Court nominee Clarence Thomas sexually harassed her with unwanted advances and vulgar comments when she worked with him in the 1980s.

After Hill and Thomas tensely testified for three days before the all-male Senate Judiciary Committee, Thomas was confirmed with a 52-to-48 vote. Kavanaugh, whom Ford alleged had sexually assaulted her when they were in high school, was also confirmed in September after both he and Ford testified.

Hill said the relatively rushed hearings in both cases, along with the lack of an FBI investigation into Ford's accusations were deeply concerning.

“I have been dealing with these issues for 27 years, and the stories that I've heard, whether there was women on campuses or women in the workplaces or women on the streets is that sexual assault is a real threat.” Hill said. “I think one of the things that the Kavanaugh hearings does is present us with this question of how do we handle these situations when there is a person of high prominence and high profile and truly in the public sphere, and how do we respond to that kind of a situation?

“Unfortunately, it seemed for many people that we didn't learn much in 1991, so we were destined to repeat some of the same mistakes.”

Now, where that mistake happens frequently is on college campuses. One in five women are sexually assaulted in college, but 90 percent of those cases go unreported. Differing opinions of consent, along with a recent proposal by Secretary of Education Betsy Devos to allow survivors to be to be cross-examined by their accused attacker during hearings further complicate the issue at a national level, among other proposed changes. Hill, who would not directly comment on Devos’ proposals, said education on consent and upholding Title IX laws are the only way for colleges and universities to make progress in this area.

“Title IX is the law that is meant to protect individuals — male, female, whatever gender you are. We should not be doing anything at this point that undermines the ability of people to be protected from this activity," Hill said. "People might disagree on exactly how it should be done, but anything that allows the behavior to continue is not only a violation of an individual's civil rights, but it also takes us back as a society when we thought we were making progress.

“We don't want to go back to the days where colleges simply ignored the problem of sexual assault or tried to hide and pretend it didn't exist or even worse, blamed victims and ruined people's lives and careers because of their own inactivity.”

Sexual assault was not as hotly debated in 1991 as it is today. The #MeToo movement was decades away, only two women had held Senate seats at that time, hearing, only 21 percent of the country believed Hill’s accusations were true, according to a CBS News/New York Times poll conducted days before her hearing.

But as time changed, so did the country. Four women were elected to senator seats in 1992, and about 40 percent of the country believed Hill a year after her testimony, according to a CNN/USA Today/Gallup poll.

Now, less than four months after Ford’s testimony, history is again repeating itself. The most diverse Congress in history was recently sworn in, and 45 percent of the country believed Ford’s testimony, according to an October NPR/PBS NewsHour/Marist poll. To Hill, this shows the country is responding to the seriousness of sexaul assult, and that better measures will be taken to prevent yet another similar episode in the future.

“I think that her testimony, as well as the reaction of the elected officials to her testimony and the sense that many people thought women especially, but many people thought that the Senate was out of touch with the lives and experiences of the people that they were sworn to represent and that it was time for new, something new. Some people, new people, new thinking, new energy and new willingness to take on very difficult social issues."