Student selected to participate in marketing management after Elon 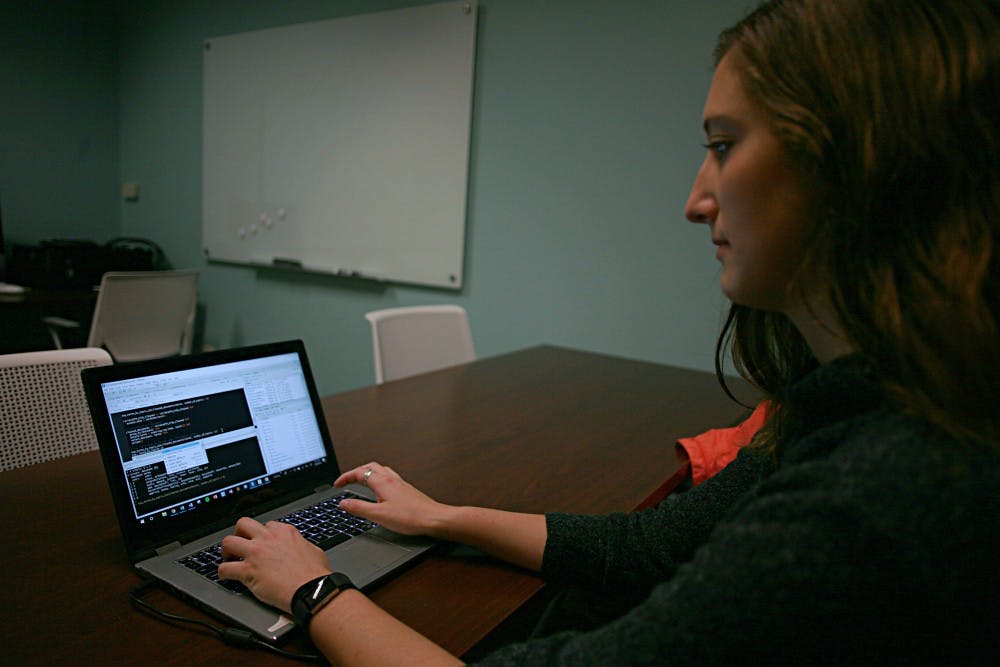 Photo by Cory Weller | Elon News Network
Senior Anna Cosentino explains some of her coding in the Center for Organization Analytics on Nov. 9th, 2018.

Elon University senior Anna Cosentino was at Pandora’s Pies when she received the call that she had been accepted into Google’s Associate Product Marketing Manager (APMM) program after a month-long application process.

“I literally just started crying — I was so excited,” Cosentino said. “It was like the most stressful month of my life basically. And I’ve known since high school that I wanted to go into tech.”

More than 2 million people apply for a position at Google every year. With an acceptance rate of around 0.2 percent, working for Google is more competitive than getting accepted into Harvard University. The APMM program itself only hires around 70 to 100 people annually.

Cosentino, a media analytics major with minors in computer science and data science, said the industry’s constantly changing nature is what attracted her most to technology.

“The culture at tech companies is more laid back,” Cosentino said. “I don’t think I could sit at a desk and do the same thing every day. ... You’re kind of guaranteed in tech that you’ll always be doing something new.”

The APMM program lasts two years, and employees are assigned to a product for 18 months. After this, they travel abroad based on their cohort, and for the last six months, they go through a mutual selection process and are assigned to an office until the end of the program.

Cosentino credits some of her success with getting a job at Google to the alumni she contacted.

There are more than 26 Elon alumni currently working for Google. Cosentino reached out to two of these alumni for advice on her resume, and once she applied, both alumni agreed to refer her.

“I don’t think – if I hadn’t had the alumni reference me – that my application would have even been looked at just because they get lost,” Cosentino said.

After submitting her resume, Cosentino participated in two online interviews and then was selected for an on-site visit with interviews from current APMM employees.

“The campus is huge. There’s people riding around in their Google bikes,” Cosentino said. She said the experience was truly reminiscent of the movie “The Internship.”

Being an intern for Elon’s Center for Organizational Analytics also helped Cosentino earn the position. This job is the first time she’s been able to work for a client rather than the company she is interning at.

The center was established in 2016 and currently employs 14 students working for seven clients.

Cosentino said a lot of the interview questions for Google were geared toward client relationships, and she was able to use her experience at the center to answer them.

Haya Ajjan, associate professor of management information systems and director of the center, said presenting a project in a classroom setting cannot be compared to the work students accomplish at the center.

“It’s completely another level when you’re representing Elon as a consultant that is basically working on real data analytics problems and you’re actually adding value to an organization,” Ajjan said.

Cosentino enjoys having a job on campus that relates to the work she wants to do after graduation. “I’m not just sitting at a desk doing homework or answering phone calls. I [am] actually doing real work for a real client,” Cosentino said.

“I’m so proud of her,” Ajjan said. “She wants to make a difference in the world, and I think she’ll be able to do that at scale now in Google.”

Following the two-year APMM program, Cosentino said she sees herself continuing to work at Google.

“I think I see myself mostly staying at Google at least for four or five years just because it’s such a big company. You can also move laterally, so if I don’t like marketing, I can move into a data science position,” Cosentino said.

Being one of the few Elon students to be offered a position at Google immediately after graduation, Cosentino said she can serve as a connection for Elon students wanting to work at the company in the future.

“I feel like I’m like a bridge kind of between Elon and Google now. It makes me excited,” Cosentino said. “It’s cool to be able to graduate but still have an impact on campus.”