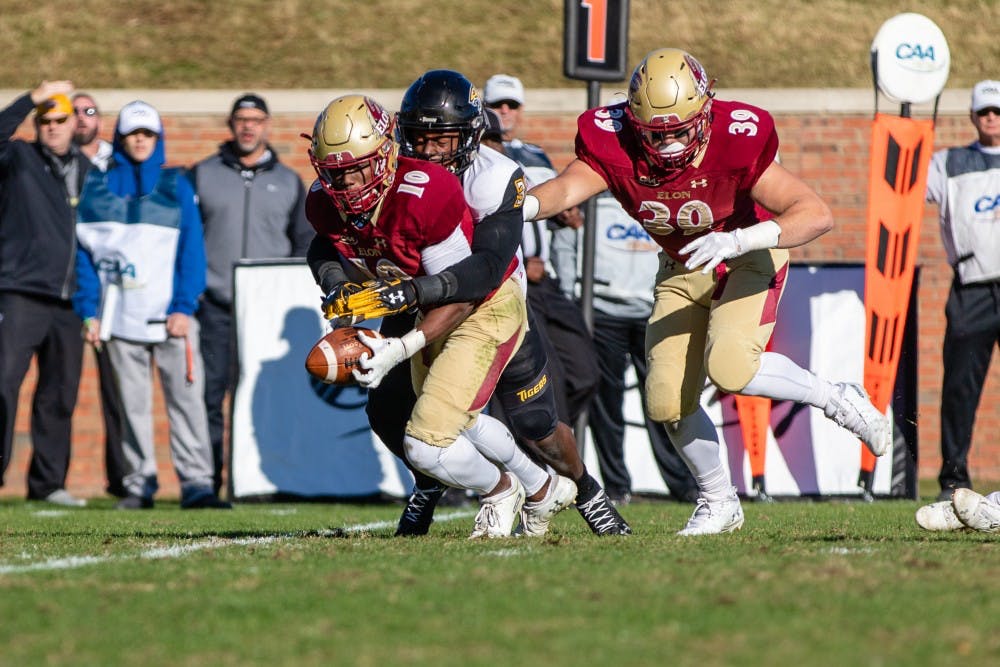 Sixteen senior Elon University football players made their way from the locker room in Alumni Field House, down the hill behind the north end zone and through the smoke, onto the field one last time at Rhodes Stadium. Running, walking or hobbling, the seniors took to the sod for their final home game.

“This senior class has been so instrumental in our success here,” head coach Curt Cignetti said. “I can’t really name every guy because I’m going to forget somebody.”

The senior class has been through a lot. In 2015 — their freshman year — together the team suffered through a 4-7 season in the Elon’s second year in the Colonial Athletic Association (CAA). The next year got even worse for the Phoenix, with a dismal 2-9 season. Its payoff came in 2017 when Cignetti took the helm and guided Elon to its first winning season since 2010.

“One day, football ends for everybody,” Cignetti said. “That’s why these guys are going to be successful in life — because they’ve got the right mental attitudes, the right work habits and they know how to overcome adversity and obstacles.”

Though Saturday’s game turned into one that many of them would probably rather forget, it was a memory that will last a lifetime. The thorough beating administered by the Towson University Tigers dampened the mood of the team after the game, but it still will be a day many will never forget.

“Today is a day they’re going to remember for a long time because this was a disappointment,” Cignetti said. “We had a pretty good week in practice, we were focused, we were excited to play, we knew everything that was at stake here, but this will be a learning experience, because any time you fail and you don’t get the result you want, there are always valuable things to learn from that.”

Met at midfield by their parents, seniors exchanged proud — and probably a bit more meaningful — hugs, kisses and handshakes with those who have been responsible for helping the student-athletes get to this point.

For some, the day was more bitter than others. Running back Malcolm Summers was accompanied by his family and a pair of crutches. He re-injured the same hamstring that sidelined him last year during the team’s landmark game against James Madison University this year. Summers has been sidelined since then and, unbeknownst to him, had his curtain call at Rhodes Stadium on Sept. 29 against the University of New Hampshire, where he rattled off 124 yards on 22 carries and a touchdown.

In a personal way, it may have been preferable for quarterback Daniel Thompson to have this final game be a blowout the way it was. Though he probably wanted the win, the loss meant he got to see the field in a capacity he had not seen since 2016. Thompson came into Elon as a quarterback and had to weather moving into the Colonial Athletic Association (CAA). Thompson ended up losing the starting job last year to sophomore Davis Cheek and has worked as the holder since then. But with 2:20 left in the game, Thompson got to stand in the backfield one last time as the Phoenix signal caller, coming full circle to finish his time in front of his home fans.

It looked as though Thompson was not going to get his shot. After scoring, Towson was able to recover a mishandled kickoff return by the Phoenix. With just under three minutes left in the game, Thompson, was forced back to the sidelines. In a second, again melancholy moment of personal luck and team misfortune, Towson needed just one play to find the end zone.

Thompson recorded no official stats — just three handoffs to his running back. But this was a moment to get back to what he was brought here to do.

Linebacker Matt Baker had a memorable Senior Day as well. Baker, who has started 39 total games for the Phoenix since arriving on campus in 2015, lived in the backfield. With two quarterback hurries and a tackle for loss, Baker would have had a career day had Tom Flacco, the Towson quarterback (and brother of Baltimore Ravens quarterback Joe Flacco), not been so elusive. On multiple occasions, Flacco was able to just barely slip out of the outstretched fingers of Baker.

And then there’s Connor Christensen. Christensen came to Elon as a gunslinger from Fishers, Indiana, holding some major Fishers High School records. He redshirted his freshman year to get to know the playbook and build chemistry. Christensen’s first year seeing action was 2015, when he made five starts at quarterback and appeared in every game played. He did pretty well, too, throwing for more than 1,200 yards and completing nearly 60 percent of his passes. But things took a turn in 2016 when he could only compete in one game due to injury. Then, in 2017, Cignetti moved

Christensen to the other side of the ball at defensive back, as Thompson, Cheek and Jalen Greene — who made the start Saturday — were all on the roster as quarterbacks. Christensen played in nine games at defensive back and held his own. This season, Christensen has also added special teams to his resume, returning punts while delivering hits still as a defensive back. Christensen had a career high seven tackles on Senior Day, including his first tackle for a loss.

Not bad for a former quarterback.

Finally, Warren Messer has made teams fear the No. 3 for the four years he has been at Elon. Starting 11 games in his first campaign, Messer made it known early that he is a force to be reckoned with, establishing himself as a presence in the Elon secondary. His breakout year happened in 2017 when he recorded a team-leading 114 tackles and was named to the First-Team All-CAA team, Second-Team STATS FCS All-American and a top-10 finisher for the Buck Buchanan Award given every year to the top defensive player in the FCS.

Messer’s leadership and poise have anchored the Phoenix defense for the past four years. His ability to make key plays and keep his team motivated and focused on the task at hand has played a huge role in the team’s resurgence.

Messer said it was the “dedication we kept to try and show people that we were great” that kept him and his teammates going.

“We were guys that were overlooked in the recruiting process during high school, so our class made it right to come in and change the culture, especially when Coach Cignetti got here to show guys that we are great players, great teammates, great guys and great leaders,” Messer said.

Messer has already racked up 78 tackles this year, and 9.5 of them have gone for a loss. He added one last cherry to the top of his already-impressive Elon sundae against the University of Rhode Island. Junior defensive back Greg Liggs Jr. batted a pass at the line of scrimmage against the Rams and tipped the ball in the air. Messer was at the right place at the right time and was able to rumble to the end zone to score his first-ever touchdown, this one clocking in at 86 yards. The Garner, North Carolina, native wrapped up nine tackles.

The trip is not yet over for these seniors. The team still has one game left in the regular season next week against the University of Maine, where they are fighting for the chance to play again. Win and they’re in the playoffs. Lose and they are at the mercy of the playoff committee.