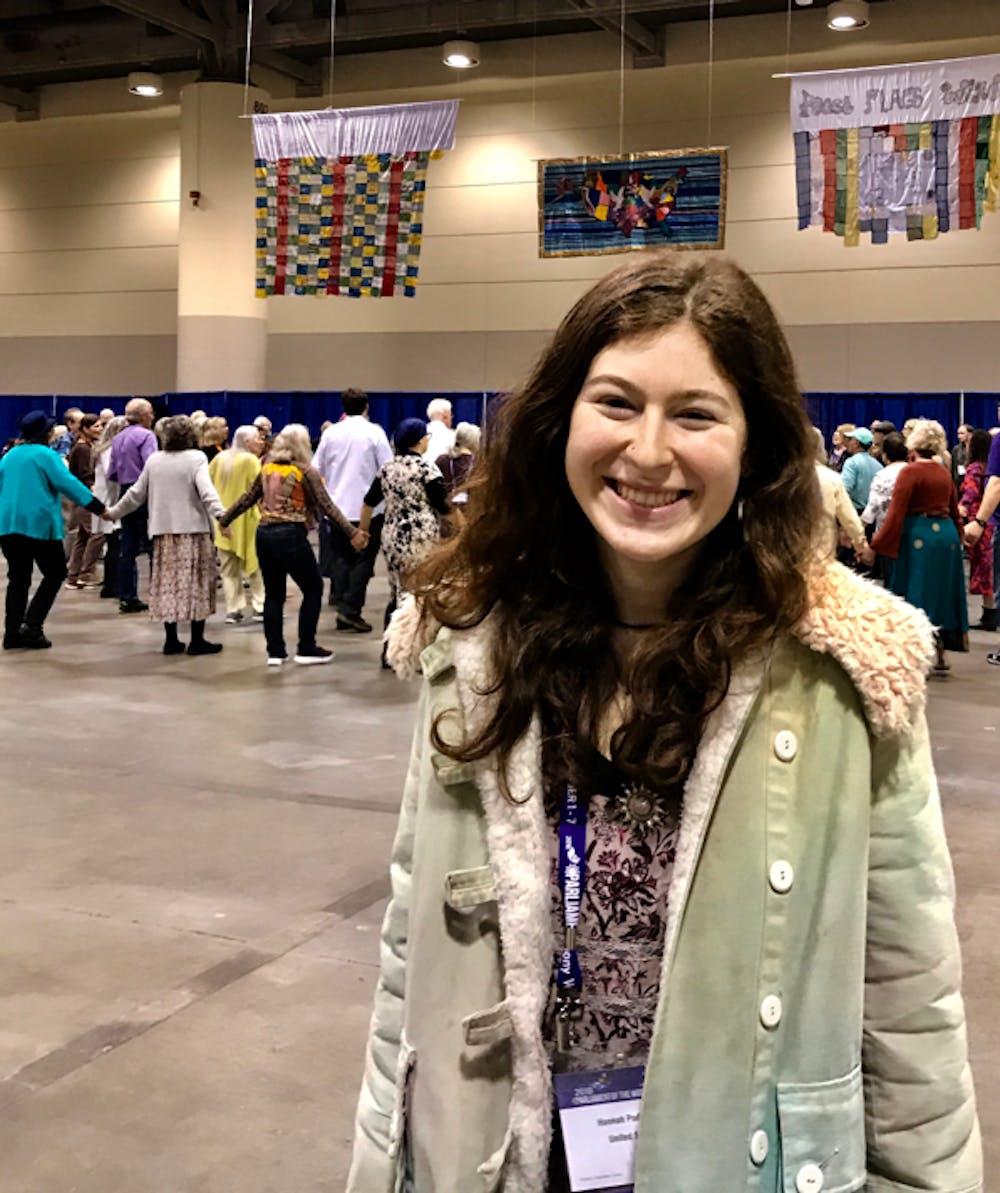 Elon University sophomore Lara Struckman had never heard of the Parliament of the World's Religions before Assistant Chaplain Joel Harter approached her last spring to speak at the event.

Wide-eyed and feeling like she was a “kid in a candy shop,” Struckman was filled with excitement when she was greeted by over 250 religions' traditions, painting the Parliament of World's Religions with white robes, black yakamas and rainbow turbans.

Overwhelmed by the amount of activities – laughing yoga, garden meditations and Tara dancing and peace circles – Struckman immersed herself in a world she didn’t know existed. She met people from around the world with all different traditions. One was from an indigenous tribe in Canada who later invited her to visit his reserve – an invitation she plans to keep.

After a week absorbed in this place, seeing the world through a warm, human lens, she is returning to Elon with an expanded view of life and a greater sense of confidence in herself. Most of these sentiments were gained from her time in spaces celebrating womanhood.

“Being in these women spaces impacted me in ways I didn’t think they would,” Struckman said. “I now feel compelled to celebrate women more and engage with that at Elon and in my own life.”

She was one of the 11 Elon students and five faculty members that have returned energized by their time with the Parliament in Toronto. These individuals represented Elon from all different academic backgrounds with a common motivation: to learn about religions from around the world.

“At a place with such diversity, someone is bound to think it’s interesting,” said junior Michelle Russell as she planned for her panel on Elon’s own interfaith Ripple conference. Russel agreed to represent Elon at the Parliament despite her fear of public speaking.

“When am I going to have the chance to do this again?” Russell said. “I couldn’t let my fears stand in the way of such an amazing opportunity.”

Standing in front of the audience on Saturday night, Russell was welcomed by warm chuckles as she confessed her discomfort. By the end, Russell has discovered a talent in presenting.

While the soft hymns of a peace circle filled the air with passionate “Shaloms,” senior Hannah Podhorzer reflected on her time at the conference.

“I have been a mulitfaith intern for three years,” Podhorzer said. “Engaging with people of different tradition, generations and countries at the Parliament has felt like a wonderful culmination of all the work I have done at Elon.”

For Podhorzer, the conference felt like a way to practice the skills she learned at Elon and reflect on her last 3 years at the school.

“Sometimes I questions if I was involved in the right things,” Podhorzer said. “This past month on campus and coming to the Parliament has confirmed that I’ve been doing the right thing.”

Before joining in the singing circle, Podhorzer spoke to the inclusion and reconciliation of her multifaith work and the humility she has learned that will stay with her for the rest of her life.

Kristina Meyer, a senior, was napping when her 6 p.m. presentation time came around. Having already presented her research at noon, her only motivation to get back in front of an audience was the adrenaline she was running off from being at the Parliament. Having first heard about attending the event in spring of 2017, she has been tirelessly working to create a panel of students that would present their undergraduate research, gaining them access to the event.

Meyer had been studying this event for years. With her research pertaining to interfaith organizations in social justice, she knew that this would provide an opportunity to expand her knowledge to a global context.

“I was proud to add something unique to the conference,” Meyer said. “It makes me more confident in my work. I saw that I pulled together something tangible from the work I’ve done and I handled myself well in the response to people questions."

Meyer was thankful to be able to attend the event as she felt it fit Elon’s initiative to engage students in global conversations while also applying it to their lives at Elon.

Harter agreed that this was an invaluable opportunity for students to learn about and experience traditions not readily available at Elon, including Sufi, Pagan, indigenous, Sikh and Baha’I traditions.

“There is so much here and so many valuable sessions and opportunities,” Harter said. “It's like drinking from a fire hydrant but also fun and inspiring to see students engage with it all with such energy, openness and curiosity.”

Watching students find different ways to connect and apply their experiences to their studies made Harter proud. For him, it was inspiring to see these individuals present on an international stage from their own wisdom, experience and research.

As Struckman was leaving her gong yoga class for another session, she expressed a sense of comfort in a place that, despite all the differences, was filled with people that had the motivation to celebrate each.

“This conference has given me the confidence to value my own contribution I can give to others spiritually,” Struckman said. “I feel rooted more in my own truth and motivated to move forward.”