After being picked to finish eighth in the conference, Elon is ready to prove people wrong 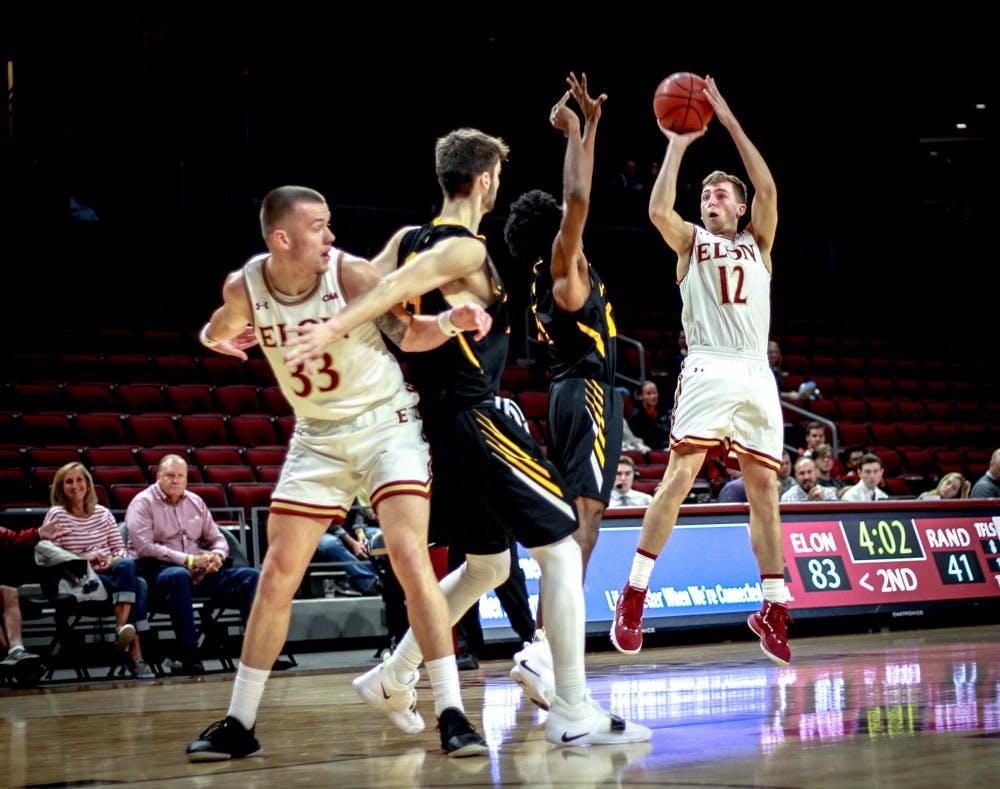 After going 14-18 (6-12 CAA) last year, Elon University men’s basketball begins its first year playing in the Schar Center starting Oct. 30. With its collection of new young players and returning talent, the Phoenix are expected to finish eighth in the Colonial Athletic Association this season.

Leading up to the season

The Phoenix were projected to finish third in the CAA last year, according to the preseason rankings in 2017. At the beginning of the year, Elon lived up to the hype, starting 12-6, including winning three of their first four conference games. But the team fell apart in the second half of the season, dropping 11 of their last 13 games. With this late season slide, Elon was seeded No. 10 heading into the CAA tournament, where they fell to the No. 7 seed University of Delaware in the first round.

The Phoenix graduated five seniors: Dmitri Thompson, Collin Luther, Jack Anton, Jack George, and redshirt-senior Brian Dawkins. Dawkins was one of Elon’s most efficient shooters and rebounders and collected many CAA awards for his work ethic and camaraderie.

Thompson was also one of Elon’s best shooters, but unlike Dawkins, he scored 1,000 points as a Phoenix, finishing with 1,193 points. Thompson has continued his career in Lebanon, playing for BC Atlas Al Ferzol, and Dawkins now plays for GTK Gliwice in Poland.

Head coach Matt Matheny is entering his 10th season at the helm and fifth in the CAA. Matheny has led the Phoenix to a 140-148 record since his time began at Elon and has guided the team to 14 or more victories in each of the past seven years.

But what separates Seibring from the traditional forward is his ability to generate offense outside the arc. Seibring hit 82 threes this past season to bring his career total to 201, which is tied for the second most in a single season. For his efforts last year and his expected output this year, Seibring was named preseason second team all-CAA.

Alongside Seibring is senior guard Dainan Swoope. Swoope serves as the director of the offense from the backcourt. Swoope tallied 126 assists and 12 points per game last season. Swoope has won many awards in his years playing for the Phoenix.

In the 2015-2016 season, Swoope was awarded the Rookie of the Week Award during the week of Nov. 23 and has also won awards for his academic excellence as an athlete. The Phoenix and Swoope hold a CAA Commissioner’s Academic Award and All-Academic Team award. Swoope also holds a spot on Elon’s all-time scoring list. With over 1,000 career points, he is ranked at 35th all time.

Among the list of freshmen who are most likely to make an impact this season is guard Kris Wooten. In high school, Wooten was named an MVP in all three seasons he played and was also a career 1,000-pointer. With his club team, Stackhouse Elite, he was also given the “Best Offensive Player” honor.

Italian native, forward Federico Poser, played on the Italian U20 men’s national team in the Istanbul Tournament in 2018 and was involved in a team that won a national championship, where he averaged 16.7 points that season.

Freshman guard Andy Pack ended his high school career as an all-time leading scorer, averaging 21.5 points per game in his best season, and was named a conference tournament MVP.

Looking at the road ahead

The Phoenix start the 2018-2019 season in Riverdale, New York, when it takes on the Manhattan College Jaspers. The Jaspers went 14-17 last year competing in the Metro Atlantic Athletic Conference (MAAC).

The team then returns home for the first men’s basketball game in Schar Center’s history against the University of North Carolina at Chapel Hill. The Tar Heels are the reigning NCAA champions and have qualified for the NCAA tournament nine times in the past 10 years. They have won the tournament twice in that time span while Elon men’s basketball has yet to qualify for the tournament.

This year the Tar Heels have added freshman forward Nassir Little, a former 3-A State Player of the Year (Florida), who is already projected to land in the top five of the NBA Draft in 2019. Little is joined by another five-star recruit, freshman shooting guard Coby White, who received all-tournament honors at the FIBA Americas as a part of the U18 team in June of this year. With the Tar Heel’s strong basketball history coupled with its NBA-quality athletes, UNC will undoubtedly be the Phoenix’s biggest challenge of the season.

On Jan. 10, the Phoenix will host the preseason No. 1 team in the CAA, the Northeastern University Huskies, at the Schar Center. Northeastern defeated the Phoenix twice in 2018, 72-60 in Boston and 81-59 at Elon. Last year, the team went all the way to the CAA conference championship game before falling to the College of Charleston Cougars in overtime 83-76, losing out on their chance to make it to the NCAA tournament.

The Huskies have not lost much of a step coming into the 2018-2019 season as they are returning its top players from last year, redshirt-senior point guard Vasa Pusica and junior guard Shawn Occeus. Pusica was named to the First Team All-CAA and was a recipient of Lou Henson All-American honors in 2018. Occeus, the 2018 CAA defensive player of the year, was the backbone of the Huskies lockdown defense. Northeastern, next to the College of Charleston, will be Elon’s biggest tests in conference play, and to beat one of them would be critical to Elon’s ranking in the CAA.

Whether the Phoenix meet their preseason ranking or surpass expectations, it will be a historic first men’s basketball season to open the new Schar Center. For the veterans of the team, it will be a last chance to shake up the CAA. For the young and developing players, this season will give them opportunities to play on the big stages against some of the best college basketball teams in the country. So when the lights go on in the Schar Center, all fans in attendance will know they are experiencing a once-in-a-lifetime season.