Getting to know the Homecoming Royalty 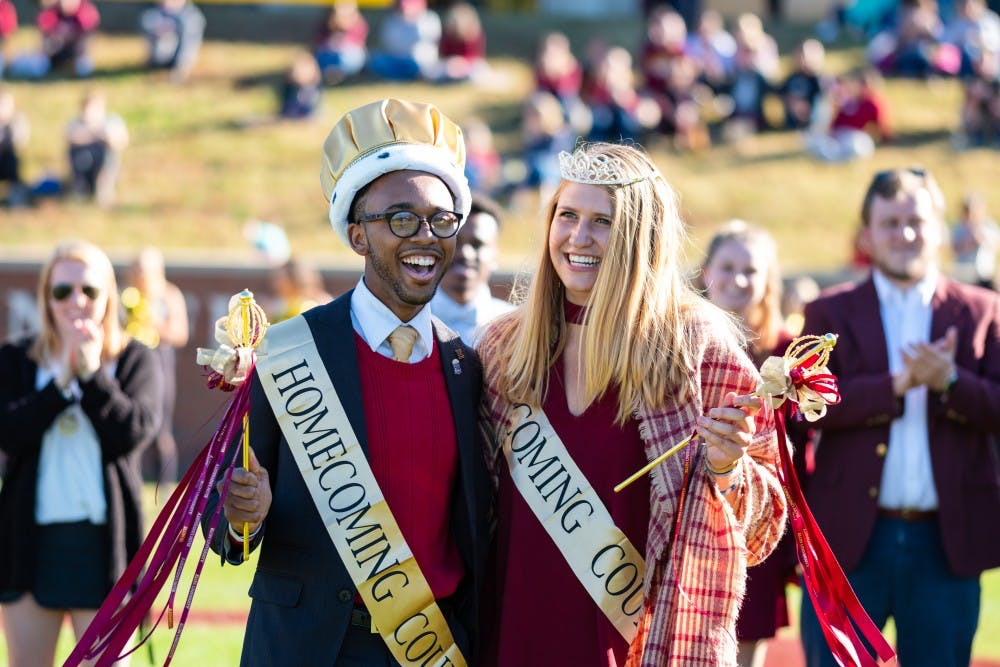 Koene is a member of the Epsilon Delta chapter of Delta Delta Delta sorority, a Students Promoting Awareness, Responsibility, Knowledge and Success (SPARKS) peer educator and a tour guide. She’s majoring in public health studies and minoring in neuroscience and psychology. She is on the pre-med track and hopes to pursue a career in pediatrics someday.

Both seniors, who were elected from a group of 20 nominees, were surprised when their victories were announced to the crowd of Elon students, staff and alumni. McMichael said he didn’t even hear his name called at first.

“When we went onto the field, everything was happening so fast, and I didn’t realize they had started announcing people’s names,” McMichael said. “I kind of, sort of heard the runner-ups, and I heard them announce Hope’s name. Then there was a pause, and people started clapping, so I started clapping, too.”

Koene said she was happy and excited when she heard her name called.

“I do a lot of work in health promotion and I’m really passionate about Planned Parenthood, so knowing that I can support a philanthropy that I really care about and also utilize my love for the Elon community, it made sense for me to kind of try out and run for Homecoming,” Koene said.

The winners each received a prize of $100 to donate to the philanthropy of their choice. Koene and McMichael’s philanthropies are both geared toward women’s rights and empowerment.

McMichael decided to give back to A BroaderWay Foundation, where he interned his freshman year. Founded by Idina Menzel and Taye Diggs, one of the foundation’s programs, which is open to girls from urban communities, is a four-weeklong summer camp in Massachusetts called Camp BroaderWay.

“It’s paid for completely all four years – sixth, seventh, eighth grade and ninth grade,” McMichael said. “During the year, they have different Broadway shows, and they tour the country and meet celebrities.”

The foundation offers mentorships with other females in different industries such as fashion design and performance. “I wanted to find a way to give back to that organization and the cool things that they’re doing,” McMichael said.

“Obviously, just considering the political climate, it’s really important to advocate that women’s health care isn’t a controversial topic; it’s something that should be a right to all people,” Koene said. “I support all the activism as well as the health care that Planned Parenthood provides to people.”

Despite the political tension, Koene said she believes her choice played a significant factor in the elections.

“I had a lot of people tell me that they voted for me on that platform because they’re really supportive of women’s health care,” Koene said.

McMichael said he believes the winners should simply be referred to as Homecoming Royalty.

“I definitely support the idea of it being Homecoming Royalty and not necessarily Homecoming King and Queen. It’s kind of dismantling this idea that everything has to be heteronormative,” McMichael said. “It should be two people who the community wants – whether it’s two males, two females or two people who don’t identify on the gender binary – to represent the university. It’s all about the spirit of the person and how that spirit is existent with Elon and how they support the university and represent the university, and it doesn’t have to be limited to their gender.”

McMichael says he enjoyed seeing the Elon community come together to celebrate the university.

“It was just a really great weekend to bring together the Fighting Christians and the Phoenix — all of the people who are part of this great community and make Elon so special,” McMichael said.