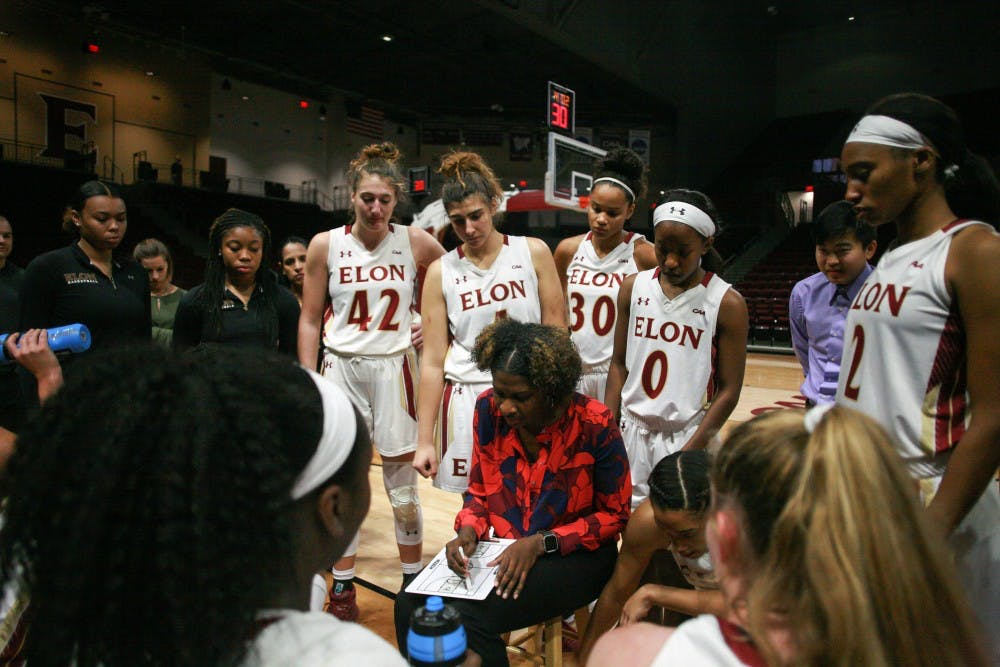 The Elon University women’s basketball team kicked off its preseason with a 58-54 victory against the Belmont Abbey College Crusaders. Though the team has started the season strong, there are still plenty of difficult matchups for the Maroon and Gold to take on.

The Phoenix finished its season last year as Colonial Athletic Association champions with an overall record of 25-8 and 14-4 in the conference. Their season ended in the first round of the NCAA tournament against North Carolina State University, but as junior guard Lexi Mercer put it, the Phoenix are “looking to go even further this year.”

The biggest question around the team seems to be where the leadership will come from. The Phoenix roster is filled to the brim with underclassmen, with just two juniors on the team and no seniors. But head coach Charlotte Smith is confident they will play just fine.

Speaking highly of her two juniors, Mercer and fellow guard Jada Graves, Smith said they “have done a tremendous job stepping up to fill in that leadership role. They lead the team, they’re vocal, they’re doing great. ... If anything, we have more leadership than maybe we’ve had in the past in terms of the actual leading and being vocal.”

While Smith recognized she physically only has five freshmen, she said she considers her roster to have eight freshmen.

The lack of experience on the team will definitely be something to watch for, but the players have their eyes on another championship and tournament run.

Saturday’s performance against Belmont Abbey featured this extremely young roster’s capabilities. Despite a rocky first quarter, the Maroon and Gold were able to quickly adapt and communicate better throughout the rest of the game. The young team is already showing signs of chemistry and will only benefit from training together over the years to come.

Catching a lot of attention is the upcoming matchup against The University of North Carolina at Chapel Hill on Nov. 6 in the Schar Center. In this matchup, Smith will get to face her alma mater for a second time.

Smith’s jersey is one of only two jerseys retired by UNC for sinking the game-winning shot to capture the 1994 Tar Heels’ first and only national title. The Tar Heels have taken on the Maroon and Gold in the past, but this is the first time the NCAA powerhouse will hit the road to visit Elon.

Last season, the Tar Heels were ranked No. 12 in the Atlantic Coast Conference (ACC) while the Phoenix were ranked third in the Colonial Athletic Association. The difference in conferences between the two teams doesn’t scare Smith.

“It’ll come down to that commitment to play the game with toughness,” Smith said. “That’s something we’ll have to work on, and playing it with a little more fight.”

Having both played and coached for the opposing Tar Heels, Smith seems confident that Elon will perform well. Though Smith believes in her team’s performance, she thinks they still need to find their identity.

Smith said that in years past, her main goal was to win championships, but this season, the approach has changed to focus on each individual game.

The Phoenix fought hard to stay within reach of the Crusaders and displayed its ability to win despite the team’s lack in size. Smith said a majority of the teams in the CAA lack height and that this lack of height in the league makes the players play more aggressively. This type of play has led the Phoenix to back-to-back championships, and the team looks to go back-to-back-to-back.

“There’s a quote that I said one day in practice. It’s that, ‘It’s not the size of the dog in the fight; it’s the size of the fight in the dog that matters,’ and that’s the thing that we have to find,” Smith said.

After hosting the Tar Heels, the Phoenix will then take a three-game stretch on the road, first to Durham to face off against Duke University and North Carolina Central and then to Boone to face Appalachian State University. Elon will have the luxury of staying close to home in the non-conference portion of their schedule as the team has just five away games on the calendar. The Phoenix only have to leave North Carolina twice, both times to neighboring states Virginia (Dec. 2 at Hampton University) and South Carolina (Dec. 9 at Winthrop University).

The Phoenix will start their quest for a third consecutive CAA championship on Jan. 4 against the Northeastern University Huskies. One month later, they will face the Drexel University Dragons on Feb. 1 in a rematch of last year’s CAA title game.

The Phoenix are heading into the season with a confident start. With a preseason game under its belt, the Maroon and Gold were able to test out its play style and work out its issues.

“It’s a totally different team,” Smith said. “We don’t have as much experience as we’ve had in the past two seasons. Last year, I thought we were young, but at least we had three seniors.”

“I think we’re very capable of scoring,” Mercer said. “We have a lot of good shooters on the team.”

So, watch out for their quick transitions and the amount of opportunities they’ll create to take shots constantly.

“We just need to play our style of basketball, and everything else will come,” Graves said.

The journey might be a long one to get to the championships and to the NCAA tournament, but Elon is ready for the challenge. As seen in the team’s exhibition game, the Phoenix are capable of sticking together when other teams fall apart.