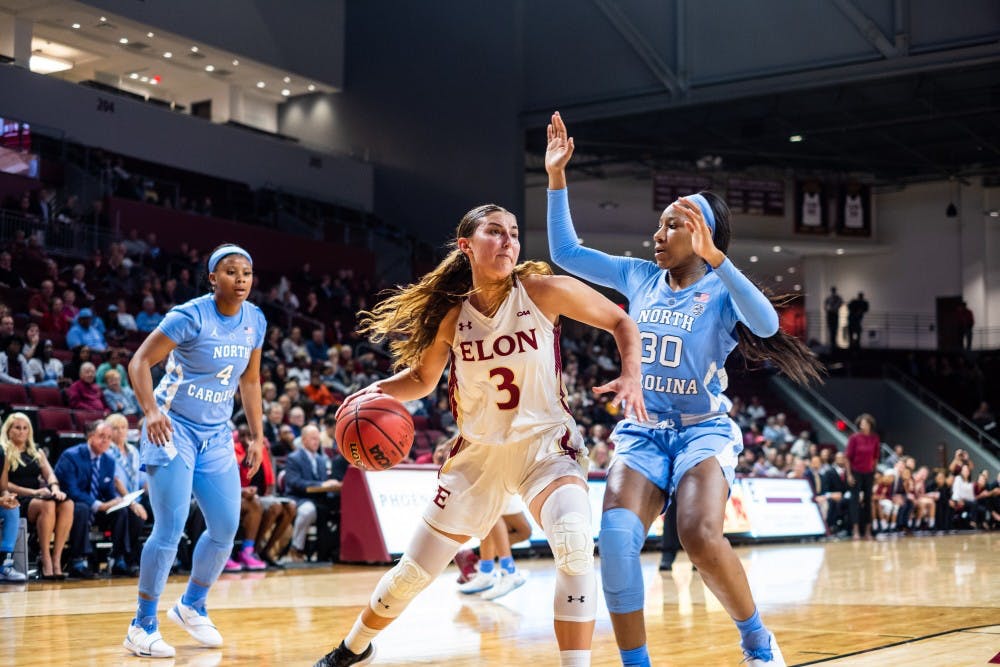 
Sophomore forward Anna Popovic drives to the basket in the home opener of Schar Center against the University of North Carolina at Chapel Hill on Tuesday, Nov. 6.

Elon University’s women's basketball team (0-1) was unable to start the reign of Schar Center in style, dropping their first game of the regular season 100-69 to the University of North Carolina at Chapel Hill (1-0) on Tuesday, Nov. 6.

It was a sloppy first half between the two teams. Missed layups, bad fouls and thrown away possessions led to a not very visually appealing first period of play. Elon got on the board with their first points from a layup by sophomore forward Emily Maupin, who drew a foul but was unable to convert the one-and-one play. Despite a distinct size differential, Elon did not seem deterred by the towering UNC players. Elon more than doubled the rebounding total of the Tar Heels 21-10 in the first quarter. Creating the most out of their opportunities and using some quick moves, Elon found itself down by just one point at the end of the first quarter.

The speed seemed to be a big challenge for the Phoenix. After every basket, UNC was pushing the ball up the court immediately to try and shake the Phoenix up in transition. Elon was able to keep up with the Tar Heels for the first quarter, using some missed layups to stay in the game. The pace of the play seemed to catch up to the Phoenix as early as the second quarter.

“What hurt us the most was when they went smaller,” Smith said. “They were able to switch a lot of things, and we weren’t able to capitalize on the switches.”

The Tar Heels came out quickly again in the second, opening up the period with the first five points. Elon was able to get some rhythm of their own going, with freshman guard Kayla Liles hitting two layups on back-to-back possessions to reel the Tar Heels back in. But the Tar Heels were able to put some distance between the two sides. A 13-2 run in the middle of the second quarter helped UNC open up a margin as high as 16 points with a minute and a half left to play until halftime.

“We made an adjustment to come out after halftime and send two people back on defense to try and stop the transition points,” said junior guard Lexi Mercer. “I think they got on a run in transition and scoring back-to-back baskets, and we got a little down on that. I think sometimes we were too worried about trying to get a rebound and we were losing our mentality to get back.”

But Elon was able to hold the Tar Heels and score the last six points of the period to stay within striking distance, down just 11 at the break. The margin Elon had on rebounds quickly evaporated as they were able to corral just three missed shots in the second quarter. Maupin led the way for the Phoenix in the first half with seven points and just as many rebounds.

Elon seemed to come out flat in the second half. After UNC got their legs and began to outrun the Phoenix, it seemed as though there was no stopping them. The length of the Tar Heels became a terror on the Phoenix and forced them into bad passes and settling for perimeter shots, all while catching up on rebounding, holding the Phoenix to another five rebounds.

“We allowed too many transition points in the second half,” Smith said. “That kind of hurt us, so we need to make some adjustments in terms of our transition defense.”

Shots were not falling for the Phoenix in the third quarter. Elon shot 7-14 from the floor, compared to UNC converting 12-17 shots and 4-8 three pointers in the third quarter. Elon lost the services of sophomore forward Jaylin Powell just eight seconds into the half when she collided with a Tar Heel. Powell was helped off the court and returned later to sit on the bench in a sling.

Things went from bad to worse for the Phoenix in the fourth quarter. Down 32 points with just under six and a half minutes to play in the game, junior guard Jada Graves went down screaming in pain, grabbing her right knee. Though Smith may very well have just lost two of her starters in the first game of the season due to injuries, Smith is constantly focused on the end goal.

“Of course this is not what I had anticipated for our home opener, but it just goes back to what we’ve done all preseason: make adjustments and keep moving forward,” Smith said.

Graves was helped off the court to cheers from all fans but was completely unable to put any weight on her injured leg.

Elon went cold for the rest of the night, with a few spurts of offense. But after the injury, the life and energy of the team seemed to be drained.

“Overall, I felt like we played hard. We played for all 40 minutes even when we were down, so I’m very proud of my team,” Smith said.

Though the scoreboard may have told a different story, Smith is optimistic that the team will take away positives from this game and get ready to make another run.