Cheat Sheet: Reacting to the death of journalist Jamal Khashoggi 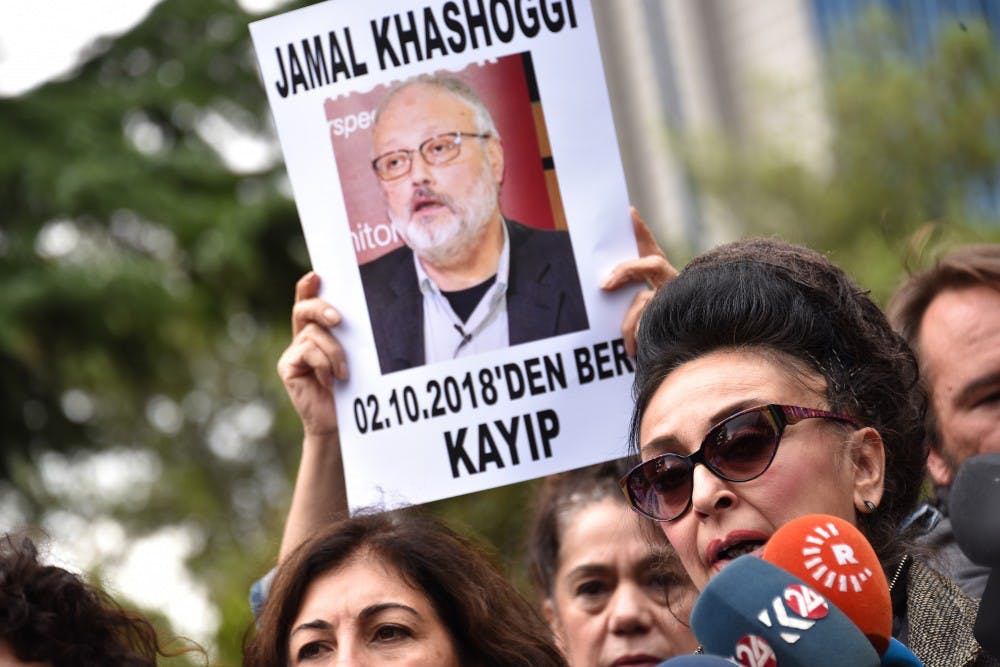 Protestors demonstrate at the entrance of Saudi Arabia consulate over the disappearance of Saudi journalist Jamal Khashoggi, on Oct. 9, 2018, in Istanbul. Photo courtesy of Tribune News Service.

For the Cheat Sheet each week Elon News Network breaks down complex events by interviewing a relevant expert.

On Oct. 2, Saudi journalist Jamal Khashoggi disappeared from the Saudi Consulate in Istanbul, Turkey. Eighteen days later, the Saudi government announced his gruesome death. The specific details of what happened the day the journalist went missing remain unclear due to different accounts from the Saudi government and from Turkish officials. Assistant professor of communications Ahmed Abdullah Al Fadaam offers his perspective as a fellow journalist.

Q: What was your reaction, as a journalist, to Khashoggi’s death?

A: Actually, I was shocked about the way he was assassinated — inside his country’s consulate, this never happened before — but, I don’t find it strange because we all know about the human rights violations in Saudi Arabia. Their constitution is based on Shariah law, and if you check the kind of punishments they have, it includes beheading, it includes hand chopping. Some of these punishments are considered by other countries as barbaric, so this also tells us that they tend to get rid of their opponents in an ugly way.

Q: What steps should news organizations and individual journalists take to ensure their safety?

A: Unfortunately, in regions like the Middle East, there are no guarantees. I covered the war in Iraq for almost 10 years, and during these 10 years, I received multiple death threats from armed groups in Iraq. I was treated poorly by the Iraqi police and the Iraqi army. People used to say that it is dangerous to say anything about Saddam, but after 2003, it became dangerous to say anything about anyone. They claim that they have democracy in the Middle East, but apparently, it’s a fake expression — there is no democracy in that part of the world.

Q: What would you tell aspiring journalists, who are now afraid of reporting in dangerous areas?

A: If you go to the Middle East to cover any of the events there, you have to be very careful about what you say and what you do. When covering the war in Iraq, I was very careful about everything because they won’t hesitate to use any mean to get rid of you if you’re a threat to them. Does this mean that journalists should stop doing their jobs? I don’t think so, no. This is who we are, this is what we do; our job is to inform the world on what is happening.

Q: How do you feel that the United States and news publications should move on from this death?

A: This is something I have been wondering about. What is so special about Khashoggi’s death? ... If you look at what Saudi Arabia is doing in Yemen, for example, they’ve been bombing this country daily since 2014. ... But nobody is talking about it, why’s that? If you look at what’s happening inside Saudi Arabia, all the human rights violations they’re doing against their own citizens, nobody is talking about that either, why is that?

In the case of Khashoggi — and this is my opinion — because it became the focus of every other media organization in the world, the American government couldn’t ignore this anymore, even though it was committed by Saudis. If you check the statements from President Trump, he first said that maybe it was a rogue killer and that maybe we’ll dig into it, now after the Saudis admitted that Khashoggi was killed inside the consulate, this is when President Trump changed his tone and said that if the Saudis were behind it there would be some severe punishments.

Saudi Arabia is an oil producing country — if we remember what happened in 1973 when the Nixon administration decided to help Israel in their war against the Arabs, and oil exports to the United States were cut, this caused the U.S. economy to collapse in 15 days.

It’s not something the United States wants to do when it comes to oil. If you check what Mohammed Bin Salman has threatened to do, if there are any punishments from the U.S., is to stop the oil flow. It’s all connected. Yes, what happened to Khashoggi is a heinous crime, but are we giving the Saudis what they deserve?