Legacies and legends: Women's basketball preps for match-up with UNC 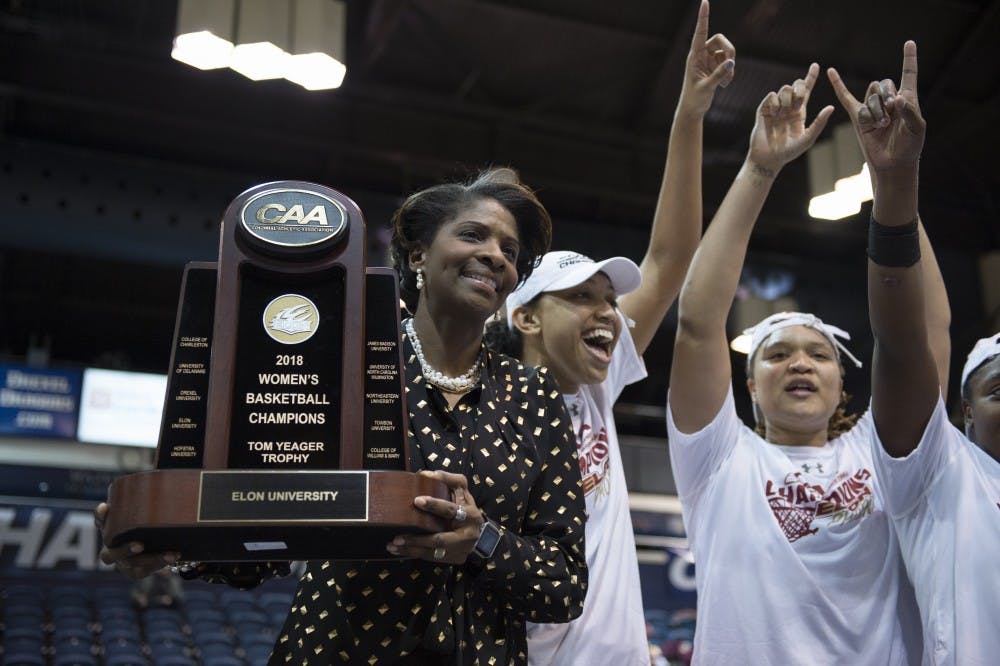 The year is 1994. Bill Clinton is president of the United States, Forrest Gump is tugging heartstrings in theaters and current Elon University women’s basketball head coach Charlotte Smith is playing for University of North Carolina at Chapel Hill.

On April 3, 1994, with just 0.7 seconds on the clock, Smith shakes her defender and drains a three-pointer to give UNC their first — and to this day, their only — national title.

Since that day 24 years ago, Smith has gone to the WNBA and worked as an assistant coach for her former mentor, UNC women’s basketball head coach Sylvia Hatchell.

But that was then, and this is now.

Smith is now in her eighth season guiding the Elon women’s basketball team as the sixth head coach in program history. Smith has had just one losing season with the program, when her 2013-2014 team dipped one game below the .500 mark to finish the season. Smith got her team up to speed in a hurry since joining the Colonial Athletic Association (CAA). In the four years they have competed in the new conference, Smith’s team has won it twice.

Now moving into this new season, Smith gets to take on different challenges. Her biggest challenge may be making her new house her home. Smith and her team moved from the corner of Haggard and North Williamson Avenues to their new residence in Schar Center down the street. The move may not have been a large one in terms of distance, but the atmosphere compared to their old digs in Alumni Gym could make anyone’s head spin.

With the 5,100-seat, 160,000-foot, nearly $40 million convocation center looking to make a splash in its first year on campus, it seemed only fitting that the teams playing there get star treatment and a big game to ring in the new space. For the women’s basketball program, that meant welcoming in the UNC Tar Heels, Smith’s alma mater.

Smith knows very well just how rare of an occasion it is for UNC to give schools this opportunity.

“It’s an honor to be able to play this game because typically, Coach Hatchell does not play a lot on the road in the non-conference. So, we were excited to be able to get them to come to our gym,” Smith said. “UNC has a great tradition and a great reputation, so it should be very exciting.”

Director of Athletics Dave Blank noted there was a little bit of luck involved in getting everything to fall in place and get these two teams together to open Schar Center.

“The relationship with Coach Smith on our side and Coach Hatchell on their side, it just fell into place as something that would be a great thing to do,” Blank said. “This year, we got lucky with the NCAA changing the opening to Tuesday, so we’ve positioned the women to play on Tuesday and the men to play on Friday. We didn’t want to have to collide with each other, and it ended up working out great.”

Another challenge Smith is facing this year is the youth of her squad. The Phoenix yet again are one of the youngest teams in the country. With just two juniors and no seniors on the roster, it’s going to be up to the less experienced players to win this year. But to Smith, mindset and culture mean much more than age.

“You have to give them confidence, and I think a lot of the confidence derives from our tradition and our program’s legacy and the things that we’ve done against top competition,” Smith said. “We’ve been very competitive in those games, and so they just have to realize that if you go out and compete to your highest potential, anything can happen.”

But this isn’t the first time Smith has had to deal with youth.

Last year, the Phoenix was lucky enough to be anchored by three very talented seniors, but they were still headlined by a large freshman class, making up half the roster. Smith has taken what she learned in her time in Chapel Hill to help develop her coaching approach. Smith reflected on the “holistic approach” Coach Hatchell had, getting prepared to take on anything. From daily quotes to life lessons, Smith knows Hatchell shaped who she has become today as a coach and person.

“One of the things I’m really big on is journaling, so I went back and read my journal from last season, and it was some of the same stuff that I’m seeing now. So I’m having to encourage myself to get wiry in what we’re doing and be patient in the process and know that things will get better each day,” Smith said.

This isn’t the first time Smith has taken on her old school and former place of employment. The teams met in Chapel Hill two years ago, and the Phoenix gave UNC all it could handle, taking the Tar Heels to the wire and falling in a 78-73 decision on Smith’s bobblehead promotional night.

Smith is excited to get the opportunity to coach against her old mentor once again. She knows that while they are very close off the court, as soon as they step on the hardwood, it’s all business.

“We know each other pretty well. And some of the things that they ran, I brought here and tweaked them a little bit,” Smith said. “I always tell my players, ‘There’s a defense for every offense, and there’s an offense for every defense and, may the best man win.’ So we’ll see how it turns out.”

Though the matchup with UNC may seem like the biggest challenge of the year for the women’s basketball team, there are many tests in the schedule. Before getting to conference play, Elon must go through a tough non-conference schedule, which Smith hopes will continue to make the team better.

“We always learn something when we play against tough competitors. We have Marist coming in as well as UNC and also Auburn, so those will be games where we test ourselves and learn a lot about ourselves. And so I’m excited because any time you present yourself with a challenge, you not only become better as players, but we also become better as coaches,” Smith said.

While Smith has been used to hunting for titles in her time at Elon, she knows this year will present different challenges. For her team this year, it’s about taking the schedule day by day.

“We have to get better each day. That was the key to our success last year,” Smith said. “It’s just a learning curve we have to try to shorten and take it one game at a time and just try to get better at something each day, and eventually we’ll find ourselves clicking around tournament time. So that’s the goal.”