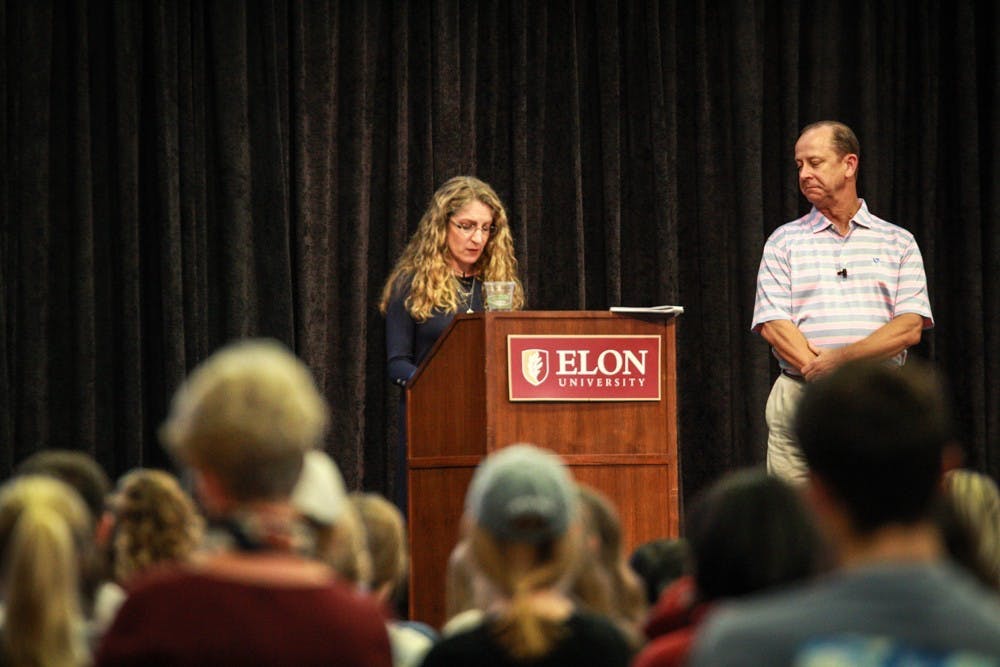 Photo by Abby Gibbs | Elon News Network
Evelyn and Jim Piazza speak on behalf of their son, Tim Piazza, who was killed in a hazing incident in February 2017.

Updated at 6:13 p.m. on Oct. 3, 2018 to correct the flipping of the numbers in regards to the amount of alcoholic beverages Tim drank in the hazing ritual the Gauntlet. Elon News Network regrets the mistake.

From the day he was born, Jim Piazza imagined celebrating his son Tim’s 21st birthday. They would go to their house on the Jersey shore and celebrate the monumental day with beers on the beach. Tim and his brother would cheers with his first legal drink at Zeno’s Pub, the popular bar at Pennsylvania State University.

But instead, Jim celebrated his son Tim’s 21st birthday by speaking to a crowd of college students about his death.

Tim’s death was the result of hazing in February 2017. He was a new pledge of Beta Theta Pi fraternity and partaking in a hazing ritual called the Gauntlet, during this ritual he consumed 18 alcoholic beverages in 82 minutes.

After the drinks, Tim fell down a flight of stairs leading to the basement of the fraternity house. His fraternity brothers then left him on a couch, pouring water on his face and slapping him as they attempted to wake him up.

His fraternity brothers didn’t call 911 until the next morning.

Hope Koene, an Elon University senior and team leader in the Students Promoting Awareness, Responsibility, Knowledge and Success organization, was friends with Tim in high school. Koene said she can’t imagine her senior year of high school without him.

“This kind-hearted, always-laughing guy who would do absolutely anything to help a friend was left to die at the hands of people who called themselves brothers,” Koene said in her speech last Thursday. “And it’s heartbreaking to know that all we can do is imagine what it would be like if he were here today.”

Koene is one of the three program coordinators dedicated to organizing National Hazing Prevention Week. She said her goal is to open the eyes of students at Elon so nobody will have to lose a friend like she did.

“The most dangerous thing for students, whether or not you’re affiliated with Greek life, is not talking about hazing,” Koene said. “It becomes this taboo topic where if nobody talks about it then things can go to those extreme measures and someone could die, which is so horrible, but it’s a reality.”

According to a study by the Economist, 41 people have died as a result of hazing in the past decade.

In their speech, the Piazzas said nobody tends to care about hazing until someone dies. They want their son to be known as more than a statistic and a tragic death.

“He was just a great guy,” said Evelyn Piazza, Tim’s mother. “He was funny, but he had a temper on him. If he wasn’t winning a board game, that board game was destroyed. He liked playing sports but he got frustrated when it wasn’t going well.”

Jim said his son liked to be a protector for his friends and family, but it wasn’t until after his death that the Piazzas realized how much of an impact Tim had had on the lives of others.

“The week between when he passed and when we had the funeral, [we] had a lot of his friends over the house,” Jim said. “One of the girls that lived next door to him [at Penn State] knew him for not even a year and said to me he had been the nicest person she had ever met in her life.”

Tim’s parents said they are sorry their son had to be the one to suffer. Every day they grapple with themselves over why it happened and, more importantly, why it was allowed to happen.

“I’d like to understand why they killed our son, why they didn’t call for help,” Evelyn said. “Why nobody, ... all the people in that house ... guys and girls ... nobody picked up a phone. You just can’t comprehend that. They knew he was hurt.”

He had rushed previously but didn’t get bids. Jim remembers the moment vividly. They were standing in the Rose Bowl watching Penn State take on University of Southern California in 2017 when Tim said he was going to rush again the spring semester of his sophomore year.

“I was like, ‘I really don’t see the fit, but whatever makes you happy; just be smart.’” Jim said. “I regret every day that I didn’t have a more direct, definitive conversation with him.”

Evelyn suspects he didn’t get any bids before because he wasn’t willing to give up his schoolwork or health for new member events. She still doesn’t understand why Tim needed to rush in the first place.

“He had his girlfriend, he had his roommates, he had his friends — it’s not like he needed that,” Evelyn said. “He had such good experiences in high school with being a part of a select group that I think he was looking to recreate that and just have some sort of tight-knit brotherhood.”

That brotherhood is what Matt Stranzl, president of the Elon chapter of Beta Theta Pi, was looking for when he rushed in February 2016 – a year before Tim’s death.

As a fraternity brother, Tim’s death sent a shockwave through all chapters of Beta Theta Pi.

Stranzl recalled the reception of the news at Elon. “You never expect something like that to happen,” he said. “It was just really an unfortunate series of events that led to what happened.”

To Stranzl’s knowledge, there has not been an incident of hazing in Elon’s chapter of Beta Theta Pi. Regardless, he realizes the importance of facilitating the conversation.

“The most important thing is that everyone needs to be on the same page,” Stranzl said. “I can only be in one place at one time and I don’t always know what all 80 people are doing. Having conversations about what the pledge education process is gonna look like … and explaining that we can never budge on doing certain things is the most important thing.”

As part of a legally binding agreement with the Piazza family, Beta Theta Pi national is requiring all houses to be completely substance-free starting in 2020. Additionally, all pledge education programs must be approved by advisers.

Even though Stranzl said he can’t recall a hazing incident in his chapter of Beta Theta Pi, Greek life at Elon has been disrupted by hazing before.

The Pi Kappa Phi and Sigma Pi fraternities were suspended in Spring 2015 for allegations of hazing until Spring 2018.

Also in 2015, Kappa Sigma fraternity’s new member events were suspended after pledges were found in a Virginia cemetery in the early hours of the morning. But those are only the reported ones.

The Office of Student Involvement declined to comment on the incidents.

Jim urged student leaders, such as Koene, to step up and put a stop to hazing.

“You need to put in place strict rules and you need to enforce them,” Jim said. “Rules without enforcement, they’re not followed. You need to be aggressive in your enforcement. The student leaders, they need to learn to say, ‘No, not on my watch. This isn’t going to happen. I’m not going to take that risk. I have a lot of future ahead of me that I don’t want to jeopardize.’”

Despite what happened to their son, the Piazzas are diligently working to carry out his legacy.

The Timothy J. Piazza Foundation has raised over $400,000 in a year and a half, according to the Piazzas. The foundation funds mobility technology to help build prosthetics for those in need. It was inspired by Tim’s dream. Tim was studying engineering and ultimately wanted to build prosthetics for children.

The Piazzas are also pioneering anti-hazing legislation. If passed, their bill will make hazing a felony punishable by up to seven years in prison and a fine of up to $15,000. It will also create tiers of misdemeanors based on the level of hazing.

Evelyn Piazza says every day she wakes up and goes to bed thinking of her son.