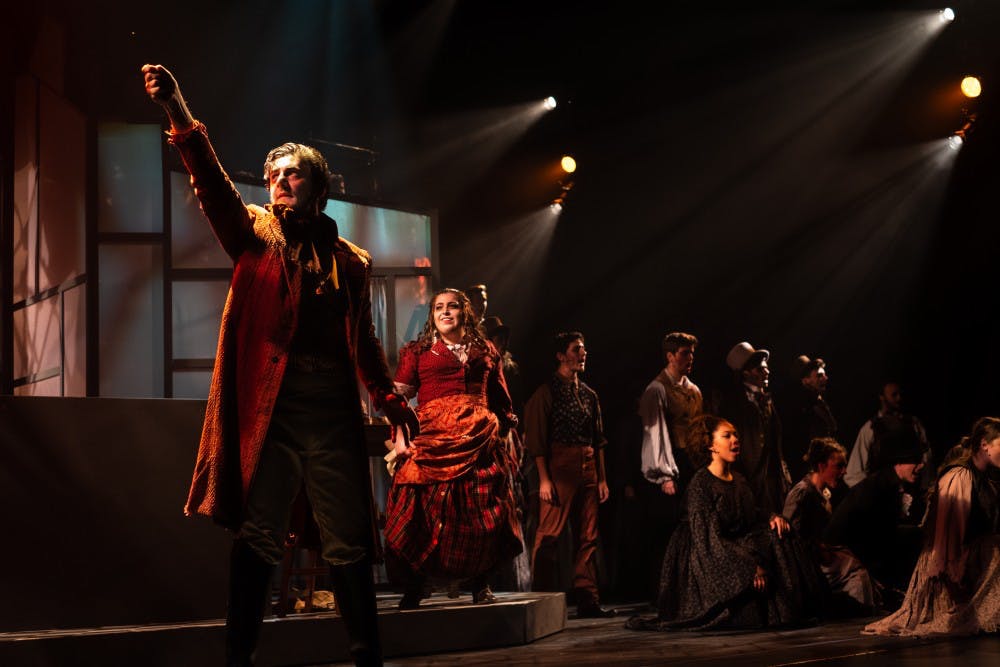 During the first dress rehearsal of Sweeney Todd, Alec Michael Ryan — who plays the titular character — reunites with his old razors on Monday, Oct. 22. Photos by Liam O'Connor | Staff Photographer.

Then, with a flicked cue, the organ began to play.

The music of “Sweeney Todd: The Demon Barber of Fleet Street” was written by composer Stephen Sondheim. From Oct. 25 to 27 and Nov. 1 to 3 in McCrary Theatre, his score will underlie the story of a broken barber exacting bloody revenge.

Kevin Lacey, a sophomore musical theater major and the assistant music director, joked that Sondheim decided the parts by sitting on the piano keys.

“You’ll listen to the person sitting next to you, and they’re singing a half a step up,” added junior ensemble member Andrew Purdy. “It’s complete garbage on its own, but in the bigger picture, it sounds so cool.”

Sondheim wrote certain music to represent each character, and at different points in the production, the music turns to layers and layers of these different sections, one on top of the other.

“He’s taking little pieces of songs and intentionally placing them on top of each other. Just playing with them,” Purdy said.

“The whole thing is built on intervals — spaces between the notes that are really small, and follow a certain pattern,” Liat Shuflita said, a junior who plays Mrs. Lovett.

Sondheim’s music is rich with motifs, which means the same few notes are played over and over again to help carry the story’s themes. One is a motif of three notes that appears in five different songs, sung by five different characters.

“You would not know what to look for unless you are literally staring at the score,” Shuflita said. “It’s brilliant, and that’s what makes Sondheim so tricky.”

The trickiest number for the ensemble to perform is the opening of Act Two, “God That’s Good.” The actors must balance quick movements with a slow-motion sequence; they sing over one another, and their words are practically unintelligible to the audience.

“When a human being consumes another human being, it has mental side effects,” Banister said. “I truly believe it’s written the way it is because we’re literally going crazy from eating humans. Our brain is falling apart.”

Making the show their own

Music director Valerie Maze recalls giving a lengthy speech the first rehearsal about learning Sondheim. “Sweeney” was done at Elon 10 years ago, but the artistic team today is completely different. Maze didn’t use the old show for reference at all.

“We’re creating our own piece of art. It’s completely different people — you can never have the same show twice,” Lacey said.

Throughout the process, she would continue to intersperse details about theory and technique. This contributed to the knowledge many of the actors learned in music theatre literature. They examined the structure, music, book and themes of other Sondheim shows.

“Sondheim is like its own genre because he’s truly a genius,” Purdy said. “It was just so mind-bogglingly brilliant.”

“Every single bar is there for a purpose that propels the story forward,” Norwood said. “It makes the music a lot harder to learn for the actors because there’s often chords and melodies that don’t necessarily make logical, musical sense. It was written to be a complete story, not a smash hit soundtrack.”

“I think as an audience member, you can learn so much about how music is effective on stage by a production of ‘Sweeney Todd,’” said Max Segarnick, freshman ensemble member.

Practicing and perfecting the vocals

Before they can educate the audience, the performers have to learn the show for themselves. It’s all about repetition until it settles deep in muscle memory.

“You have class, but you also have homework for the show,” said sophomore ensemble member Katie Brnjac. “I’ll find myself in accounting, thinking of the songs and the notes.”

As the show’s music director, Maze works through these notes with the cast. This is her fourth Sondheim production, and since she comes from an opera background, she was excited by the show’s complexity. Maze spent weeks prepping scores.

“I probably listened to the recording 50 times before September rolled around,” Maze said. “It’s good for the singers to learn music this complicated. I think it helps their musicianship and teaches them a lot.”

She relies heavily on Lacey and university accompanist Haidee Dollak — who has played in four productions of “Sweeney Todd” before — to get the music taught, rehearsed and up and running. They also did a lot of private coaching because the music is different than many of the actors are used to singing.

“It’s some of the hardest music in the musical theatre canon,” Lacey said. “But once you get it, it sounds so gorgeous.”

It’s a mix of operatic, which they’ll typically learn in class or voice lessons, and the music theatre style — a verifiable vocal workout.

“You’re singing crazy, crazy high in one song, and then the next song, you are down as low as you can go,” Brnjac said.

Each character has its own set of challenges. For some, it’s juggling crazy notes — high Cs or high Ds. Certain soprano parts are too high to get out any consonants, so the number depends on altos to annunciate.

“It’s so high that unless you go straight to the vowel, it’s not coming out,” said sophomore ensemble member Audrey Flowers. “It’s all the way up there in the rafters.”

Still, she agrees the whistle-scream fits with the sound of the show. It’s not supposed to sound “good.”

“We joke that it’s like a dog bark at that point,” Brnjac said. “It sounds like yipping.”

Shuflita sings patter songs — which are fast with a lot of words. In the finale, the timing of the song has different beats for her character and Alec Michael Ryan, who plays the title role. While the orchestra follows Ryan, Shuflita is on a completely different time and tempo.

“I’m going on my own tempo, that I set, opposite the orchestra,” Shuflita said. “Still, at the end, we have to line up. It was the hardest thing for me to learn.”

The dissonance and tension in the vocal harmonies often made the actors second-guess whether or not they were singing the correct note. They say it can be frustrating.

“You just have to trust that you know its notes and that your training is solid,” Brnjac said. “You hear the music, and you think it sounds so wrong. But these notes are ingrained in my body now.”

In the first few weeks, actors would sit alone in a practice room, plunking out the notes, singing the same songs over and over. In Scott Studios, they sat in chairs in front of Maze and played through the show, part by part.

“Usually the backing of a song will help the performer, but not here,” Lacey said. “With Sondheim, you have to be able to count. You have to be able to hear your own part and do it for yourself because he will have written a completely different thing for the accompaniment.”

“It was all challenging, but not impossible,” said Breia Kelley, a senior ensemble member.

After learning their parts individually, it was time to sing it together.

“It was a wall of sound,” Brnjac said.

It became important to sing each song purposefully. Catherine McNeela, the director, would encourage this by giving the actors certain “intentions” for certain songs. An intention sounds simple — for instance, the direction to sing a line in order to pinch, or seduce, or pet. The phrase “swing your razor wide,” for example, should carry the intention to terrify the audience. It’s a particularly important tactic in “Sweeney Todd.”

“The ensemble songs can seem like the same song with slightly different lyrics,” Flowers said. “If we sang it with the same intention over and over again, it would be boring for us — and really boring for the audience.”

“I think they breathe new life into like everything we’re saying,” Brnjac said.

Sophomore Eddie Falshaw, who plays Tobias Ragg, is the youngest cast member in a leading role. He was excited to tell his character’s musical arc through Sondheim’s music.

“We talked all about circumstances and objectives, but it’s the first time I’ve been able to put all of that book work into effect,” Falshaw said.

As it drew closer to opening night, the performers took special care preserving their instruments. Flowers spent a day on vocal rest to ready her voice. She wore a marker that said “vocal nap” and didn’t speak throughout her classes.

There are all sorts of rituals that singers engage before going on stage in order to warm up, and if any show calls for proper preparation, it’s this one. Some methods are familiar — chugging water, eating a piece of watermelon or apple, chewing gum. Others, not so much — downing a vanilla milkshake, drinking soda, or munching Lay’s
potato chips.

Before Ryan becomes Sweeney, he goes through a 15- to 20-minute warmup. The show is so vocally demanding, he couldn’t sing the show without it.

“I have to do everything I can to be prepared,” Ryan said.

He also uses a steamer before he begins the show, which isn’t uncommon among his senior class.

“It’s a little device that has a mask and blows steam in your face,” Ryan said. “It’s the most immediate way to moisturize your vocal chords.”

Putting all the pieces together

In the final week before the show opens, the cast must adjust to the presence of the orchestra. In rehearsals previously, the performers were used to finding their cues from the piano.

Maze sits in the center of the orchestra pit, where she has a view of the spinning set, the industrial set pieces and most importantly, whoever’s singing.

The overwhelming consensus is that the challenge of Sondheim is something to be celebrated.

“As complex as Sondheim’s music is, what makes him so brilliant is that he’s able to express such simple human experiences through such wacky music,” Purdy said.

Purdy said he almost cried the first time he heard it all together. Assistant director and junior Jasmine Nicole Walters has chills every time. Falshaw gets goosebumps just thinking about it.

“When you’re behind the table, it’s like you see it from a different lens,” Walters said. “It all makes sense. Like, 'That’s why the music director would tell me to sing it this way.' You learn a lot about storytelling.”

Gearing up to perform

It’s clear during these last few rehearsals — between calls of “wrong organ music,” ringing bells, questions of “When should this fade out?” and Dollak’s quick scales — that each step of the process, collectively, honors Sondheim’s work by telling Sweeney’s story.

“It’s crunchy, but it’s on purpose,” Flowers said. “You hear it, and it tingles the back of your spine.”