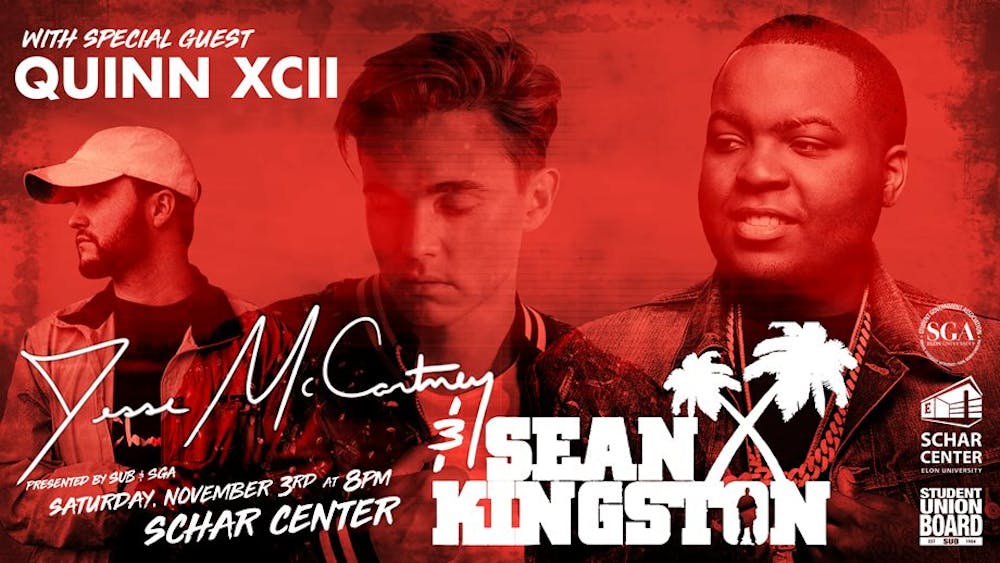 Jesse McCartney, Sean Kingston and Quinn XCII will headline Elon University’s 2018 Homecoming Concert on Nov. 3. This will be the first concert held in Elon’s new Schar Center and the largest concert held at Elon.

“This is a huge year for our university,” said Colton Cadarette, concerts director for the Student Union Board. “We have a new president, a brand new arena and we really wanted to create a marquee event.”

Cadarette said the three performers were chosen based off results from a survey sent to students last spring, combining the most requested music genres: pop and hip-hop. Jesse McCartney, who just began his 2018 tour, was the first performer booked and the rest of the concert was designed to create a “throwback” experience.

SUB originally planned to have one major performer headline the concert. But with a budget of $130,000 – after a special allocation of $65,000 from SGA – SUB realized the cost of the performer, the pricier production costs of the Schar Center and a 4 percent North Carolina performance tax would make hosting a single big-name performer unaffordable.

In the spring, SGA voted unanimously on granting SUB a one-time allocation of $65,000 to support a larger performer in the new venue. The allotted money is being strictly divided between the three performers.

The majority of the production costs will go toward constructing a stage, but in comparison to the former Colonnades parking lot venue, Schar Center requires a production team to rig lighting and sound equipment. Estimated operational costs for the concert, which come directly out of SUB’s original budget, are estimated to be over $50,000.

Not only does Schar Center require more production elements, but with a bigger venue comes larger security challenges.

“Schar has so many doors and when you look at that building and you just think about it, there’s too many entrances and exits,” Cadarette said.

SUB predicts a bag policy will be put into place, limiting the size of bags carried inside the venue or only allowing clear bags.

“We want to make sure that it’s safe but also a relaxed and fun atmosphere,” Cadarette said. “Expect bag checks, expect to be wanded … we want to overdo it so that people feel safe but not overdo it to the point where people are uncomfortable.”

Schar Center usually seats 5,100, but with the addition of a stage, the venue’s capacity will be divided into sections to spread out those in attendance.

When reserving tickets, students and staff members can choose floor, which will be mostly students in a standing room area, lower bowl or upper mezzanine seats.

Within the first 24 hours of announcing the event, on Sept. 26, over 2,700 student tickets were reserved on Phoenix Connect, breaking Elon records as well as national university concert ticket records, according to SUB.

Freshman Luke Stoddard expressed his excitement for the concert lineup. “It’s really cool that we got Jesse McCartney and Sean Kingston. … It’s a throwback that I can appreciate,” Stoddard said.

Tickets are free for students on Phoenix Connect until Oct. 17, and the price per ticket for students will be raised to $20 on the day of the concert.

“We can do this show if we charged for zero tickets,” Cadarette said. “It’s about sort of incentivizing to make sure students are picking up their free tickets and also making it clear, like we want you to be here, and we were giving you this opportunity, so take it.”

Alumni can register to pick up tickets via the Office of Alumni Engagement, and tickets will become available to the public for $30 beginning on Oct. 10.

With the new concert venue, SUB hopes to continue diversifying the concert audience to reach the greater Burlington and Elon community as well as to continue welcoming friends of students and alumni to the concert with guest tickets.