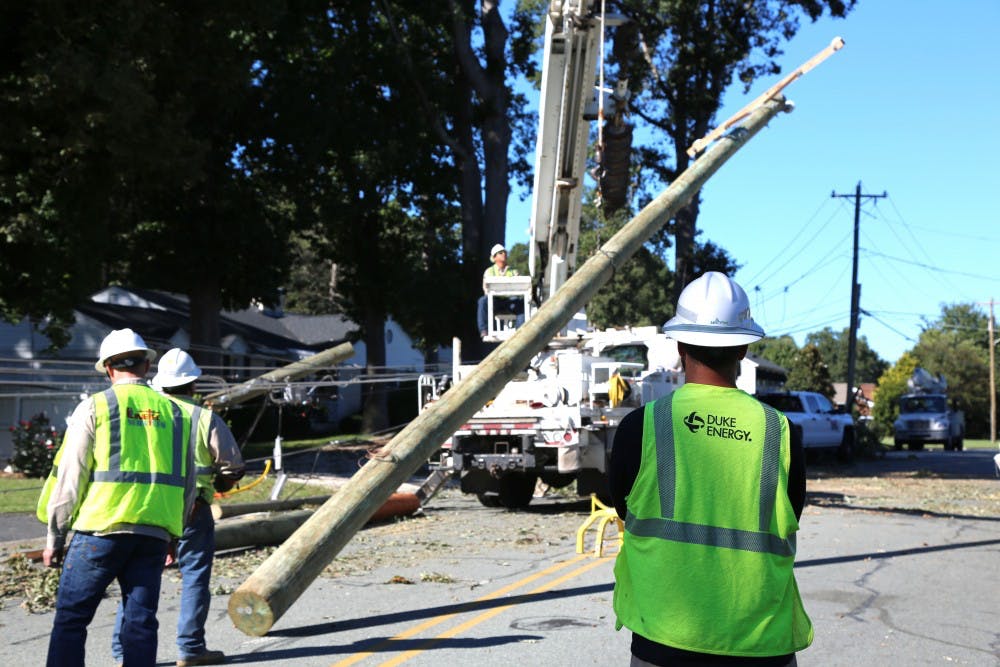 
A Duke Energy employee watches crews from LineTec Services as they lift a downed power line off Briarcliff Road on Saturday, Oct. 13. Duke Energy has stated that all power in Alamance County should be restored by Tuesday night.

BURLINGTON — A downed power line on Briarcliff Road has been returned to its original position after the forces of Hurricane Michael knocked it down around 4:30 p.m. on Thursday.

That power line has cut off electricity to surrounding homes and, according to Duke Energy workers on site, "could be the one affecting Elon."

Since Thursday afternoon, the Station at Mill Point and South Campus were without power. According to Mill Point staff, there are an estimated 55 students staying at Mill Point over Fall Break, and for the last two nights, Elon had opened the Moseley Campus Center as a shelter for students without power.

According to an email sent by Jon Dooley, vice president for Student Life, the new location for students without power would have been the Alumni Gymnasium in Koury Center. The university had planned to provide mattresses, blankets and pillows and had encouraged students to bring their own sleeping bags.

On their current outages website, Duke Energy estimates that power in Alamance County should be fully restored by 11:45 p.m. on Tuesday, Oct. 16. As of Saturday evening, 9,637 residents in Alamance County are still without power.

Two of those affected residents were Elon alumni David Vaughn '79 and David Pinson '82, who were both without power since the power line on Briarcliff went down.

Pinson, who lives on Saddle Club Road, was prepared to lose electricity.

"We've got battery-powered fans and lights, and we've just been eating stuff out of the freezer," Pinson said. "My wife and I have been okay, just hunkering down and enjoying the quiet. Going to save a lot of money on our power bill next month."

Despite being without power, both men stayed optimistic that they'd have electricity back before Tuesday evening.

"I'm grateful that no tree fell through the roof and that everyone is OK," Vaughn said. "A power outage is what it is. It's an inconvenience, but at the same time, we deal with it and do what we can with what we got."