Local sweepstakes cafes to close by next Monday

The Burlington Police Department is buckling down on sweepstakes cafes after a string of criminal activity beginning in 2017. 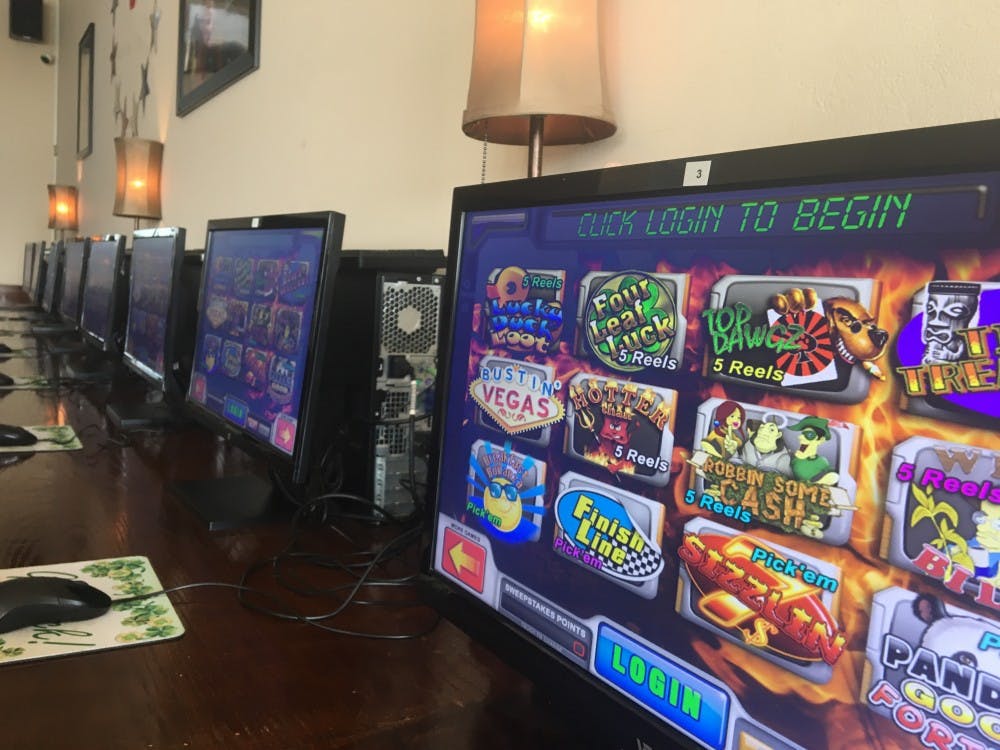 From the outside, it may look like a dollar store — or at least it did to a group of Elon University students walking by. But on the inside is a virtual Las Vegas, illuminated by the light from computer screens displaying tempting internet games.

Because of the dangers of online gambling, the Burlington Police Department (BPD) is starting a crackdown on sweepstakes cafes such as Dollar Doz-It beginning Oct. 15. This action comes following a string of crime including a murder in 2017.

On April 8, there was an armed robbery at Gone Fishing Sweepstakes on North Church Street in Burlington.

According to records from the North Carolina Court System, four people were charged with a variety of felonies between April 8 and 18 in 2017 as a result of
the incident.

Lieutenant Alan Balog, a member of the criminal investigation division at the BPD, says sweepstakes cafes are a magnet
for crime.

“What we’ve experienced on our end are shootings, stabbings, armed robbery and murder across an extended period of time at a wide number of these establishments,” he said. “They started to become a real problem as it relates to armed robbery in 2017.”

According to the American Gaming Association, internet sweepstakes are estimated to earn $10 billion a year, “with games that closely mimic the experience of a traditional slot and video poker machines.”

According to Balog, there are currently 25 sweepstakes operating in Burlington. But by Oct. 15, all must be shut down.

“Starting Oct. 15, the police department will fully enforce the gambling statutes which involve the ones related to internet sweepstakes and fish games,” he said. “And then at that point, anybody who operates an illegal gambling establishment would face criminal prosecution.”

North Carolina General Statute 14-306.4 prohibits “electronic machines and devices for sweepstakes.” Depending on the person’s criminal record, violators could face a Class 1 misdemeanor for a first offense or a felony for second or third offenses if they are running a sweepstake cafe.

Inside Dollar Doz-It in Burlington, owner Rodney Medley hangs a sign on his wall outlining the compliance of his cafe with the statute, arguing that his games are “skill-building.” Medley’s sweepstake model has patrons pay for internet time, in order to play games for the chance to win a cash prize. He claims one specific game – which his cafe doesn’t have – is what brings in the crime.

“The main concern is really these places that got Fish Tables,” Medley said. “That’s what’s bringing in the crime because they take in a lot of money and they pay out a lot of money. Criminals know that.”

According to the rules of Ocean King, a fish table game, players go head-to-head in a race against each other to catch as many fish as possible. To play, patrons pay into a cash slot to buy credits. You use credits to buy ammunition and shoot at fish with ranging point values. Every time you catch a fish, its point value is added to your credit, making it easy to rack up a lot of points — and in turn a lot of money.

Dollar Doz-It doesn’t have fish tables, and Medley says he’s never had to call the police to his business.

“I don’t have fish tables, and I don’t get that type of customers come in here,” Medley said. “They know we don’t have them, and they get on out of here. [The police] have to punish the ones with the fish tables and leave other people alone who don’t have tables. My store ain’t bothering nobody.”

Medley’s cafe is down the street from three retirement homes. The majority of his customers are in the older age range.

“They come here and they enjoy it,” Medley said. “You can’t tell somebody how to spend their money. All this is going to do is send our customers farther away.”

Though the police department is cracking down on the owners, Balog said they’re not out go get citizens — at least for now.

“We don’t have any initial intention to go arrest these people that go to the sweepstakes,” Balog said. “Our objective is really to improve public safety, not to write somebody a ticket for using a gambling machine.”

Balog and his department are committed to closing down sweepstakes. Their crackdown was inspired by the Greensboro Police Department, where there are currently no known operating cafes.

“We know that sweepstakes are attracting violent crime,” Balog said. “Our intention is to deal with the folks who are providing or operating the gaming establishments.”

Medley considers himself a local business owner. He’s been in and out of the sweepstakes business for about 16 years and helped build Dollar Doz-It from the ground up.

“When I opened this business, I didn’t open it with illegal gambling money,” Medley said. “I opened it with my hard-earned money that I actually saved and bought the place with.”

He believes the police crackdown is merely a scare tactic. In time, Medley knows businesses will reopen again.

“It’s like planting a garden every year,” Medley said. “You know what’s gonna happen in the spring, someone’s going to go plant a garden and it’s gonna open up and grow. That’s what these sweepstakes are — shut them down, they go dormant and then boom it pops open again. And they run as long as they can until the law shuts them down again.”

Medley plans on closing Dollar Doz-It’s doors at midnight on Oct. 15. As for his plans for after closing his business, he doesn’t know.

“I reckon they’ll tell me something else to do,” Medley said. “I’ll hold off and shit.”

But for the next 12 days, he’ll keep doing his job.

All records of criminal activity were obtained from the Alamance County Courthouse.