Kam Terry: Not your average outside hitter

Senior outside hitter Kam Terry rises into the record books 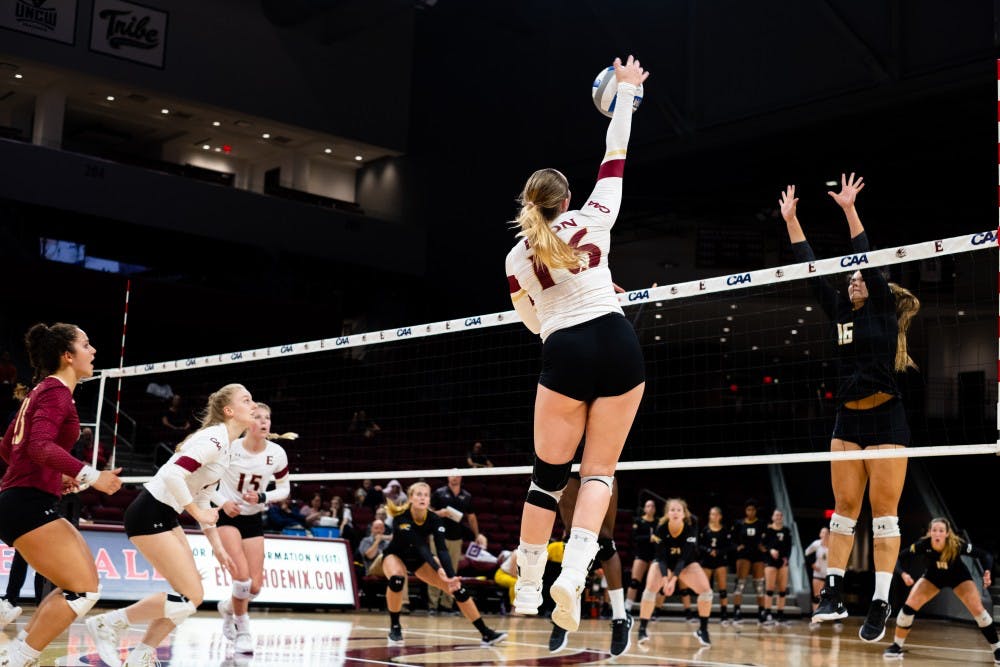 Kam Terry is nothing short of a handy-woman. She can do it all, she succeeds at all.

Terry is a senior outside hitter for the Elon University volleyball team but should not be restricted to her title.

Despite fighting her “average” height through the college recruiting process, it was easy for Elon’s head volleyball coach Mary Tendler to see the versatility and potential Terry possessed. Having progressed as a player over her four years at Elon, Coach Tendler understands the importance of Terry’s stamina and positional flexibility.

“She likes the role of being that player that needs to be on all the time and lead the team, and she obviously does a lot for us,” Tendler said. “She’s getting a lot of kills and digging balls and passing, she has to pass a lot of balls being serve-receive on almost every rotation.”

Being on the court for nearly every point will surely bring some big numbers to the stats sheet. Terry has been no stranger to racking up huge box scores. In her career, she has totaled 1,223 kills thus far, ranking her No. 7 all-time in Elon history, and she’s not even
done yet.

Terry plays almost every point of every set of every match. Her constant presence on the court has allowed her fellow teammates to count on her and understand how she plays.

Terry’s leadership and ability on the court have given her not only incredible success but also a bond with her teammates, which is conveyed through the progress of the team throughout the season.

When asked about her individual success, Terry was quick to give credit to her teammates.

“As a hitter, I rely a lot on my team, so it’s been really helpful having Maddie [Jaudon] back there as our libero, making sure we get some good passes, and obviously Kodi [Garcia] coming in last year was also a huge help, having a really key setter,”
Terry said.

Unfortunately, in Terry’s time at Elon, the athletic program has moved into the Colonial Athletic Association (CAA) and provided some much stronger competition. Adapting to this elevated competition has been difficult as Terry’s team has yet to record a single win in conference
play.

Despite some conference woes in the past, Terry believes the league is “really great because on any given day, you can take any team, it really depends on how you play.”

Terry’s name continues to rise in Elon record books as her career continues. She notched a 32-kill game this season against Georgia Southern University, placing her name at No. 2 for most single-game kills, one behind Velma Degree in 1993. Her name may not be etched into a plaque upon her departure from the Elon campus, but her legacy and influence will continue to impact all the younger players on this year’s team.

“[Terry]’s a good mentor for [the younger players], and she’s in a position where we have first-year players, … so they get to watch her and see what she’s doing,” Tendler said.

Leah Daniel and Kellyn Trowse, both freshman hitters for the Elon volleyball team, are the two players who are expected to learn the most from Terry, playing the same positions and watching her from the bench as well, giving them an additional perspective.

Terry also loves seeing young players gain experience just like she did when she came in.

“It’s especially exciting for future years because when you have freshmen that get to play right away, you know, they get that experience right off,” Tendler said. “As we are getting into conference and they are seeing that level of competition it takes to compete in this league, they are getting better too, which is good to see.”

The combination of Terry’s success and leadership have given her a chance to leave a long-lasting mark on the Elon volleyball program. Her presence on the court has given fans lots to cheer for over the years, and for Terry, “It’s just been an awesome experience
so far.”