The gridiron floor: Fantasy football brings a floor together 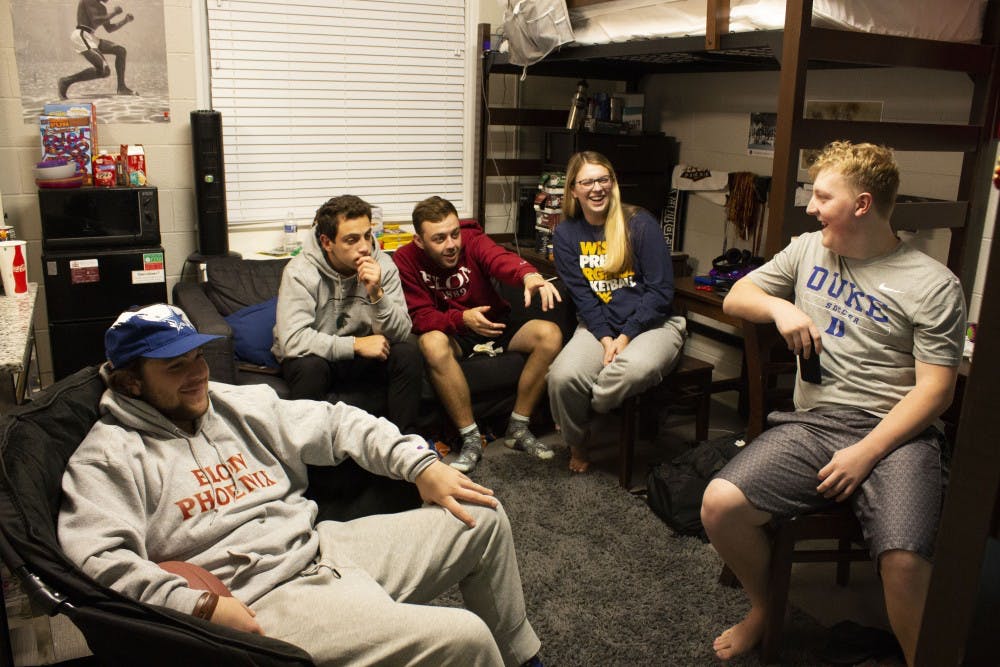 Aside from class and extracurricular activities, the students living on the second floor of Sloan Residence Hall, the site of the Sports Management Living and Learning Community, have found a way to mix friendship with football.

The centerpiece of the wall on the second-floor hallway is a poster with the names of 12 fantasy football teams that residents put together in friendly competition. The league name: “Sloaners.” Residents donning sports apparel and casually conversing about the latest in the world of sports is common on the floor.

These students saw a fun opportunity to get to know each other through a common interest in football.

The league’s commissioner, freshman Michael Faccibene, said their fantasy football journey started in Buffalo Wild Wings. At the restaurant, Faccibene and other residents held their fantasy draft prior to the start of week one of the National Football League’s 2018-2019 season.

For Faccibene, fantasy sports have led him to develop life-long friends in his home, Manhattan, New York. With that in mind, he thought it would be a “good idea to bring to college.”

“At home, me and my good friends had a fantasy league that we paid attention to, and it brought us closer together,” Faccibene said.

Fortunately for Faccibene, that same sentiment has been felt by others participating in the league at Elon University. Fellow freshman and league member Evan Huddleston shares a similar love for fantasy football.

Huddleston has been participating in fantasy football leagues since the sixth grade and has felt the league at Elon has been a great way to get to know people on his floor. It also made for some good trash-talk.

“I know everyone on the floor now because I told them their team sucks,” Huddleston said.

The members of the league are not the only ones who are glad to see that this has brought them closer together.

Enjoying all the bonding around football on his floor is sophomore resident assistant Jack Taylor. He is glad to see that his residents “took initiative” by starting this league, especially since they are all “new to the Elon experience.”

“What I love about the fantasy league is the sense of community that is built,” Taylor said.

Another way residents socialize through this league is by watching their players on television. Faccibene said their schedules might not always align, but on game days, some of the league members will try to get together and watch games.

And while fantasy football can be a great social activity for the Sports Management LLC, this league can also be a way for them to earn money. According to Faccibene, each member of the league contributed $15, and the winner of the league will receive the sum of all the members’ contributions.

The prize of winning is cash, but the cost of losing may be a cold swim. According to Huddleston, after the end of fantasy football season on Dec. 30, the loser will have to “jump in a fountain.” But Faccibene said this was “still up for debate.”