Elon football stumbles to No. 11 in the nation 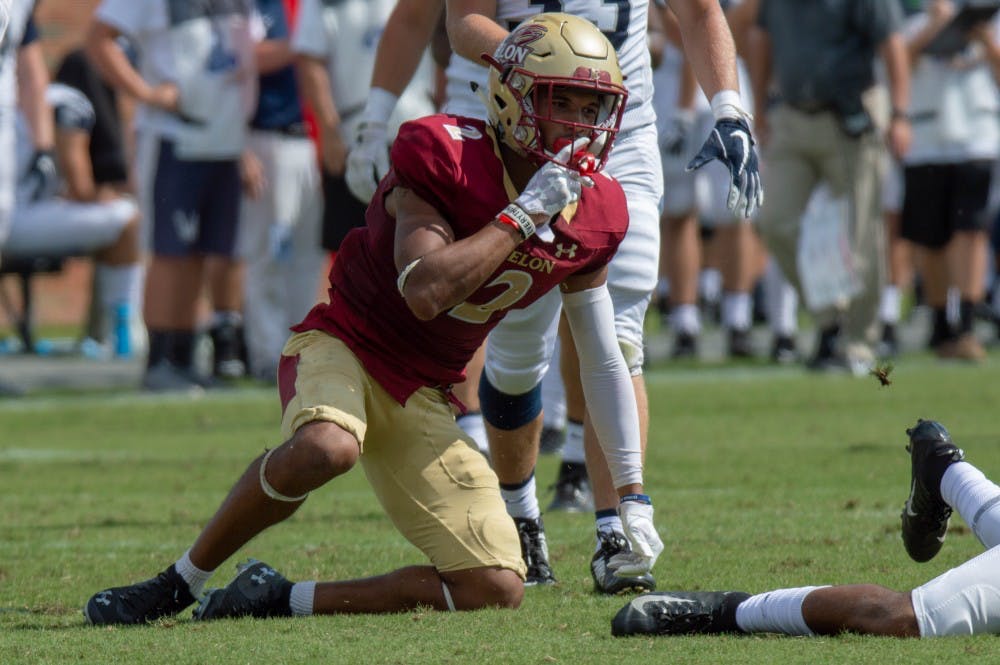 
Sophomore wide receiver Kortez Weeks celebrates after converting a third down to keep the Phoenix drive alive on Sept. 29 against the University of New Hampshire.

Elon’s biggest test for the remainder of the season will be dealing with injuries. Sophomore starting quarterback Davis Cheek went down in the middle of the first quarter against the Blue Hens with an apparent left-knee injury. Head coach Curt Cignetti said in the postgame interview that the early signs did not look great for Cheek. Elon Athletics said more information will be released later in the week.

Senior running back Malcolm Summers warmed up with the team before the game and was dressed in the first half, but he never saw the field. The Colonial Athletic Assocation's leading running back came out for the second half in street clothes, signaling that he would not play in the game. Summers apparently re-injured the same hamstring that sidelined him last year. Problems resurfaced for Summers at some point during the team’s win against James Madison University on Oct. 6.

Junior defensive back Greg Liggs Jr. took an apparent hit to the head at the end of the first quarter making a diving tackle for loss on Delaware running back Vinny Papale. Liggs Jr. came out and was sidelined for the entirety of the second quarter before returning after halftime. He was properly cleared by the training staff and returned to action, but it is unclear if lingering effects of the hit will appear.

The CAA remains strong with seven teams ranked in the nation. James Madison University reclaimed its spot as the highest ranked team in the CAA at No. 5. Towson (No. 14), Stony Brook (No. 17), Maine (No. 20), Rhode Island (No. 23) and Delaware (No. 25) are all also ranked in the Coaches Poll. Elon is slated to play Towson, Rhode Island, and Maine to end the season.

Elon’s next game is on Saturday, Oct. 20, against the University of Richmond Spiders (3-4, 1-3) during Inauguration Weekend.