Cleaning up Michael’s mess on campus

Crews focus on damage from the hurricane’s heavy wind, rain prior to students’ return from Fall Break 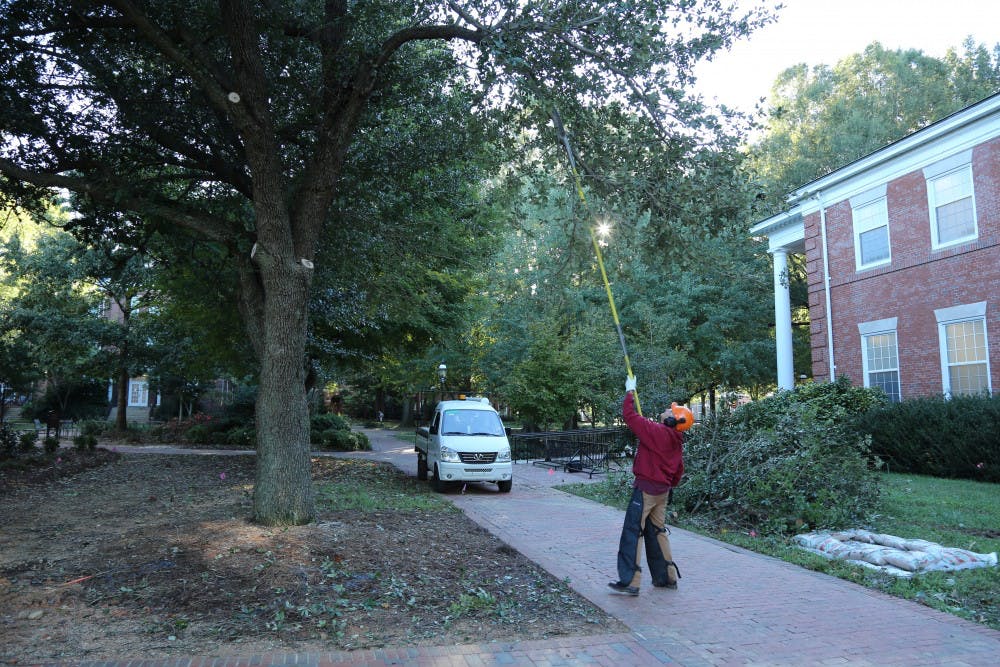 Photo by Anton L. Delgado | Elon News Network
Arborist Wendy Williams uses an extended saw to cut down the damaged branches of a tree by McEwen Dining Hall during the aftermath of Hurricane Michael on Friday, Oct. 12.

Updated at 2:30 p.m. on Oct. 13, 2018 to include more information regarding Elon University's recovery from Hurricane Michael.

Wendy Williams’ first rays of sunshine Friday morning were through the damaged branches of an oak tree. She was donning soundproof earmuffs — Wendy doesn’t like the sound of branches hitting the ground — but thankfully her phone was on vibrate.

As the only arborist at Elon University during Hurricane Michael, her phone had regularly been alerting her to damage around campus over the past 24 hours. But this time, it buzzed for breakfast.

Wendy met with the other 22 members of Physical Plant’s Landscaping and Grounds crew Friday morning at Lakeside Dining Hall, where she listened to her supervisor’s hopes for the weekend.

“Our goal is get campus cleaned up of debris by the end of the day,” said Scott Stevens, director of Landscaping and Grounds. “If we can get campus clean, there is no reason to come in tomorrow.”

After working a 13-hour shift on Thursday and beginning work at 6 a.m. Friday, the thought of not having to come in and instead spending the weekend with her daughter motivated Wendy.

She set off from Lakeside to take care of a downed tree — business as usual.

Now almost halfway through her 26th year at Elon, nothing really surprises her, especially not hurricanes.

“I’ve seen all sorts of storms before,” Wendy said. “I was mentally ready to deal with whatever was to come.”

In comparison to the other natural disasters Elon has faced since Wendy started in 1993, Michael comes up as the fourth worst in her eyes in terms of damages — ranking behind Hurricane Fran in 1996, severe thunderstorms in 2000 and an ice storm in 2014.

Most recently, Wendy helped the campus following Hurricane Florence in mid-September. The storm canceled three days of classes, but its effects were far less severe than original estimates.

“I don’t even remember Florence other than it rained a little,” Wendy said. “Michael has been far worse for us.”

Wendy has been driving around assessing, cutting and clearing many of the fallen and damaged trees on campus. For her, it is the most heart-wrenching part of the job.

“Cutting down branches and slicing up trees is painful for me because I just love trees and nature,” Wendy said. “But I’ve done it long enough that to me, a dead tree is just a new opportunity to plant something else.”

While scouring the campus for downed trees, Wendy and her colleague Terry Rogers, a gardener at Elon, came across a Chinese elm behind Brannock Residence Hall. With a chainsaw and gloves, the duo began chopping up and piling the branches of the same tree they had both helped plant more than a decade prior.

She has only ever had two jobs. The first was with the Danieley Nursery, where she was a horticulturist and grew shrubs. The nursery was run by Mark S. Danieley, the son of late Elon President Emeritus James E. Danieley.

Wendy faced her first storm, Hurricane Hugo, with Mark in 1989.

“Working hurricanes is always kind of exciting and kind of stressful. It was then, and it still is now,” Wendy said. “Just now we have to do it before all of the students get back.”

After the nursery, Wendy moved to Physical Plant in 1993. At that time, James Danieley was still teaching chemistry.

Twelve years later, she received her arborist certification from the International Society of Arboriculture. As Wendy’s career at Elon grew, so did other aspects of her life.

In 2001, Wendy named her only child Summer — despite her favorite season being spring.

Summer is now a senior in high school and is planning to apply early decision to Elon — the school her mother has been caring for since before she was born.

"I applied here because it's home and because I'll get to see her every day," Summer said.

But the damage Michael has caused on campus has been keeping Wendy from spending time with her daughter and helping with the college process.

The bulk of the damage done to Elon’s trees was a result of a combination of heavy rains and harsh winds. According to the National Weather Service, Michael poured 2.5 inches of rain onto Alamance County and had wind gusts up to 56 mph.

The rains dampened the soil at the bases of trees, making them more prone to being knocked over by the wind. According to Physical Plant, there are about 17 downed trees and roughly 40 damaged trees around campus.

Physical Plant is working to clear all the debris by the end of Fall Break so they can turn their attention to preparing for Connie Book's inauguration as the ninth president of Elon University on Oct. 18.

Even though Wendy's gut tells her she'll be cleaning up Michael's mess until the end of next week, that feeling hasn't stopped her from going the extra mile.

While Physical Plant made it clear there was no obligation to work on Saturday, Wendy, along with five others, volunteered to come back to campus and continue the recovery effort. But this time Wendy didn't have to miss spending time with her daughter.

Instead of staying at home, Summer spent Saturday with her mom by also volunteering to help clean up campus.

"One of my earliest memories is coming to campus to work and spread grass seeds around," Summer said. "So, I figured why not work today."

Despite all the damage and work to be done, Elon's campus has virtually gone back to normal, with admissions tours ensuing Friday morning. According to Greg Zaiser, vice president for enrollment, around 200 families toured Elon's storm-battered campus over Fall Break.

The Burlington Fire Department responded to roughly 45 emergency calls while the Elon Fire Department responded to more than 50 calls throughout Thursday and Friday. Most calls were in regards to downed trees and power lines. Both fire departments noted no injuries. Elon's Student Health Services have maintained their Fall Break hours, but has had zero patients come in with Michael-related injuries.

At its peak, Duke Energy reported 24,959 power outages in Alamance County and nearly 90,000 outages in neighboring Guilford County. As of Saturday, power is still out at the Station at Mill Point and South Campus. According to an email from Jon Dooley, vice president for Student Life, Duke Energy "has not yet provided guidance on when power to those facilities will be back on."

On their current outages website, Duke Energy estimates that power in Alamance County should be fully restored by 11:45 p.m. on Tuesday, Oct. 16. As of Saturday afternoon, 14,293 residents in Alamance County are still without power — more than 10,500 residents have had their power restored since the peak of the storm on Thursday.

According to Mill Point staff, there are roughly 55 students currently staying in the powerless residential area. All students on campus without power have been invited to spend their days and nights in Moseley Campus Center — an invitation several students have taken up.

"Any time we have a wide spread power outage, Moseley is our main center. Moseley is actually on a generator, so in the event other parts of campus went down, we would be able to shelter folks here," said Jana Lynn Patterson, associate vice president for Student Life and dean of Student Health and Wellness. "As long as we got a residential area where folks can't access power, then we will keep the shelter open."