Biko Mandela Gray: "On Not Standing a Chance: Black Life & the Object" 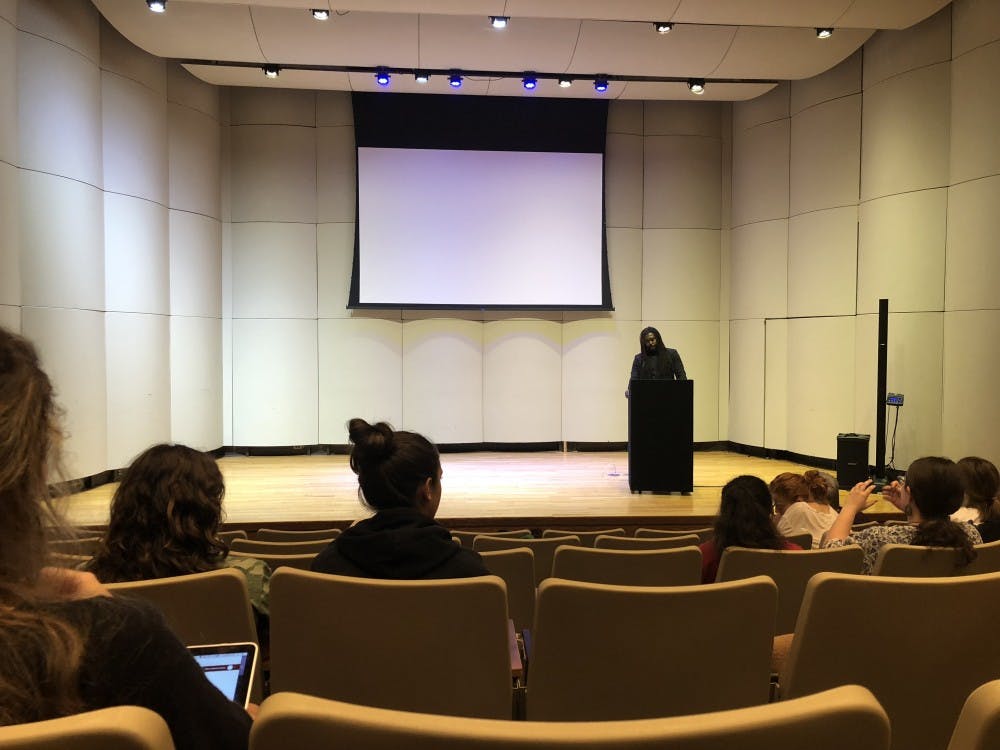 Biko Mandela Gray, current assistant professor in the department of religion at Syracuse University, spoke to Elon students Thursday night in Yeager Recital Hall about the connection between black life and the object.

“We do not see people when we see blackness, we see objects, we only see property,” Gray said.

Gray opened the lecture by explaining how he can’t live, can’t breath and can’t think, as a black body. He can’t do anything without interruptions, some of which are potentially lethal. Gray explained that this type of living is essentially the life of the object and the primary characteristic of the object is powerlessness.

Gray then expanded on this idea of powerlessness by recalling the Tamir Rice case of 2014, where a 12 year old boy from Cleveland, Ohio was shot by a white police officer for playing with a toy gun.

“Tamir was dead within two seconds. He never had the opportunity to present his case. He was dead on arrival. He was a 12 year old boy who never stood a chance. All the officers saw were his physical properties and felt threatened the moment they encountered them,” Gray said.

Gray also explained how the object holds the possibility of significance, even if significance is denied. For example, ideas can only be things, but ideas, thought and reason erupt because of their encounter with those things.

“Black people and black lives as objects matter, even if the world does not acknowledge that they do,” Gray said.

When concluding his lecture, Gray drew connections to the Brett Kavanaugh case, explaining how Dr. Ford was treated like an object and reduced to her physical properties. With this, Dr. Ford herself did not stand a chance.

“I really want students to see black males as scholars. Most speakers here are white men, but the only difference about Biko is that he’s black. I want them to realize this and see Biko for his intelligence. I hope his message is received in the spirit of education and communication and I’m just really grateful that he’s here,” Johnson said.

Inspired by George Yancy, the 2016 Reynolds speaker and one of his former teachers, Johnson started his own research regarding the black body being the problem whereas the white body is the blemish. Johnson realized that blackness is a problem because whiteness makes it one. Gray and Johnson are currently writing a book together that addresses these types of ideas.

Gray will be returning to Elon University on Nov 30th, not only to work on his book with Johnson, but to also be a part of a master class with Elon’s African study program.