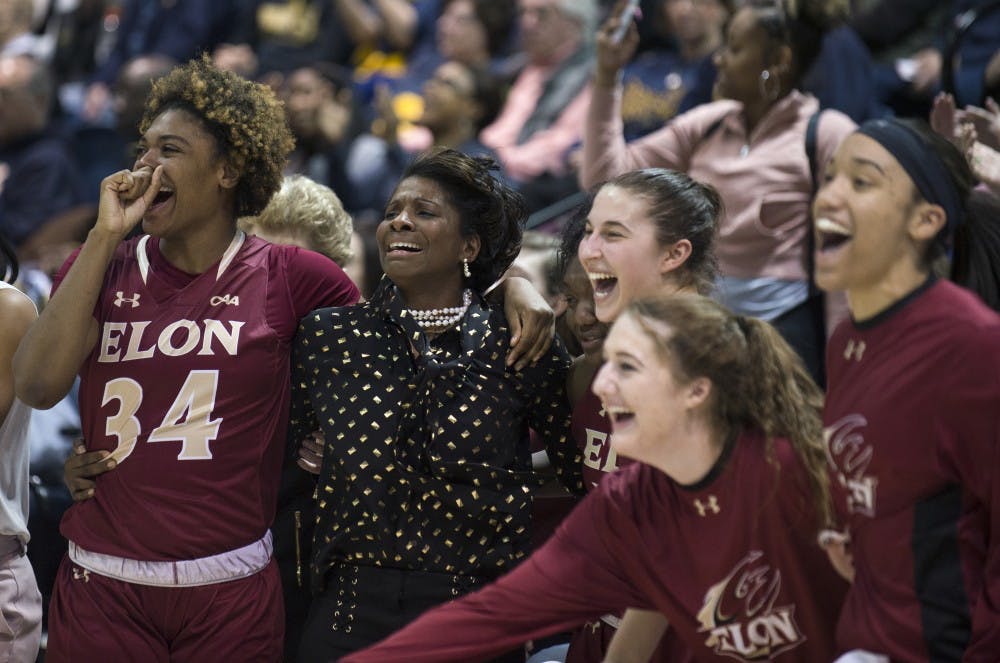 
Elon cheers on the sideline as the final seconds of the game tick down March 10, making Elon the CAA champions.

On Sept. 25 the Elon women’s basketball team announced its full 2018-2019 schedule. The season will be punctuated by a big name home-opener in the brand new 5,100-seat Schar Center. Eighth-year head coach Charlotte Smith will get to face her alma mater, the University of North Carolina at Chapel Hill, Nov. 6. Smith hit the game-winning shot in the 1994 championship game to give the Tar Heels their first - and only - national title. Her number is one of two in the women’s basketball program that has been retired by the school.

Just two weeks later on Nov. 18, the team will travel to Duke University to take on the Blue Devils. The team will be staying close to home in their non-conference portion of the schedule. The Phoenix will only leave the state twice, traveling to bordering states Virginia and South Carolina in back-to-back games.

Elon will look to continue its recent domination of the conference for a third year in a row. The past two years, Elon has gone a staggering 30-6 in the Colonial Athletic Association (CAA), including going undefeated at home last year. Elon will finish its regular season schedule with five of seven games in the Schar Center.

The road to the University Delaware and the CAA Championships begins on Jan. 4 when Elon gets its first conference test of the year against the Huskies of Northeastern University. On Feb. 1, Elon will face off with the Drexel Dragons in a rematch of last year’s CAA title game. The quest for a conference three-peat starts on Oct. 27 when the Phoenix host Belmont Abbey in an exhibition.