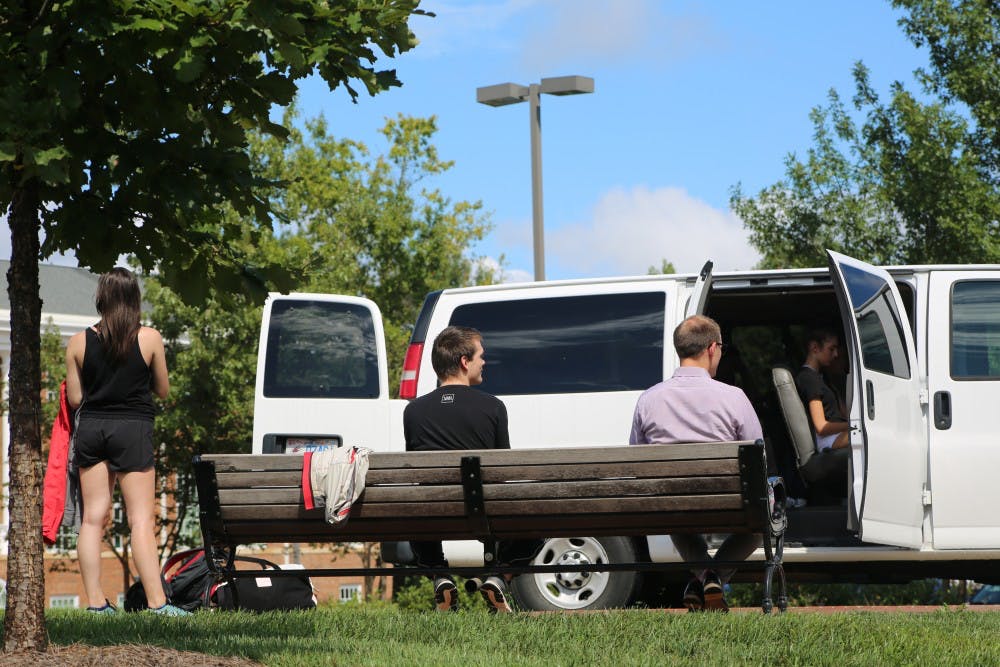 Students lugged duffel bags and suitcases through the muggy morning air Thursday, joining the thousands who heeded a request to evacuate campus ahead of Hurricane Florence’s arrival.

It all started with an email on Tuesday morning. Vice President for Student Life Jon Dooley “strongly encouraged” students to leave campus before the storm after detailing the destructive potential of the winds and rain.

“When he sent that I knew it was a little bit more serious than I was like giving it credit for,” said senior Colton Cadarette. “So that was what motivated me to say, ‘OK, I need to make a plan and do something.’”

According to Dooley, approximately 1,400 students indicated that they were staying on campus, but specific numbers of those who departed were not made available.

In an interview with Elon News Network, Dooley explained the logic behind urging students to get off of campus.

“We wanted to encourage students who were able to leave the area to do so, so that we would have the capacity to care for the students who wouldn’t be able to leave the campus,” Dooley said. “So the wording there on ‘strongly encouraged’ was really to help people realize that this isn’t just a snow day or a hurricane party moment, but that this is a serious storm coming our way.”

There were plenty of the usual suspects in students’ hurricane evacuation destinations. Suburbs and cities up and down the eastern seaboard were among the more popular spots that departing students were seeking refuge.

But sophomore Irisgzel Cheong headed for the other coast. She’s riding out the storm in Los Angeles, visiting friends, since going home to China wasn’t an option.

“I grew up in China and we never had these types of warnings or had to deal with this type of situation in the slightest,” Cheong said. “And I think all the uncertainty and how so many people were not sure what to do, it really was stressing me out.”

That stress led her to buy a plane ticket and fly out west. After a hectic morning of contacting her parents and researching flights, she had plans set in stone only three hours after the Dooley email.

Even under the storm-free sunshine of Southern California, her mind is on those who stayed behind.

“It's kind of like a mini vacation, but it's so sad,” she said. “I woke up this morning and checked the news and started crying because I'm scared for everybody else who is still there.”

While some students expressed concern about the possible effects of Florence, others thought the panic was unnecessary.

“It’s just a little bit of rain,” said sophomore Flo Kunz. “I’m not made of sugar.”

Kunz is making his way west, going home to Knoxville, Tennessee, in a carpool with friends. He called the email from Dooley “overhyped.”

Other members of the Elon diaspora echoed that sentiment, saying that they were less worried about the rain and more eager to seize an opportunity of to go home and unwind. The university canceled classes for Thursday and Friday in anticipation of harsh conditions.

“I was excited to have a little break from classes,” said freshman Lila Cohen, who is flying home to New York City. “As much as I like classes, I was ready to get to sleep for four days.”

When Dooley nudged students to leave campus, it came with a caveat. The Tuesday email explained that students trying to evade the storm should do so no later than Wednesday evening. With such short notice, evacuees were scrambling to put together travel plans.

To help the scores of students catching flights home, the university offered a shuttle service to local airports. According to the Moseley front desk, 355 students signed up for the service.

Although some trekked far and wide of the oncoming tempest, others had travel plans that may bring them closer to the wind and rain. Freshman Kristen Nguyen has a relatively short trip home, just two hours down the road to Charlotte.

She said she was beckoned home by her parents, who were alarmed by the orders for evacuations at public universities around the state. She added that the slew of departures felt appropriate giving the coming weather, but said thought it was “ridiculous” that some of her peers were shelling out hundreds of dollars to fly home on a day’s notice.