Elon's 128th Commencement Day through the eyes of a 2018 graduate

Barang Phuk graduated alongside her classmates on May 19, but her journey to the stage in Alumni Gym was a little different. 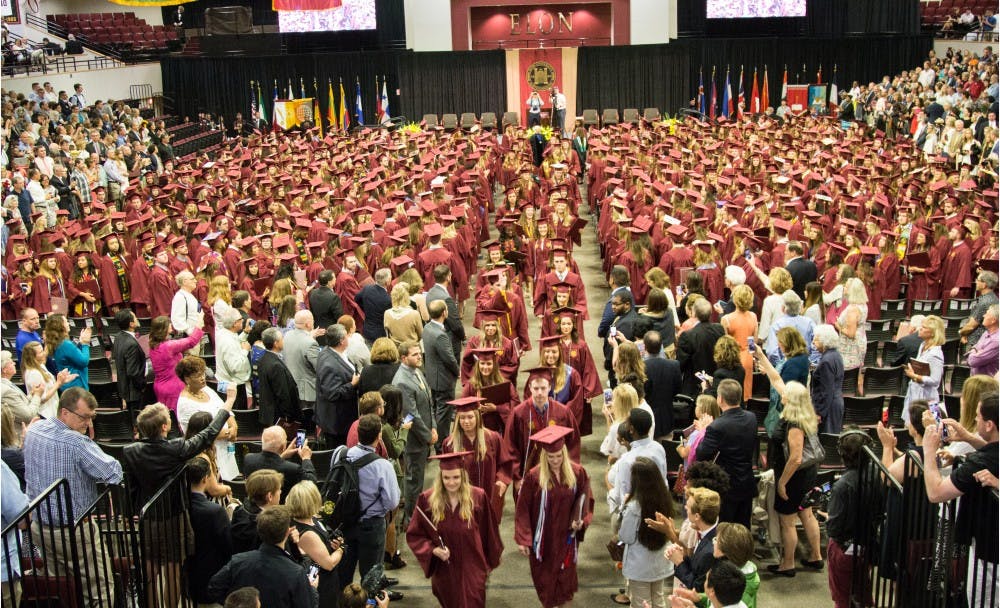 Now alumni, the first graduates from the Class of 2018 file out of Alumni Gym following the end of Elon's first 128th Commencement, May 19.

“The weather on my first day at Elon was like winter in Cambodia,” Phuk said. “Everyone that saw me looked at me like I was crazy.”

But the boots she was wearing as she moved in were better equipped for her last day at Elon University.

Phuk is a member of the Class of 2018 and graduated in a two-part commencement ceremony hosted in Alumni Gym on May 19. She was alongside 1,400 of her classmates — the largest graduating class in the university's history.

The announcement that the ceremony would be moved indoors was made the night before graduation, following weather forecasts that indicated sporadic rain showers throughout the day. This was the first time commencement has been hosted indoors since 1998.

Before the 9:15 a.m. start to commencement, the graduates assembled in Jordan Gym — where Senior Class President Bob Minton announced that as a class they had raised $14,313 for Elon.

After the announcement and the presentation of a symbolic check to President Connie Book, the graduates prepared to walk into Alumni Gym.

Phuk, a double major in political science and international business, took part in the first morning ceremony for all graduates receiving a Bachelor of Arts degree.

The ceremonies' keynote address was given by President Emeritus Leo Lambert, who was introduced by President Book and welcomed onstage with a standing ovation from the Class of 2018.

Lambert’s 15-minute address touched on a variety of topics, including his purpose as the commencement speaker.

“The task of a commencement speaker is essentially to address a two-word big question. What matters? Sometimes we discover what really matters in life, in lightning bolt moments. Like when you fall deeply in love or become a parent,” Lambert said. “But sometimes, what matters to us most is re-revealed to us during the most difficulty of times … But within those dark hours suddenly may appear a moment of light or grace or truth, which illuminates and helps us find our path again.”

One of those illuminating moments for Lambert was last Jan. 6 during a service celebrating the life of Harrison Durant, a student in the Class of 2018 who committed suicide on Dec. 8, 2017.

At the service, Lambert heard the song “Blue Boat Home” by Peter Mayer. Hearing the “ship companions” lyric within the song is what Lambert considers to be the moment of light that made him realize what mattered most.

“What matters most is the compassion we can show to each other every day. Think about all of those good people that have to summon their bravery just to go to the grocery store. A muslim woman in a hijab, or a transgendered person, or a person who suffers from debilitating anxiety,” Lambert said. “What if your generation leads in ensuring the condemnation and misunderstanding these shipmates experience all too often would be replaced with support and respect. What a profoundly different world we would inhabit.”

A goal Lambert hopes the Class of 2018 and all Elon alumni will help achieve.

To end his speech, Lambert referred to his “Bologna Sandwich” metaphor, which was a famous part of the president emeritus’ previous New Student Convocation addresses.

As Lambert returned to his seat and the Class of 2018 prepared to walk onstage to receive their diplomas, Phuk took what he had said to heart.

"I liked Dr. Lambert's speech because I can relate to the things," Phuk said. "He challenged us to challenge ourselves, and I strongly agree that we can do anything we set our minds to."

A mentality Phuk believes is important for her to have as she prepares for the next stage of her life. Her future after Elon will first take her to Stanford University, where she will be a yearlong intern at a Human Rights Clinic.

During this year in California, Phuk will also be taking time to study for the Law School Admission Test (LSAT). She plans to apply to law schools around the U.S. in hopes of being admitted by fall 2019.

“My long-term goal is to go back to Cambodia to work as a human rights lawyer,” Phuk said. “But I also want to create a human rights NGO that creates safe houses for children to go to school.”

According to Phuk, one of the largest problems facing Cambodian youth is access to education because of the distance some children need to travel to get to school.

“If I can build safe houses for them to go to school, it might make a difference,” Phuk said. “And if I can’t change the whole country, then I can change this one specific thing.”

As Phuk walked onstage to receive her two diplomas and take her first steps to an even higher education, she was joined by her parents 9,000 miles away in Cambodia.

While none of her family was able to attend the graduation in person, they were able to be part of Phuk’s special moment through the Elon Live Stream, which made the commencement available worldwide.

“It is sad they couldn't come because it is a big accomplishment and I want them to come and celebrate with me,” Phuk said. “But at least they can celebrate the moment with me even though it’s not in person.”

The accomplishments Phuk had at Elon include being inducted into seven honor societies, being awarded with three scholarships and being accepted as an Odyssey Scholar.

Her accomplishments led to a continued relationship between her private high school in Cambodia, The Jay Pritzker Academy, and Elon.

Phuk was the first Cambodian student admitted to Elon, and because of her success, her high school has had students apply to the Odyssey Program every year.

There is now at least one Cambodian student in every grade at Elon.

"Barang is the best model that I could have ever asked for," said Sopheap Luon, a rising senior and Odyssey scholar from Cambodia. "She is the first student from Cambodia admitted to Elon, and she opened new possibilities for us."

After receiving their undergraduate educations at Elon, Phuk hopes in the future she will be able to work with her fellow Cambodian scholars to improve their home country.

After receiving her diploma, Phuk exited Alumni Gym and was greeted by Karen Pritzker, the founder of the academy, and Michele Tayler, the academy’s chief operating officer.

For Phuk, it was like having her own family at the graduation.

“They are like my guardians,” Phuk said. “Although they are not my parents, it is almost equal.”

As many of her classmates crowded around tables outside of Alumni Gym to receive their oak saplings, Phuk left the crowd already knowing where her sapling would be taking root.

This tradition is hosted so international students would not need to go through the process of transporting their oak saplings to their home countries.

Phuk left the gym arm-in-arm with fellow Cambodian scholars and headed toward the Global Neighborhood parking lot, where a car filled with all of her belongings was ready to take her to her flight to California.

As she drove away from Elon, Phuk left nothing behind but a Cambodian scholar tradition, lifelong memories and a growing oak sapling.