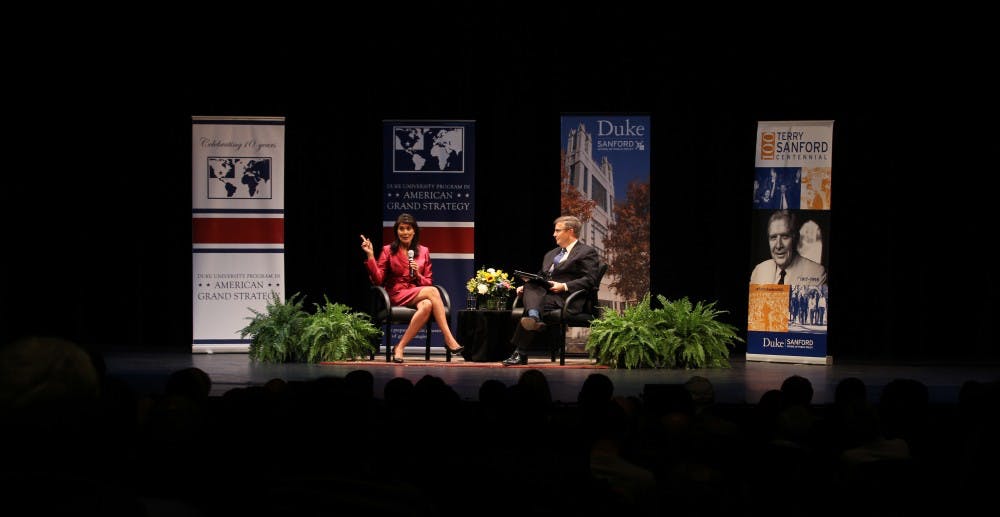 
Nikki Haley, U.S. ambassador to the U.N., answers a question posed by Peter Feaver, professor of political science and policy studies, during Haley’s lecture at Duke University on April 5, 2018.

DURHAM  — Shouts of “please run for president” echoed around Page Auditorium as Nikki Haley stepped down from the stage to pose for photos and sign autographs with eager students.

Haley, the current U.S. ambassador to the U.N., gave the Terry Sanford Distinguished Lecture at Duke University, Thursday. Her lecture titled, “Confronting Today’s Global Governance Challenges,” was followed by a moderated conversation with Peter Feaver, a professor of political science.

As a former governor of South Carolina, Haley expressed how great it was to be in her “sister state.” Her lecture covered the journey Haley took from the classrooms of Clemson University to the floor of the U.N. Headquarters in New York.

Haley focused on how America had to continue to “stand up” for its values, despite international pressure.

“In America, we do not celebrate the mob,” Haley said. “We celebrate the person who has the conviction to stand up against the mob.”

This specific statement directly referenced Israel, a country which Haley plans to continue to stand with.

Especially following President Trump’s controversial decision made in February to recognize Jerusalem as the capital of Israel.

Haley said Israel has been treated unfairly within the U.N. Her statement “Israel is our great friend,” was followed swiftly by a round of applause from the audience.

Throughout the speech, Haley covered a wide variety of pressing controversial issues. The ongoing trade war with China, President Trump’s upcoming talks with Kim Jong-un, supreme leader of North Korea, Iran’s race for nuclear advancement, the defeat of ISIS’ caliphate and Russia’s involvement in the 2016 election dominated the speech.

Haley believes her responsibility is to voice America’s values to the global community.

“My position makes me an international voice for American values,” Haley said. “Standing alone on behalf of America’s interests is not something to be embarrassed by.”

Haley believes Trump appointed her as ambassador because of her unwavering beliefs.

According to Haley, during the meeting she had with the president prior to her appointment, she told him she refused to be “a wallflower or a talking head.” Which is the exact reason he replied, “that’s why I want you.”

As the ambassador, Haley has realized the most important topic is for political polarization to cease.

“We are focused on our differences, rather than what brings us together. We are increasingly prone to calling those who disagree with us, not just as wrong, but as evil,” Haley said. “Instead of trying to understand our political opponents, we too often write them off as not even fit to have a conversation with.”

This is a development in U.S. society Haley believes will continue to push a wedge between the two main political parties.

Rahul Krishnaswamy, a freshman at Duke who is also a democrat, considers himself politically opposed to Haley.

But he still took her message to heart.

“The overarching factor that really made me want to come was the fact that Ambassador Haley is the first Indian-American to reach such a prominent office,” Krishnaswamy said. “As an Indian-American, regardless of my political affiliations, it is a proud moment.”

Whether the students in her audience held views like Krishnaswamy's or leaned more conservative, Haley made it clear that each one of them needed to strive to make their country and fellow citizens proud.

“I say this to a lot of the students out there: if you are just good at today, if you try to make today better than yesterday, let things fall willingly,” Haley said. “Let God do his thing, and don’t worry about it. That’s what I do everyday. My hope is that I make the American people proud, and if I do that, I’m not worried about anything else.”

With those last words, Haley stepped off-stage to begin signing photographs and posing for pictures with a crowd eager to meet her.

Surrounded by agents from the Bureau of Diplomatic Security, Haley greeted supporters and fans with a warm smile. She told every student who posed with her for a photo or requested an autograph, “we need you. Keep fighting.”