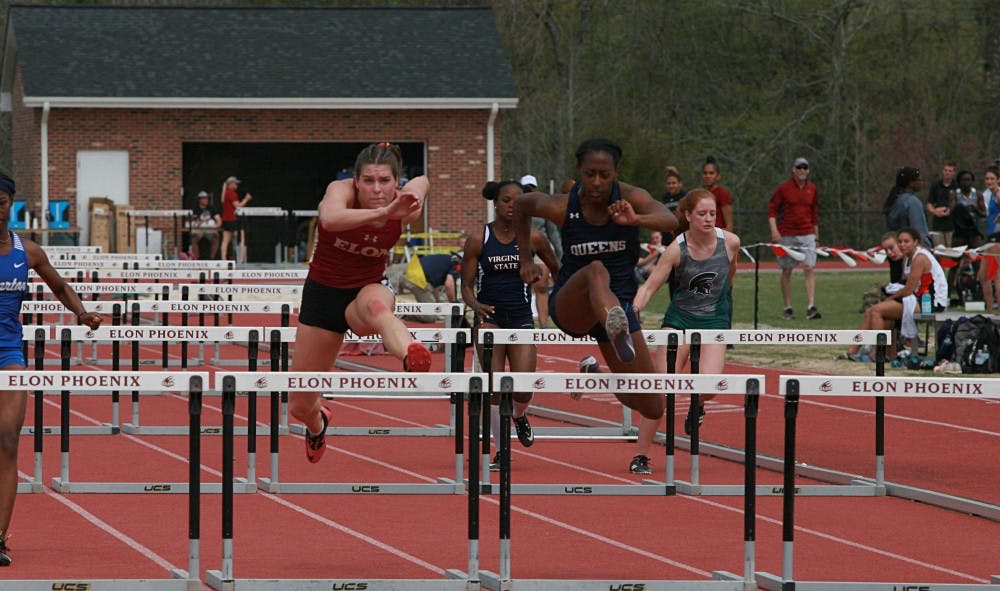 Looking back at the season so far, the women’s track and field team has succeeded in many endeavors, and has many noteworthy competitors that embody what it means to be a Phoenix athlete.

Senior Bryanna Hames came off an outstanding last season. She represented the Phoenix for the first time ever in the program’s history in the NCAA Championship in Eugene, Oregon. She threw an outstanding 154' 9" (47.18m) on her first attempt in discus. She ended up dropping from 11th to 21st place at the conclusion of the event. Hames has been All-CAA in throwing since her freshman season.

She has been back in action this season as well. Earlier this month, Hames set a new personal record as she broke her own outdoor school record in the shot put. She had a heave of 51' 1.5" (15.58m) and finished as the runner-up in the event. Head coach Mark Elliston told The Pendulum in a previous profile story how much of an honor it was and still is to have such a talented player on the team.

“We knew she was one of the best throwers in the state, so we were excited to have her on campus and definitely wanted her to be a part of the program,” Elliston said.

Accomplishments and glory don't come easy for Hames. The discovery of protruding discs in her lower back stalled her from training, and she knew that this season it would be a struggle to throw to her fullest potential.

“I feel like my results are not where I want them to be right now” Hames said. “I still have weeks to prepare and fix it, and that is definitely the biggest hurdle that I have going on.”

In the recent Phoenix invitational, she placed fourth in the hammer event and second in shot put. Who’s her biggest competitor? Bre’anna Warren, who placed first in the shot put in the second straight meet. Warren threw a personal record 48' 6.75" (14.80m).

Both throwers are looking forward to the rest of their final seasons.

The Long Jumper in the Spotlight

Sophomore Melody Burke set a personal record for herself in the long jump in the Phoenix invitational. Burke hopped an 18' 9" (5.71m) for second place. She surpassed her current teammate, Emily Dixon, and placed 3rd on the all-time top five performance list.

“I did my first three and made finals. Then I did my second three and the last one I popped the big one. Nice way to end it. The measurement was 18 feet 9 inches, but if you want the meters it was 5.71.” Burke said.

Emily Dixon, the all around Athlete

For Senior Emily Dixon, competing is all-encompassing. She competed in three events last Saturday and planned on competing in four.

Since 2015, she has been recognized by the CAA five times, and just last year won the heptathlon title for the third straight season at the CAA Outdoor Championship. She also won the 100-meter hurdles at the Phoenix Invitational with a time of 14.94. On top of that, she cleared the bar in the high jump event with a season-best jump of 5’ 5” (1.65m) at the same championship event.

She qualified for finals for every one of the events she participated in.

Regarding the hurdles, she was not happy with her overall performance because of the weather.

“The time wasn't that great, but the conditions aren't that good because of the wind” Dixon said.

Despite the tough conditions, she persevered by obtaining 2nd place in the finals.

“I was pretty happy with that” Dixon said “It’s nice to see familiar faces at home cheering us on.”

What to expect for the rest of the season

The Phoenix will split up for the meets at the Virginia Challenge and the Duke Invitational next Friday, April 20. The meet will take place at UVA in Charlottesville, Virginia. Afterwards the Colonial Athletic Association (CAA) outside tournament will be held in Williamsburg, Virginia. If the team qualifies, the NCAA prelims and the NCAA finals at Eugene, Oregon.