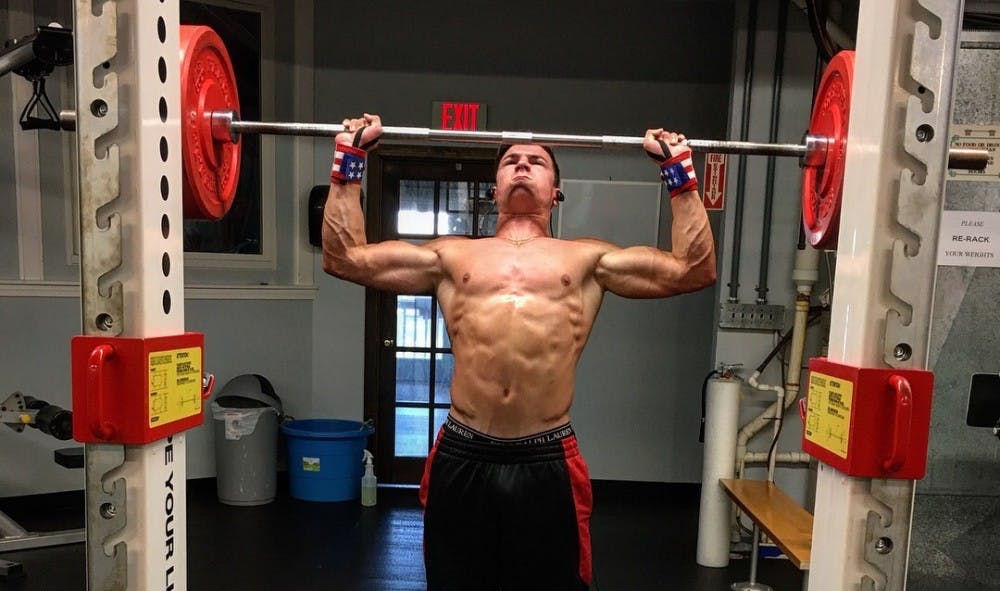 Elon University sophomore Michael Lombard is not your everyday student athlete. He doesn't just count his caloric intake, watch his nutrition, keep track of his protein and lift heavy weights to stay in shape or play a sport, he is preparing to compete and show off his razor-cut physique in a World Natural Bodybuilding Federation (WNBF) competition in May.

Lombard started going to the gym just lifting casually with his older brother. As he continued high school, he started to take weight lifting more seriously. His friend asked him if he wanted to compete in a bodybuilding show together, and he said he would. Since that moment, he has never looked back.

“Mike has drive like I have seen in no other person”said Michael’s friend, junior Charlie Walsh. “He constantly is trying to beat his own personal bests and attempts to get better each day.”

Lombard said bodybuilding has “great people” in general, and is “a great way to stay in shape.” He came in second place in the 2017 Natural Yankee Classic for Men’s Physique, hosted by WNBF last July.

“He was ecstatic when he got the trophy.” said Michael’s sister, freshman Stephanie Lombard. “It caused him to have more motivation moving forward.”

Extensive preparation and self-determination is essential in the months leading up to competition. He understands that he has to mentally be in it to win it if he wants to go home with the first place prize.

“There is definitely a lot that goes into preparation,” Lombard said. “I have to wake up every day with positivity. You got to get in your zone and have to work as hard as you can.”

Lombard also emphasized that his diet is just as important as gym time. The majority of his food comes from the Harris Teeter supermarket on Church Street in Burlington, where he buys roughly 60 dollars worth of personalized produce and groceries a week to maintain a lean diet. He stays away from Elon Dining most of the time simply because he does not know what the dining hall is going to serve on a particular day.

“I can get a salad from Lakeside and occasionally they have salmon, but I’d have to plan that ahead of time. Every day it’s different so it definitely is difficult,” Lombard said. “To hit my exact protein in grams, my carbohydrates, fats and my macros, Elon has a difficult approach to succeeding in those numbers. I prefer to just to just buy food on my own.”

Lombard knows the strain it takes on his body and he will not hesitate with being strict with himself.

“Seeing all the really good food and saying, ‘Oh I can’t have it’ is challenging,” Lombard said. He did admit that sometimes he does get tempted, but he knows winning a competition far outweighs eating dining hall pizza.

The temptation of greasy food is not the only difficult part of being a male physique competitor.

“You have to get down to body fat percentage like five or six percent, which is very difficult,” he said. “It’s crazy to see people that are really lean, but they still have a good amount of fat on their bodies. So you have to shred that and that is really hard.”

The day before competing, Lombard gets tested for any performance enhancing drug in his system. Right before walking on stage, he takes in some sugar to get his veins popping and his blood flowing.

When the competition arrives, it is all hands on deck. The men’s physique category, in which Lombard competes, is basically showing off your good looking muscularity and body condition. Judges don’t look for extreme muscle tone like you would see on world famous bodybuilder Arnold Schwarzenegger.

“It’s physique so you don’t flex really hard until you’re shaking,” Lombard said. “You have to have flow, you cannot strain yourself, you just have to look like the most beautiful and natural human being you can possibly be.”

Lombard said preparing for these competitions has taught him to share his determination with others. He helped his friend Charlie Walsh shed 25 pounds.

“He got me to come with him every day to the gym and pushed me to my absolute limit to try and make me better while also attempting to further that limit,” Walsh said. “He has the heart of a lion and wants to see everyone around him succeed.”

Stephanie always knew Michael had extreme determination. She knew he would be successful in all his endeavors as a physique competitor.

“Mike always had determination for things that he wanted,” Stephanie said. “He would never take no for an answer.”

The real question is: Is all of this worth it? Lombard is majoring in business administration and minoring in computer science at Elon, all while prepping for his competitions. He mastered balancing school work and working out. Lombard knows competing has helped him for the better, and he has no regrets.

“All in all, I would personally say that there a zero negatives in bodybuilding and that it is 110% worth it,” he said. “The aspect about bodybuilding that I love is that it helps with everything. Your body is developing, your mind is developing and it helps you with third party activities such as the motivation it takes to study that extra hour....it is hard to balance, but totally manageable.”

Lombard will compete in more WNBF competitions in May and June of this year in Worcester, Massachusetts.