Phoenix looks ahead to task at hand in CAA Tournament 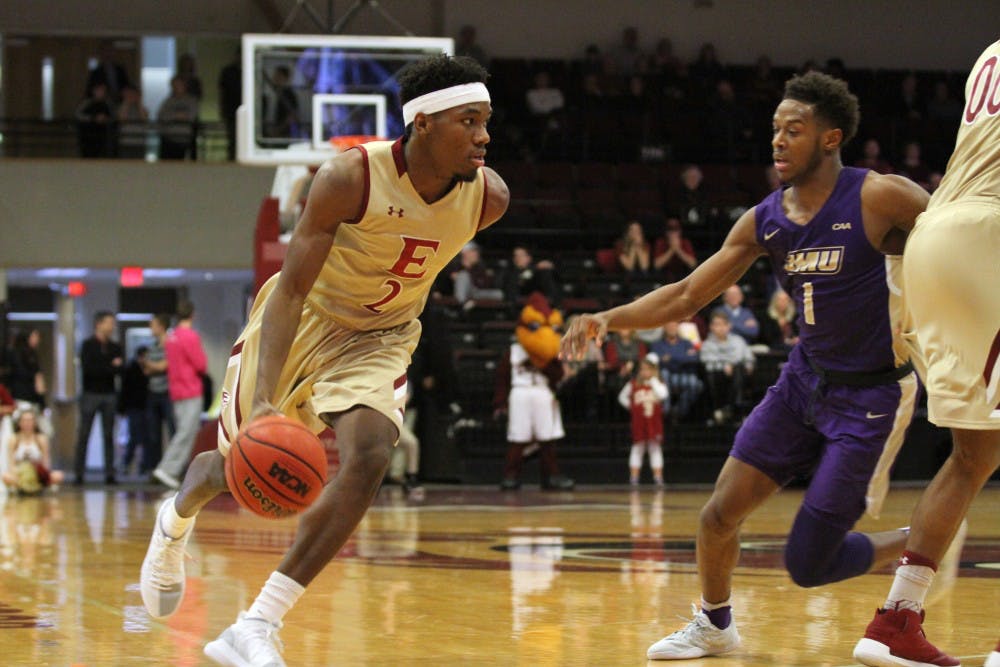 
Guard Dmitri Thompson '18 cuts to the basket against James Madison University on Feb. 26, 2018 in the final game at Alumni Gym.

The Elon University men’s basketball team was unable to send off Alumni Gym on a high note,  falling in the closing act of the storied facility to the Dukes of James Madison University 90-84.

Senior forward Brian Dawkins was hot early in the first half. He scored eight of Elon’s first 10 points. He finished the first 20 minutes with 13 points and an assist. But was unable to help out down the stretch, fouling out with 1:48 to go. Dawkins ended his final home game as a Phoenix with 25 points and an assist.

“It’s disappointing to lose the last game that’s ever going to be played [in Alumni Gym],” Dawkins said. “But the seasons not over … we just need to focus in, have a great week of preparation and be ready to play.”

“I’m grateful for the opportunity the school has given me to play college basketball and to carry on the tradition that so many people before me have had and to try and finish it out the right way in this gym,” Dawkins said, reflecting on his time with the program.

The Dukes used the three ball to score their first 23 points, including a four-point-play by junior guard Stuckey Mosley. Mosley would be the catalyst for the James Madison offense, scoring 18 points in the first half.

Elon battled back after finding themselves down 43-32 at halftime. Dawkins scored the first seven points for the Phoenix to open the second. Elon played with grit for the second 20 minutes, clawing back to take the lead at one point.

“They shot the ball very well in the first half,” Dawkins said of the JMU play. “We did a lot better in the second half of making them play hard and making them take more contested shots.”

Elon got the deficit down to just three points with 12 seconds left in regulation, but a good free throw shooting JMU team shut the door as Elon was forced to foul. The Dukes proved to be too much to handle, putting a damper on the regular season finale and the final night in Alumni Gym.

“We put ourselves in a position to win at the end and we just came up short,” said ninth-year head coach Matt Matheny.

“We’re taking the positives from all the negative situations we have been in,” senior guard Dmitri Thompson said.

Though Elon lost 10 of their final 12 regular season games, they said they are excited for the opportunity to play for a Colonial Athletic Association conference title down in North Charleston, South Carolina, this upcoming weekend.

“This is my last chance to play in the NCAA Tournament and it’s a dream of mine,” Dawkins said. “You have to give it your all no matter the situation … you have to leave it all out on the floor and that’s what I intend to do for this program and for these guys that have worked so hard to help me become a better player and to help me realize that dream.”

Elon will take on the University of Delaware in the first round of CAA tournament play on Saturday, March 3.