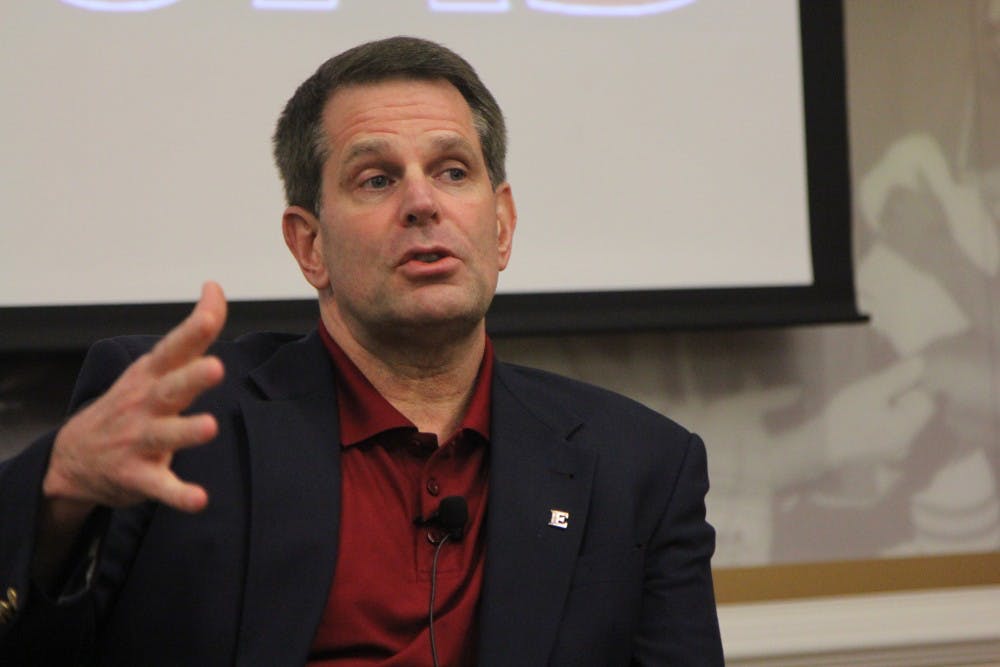 On the evening of National Signing Day, the Elon University football team held a signing day reception in the Walker Room of Alumni Field House. Head coach Curt Cignetti talked about the recruits that he and his team will be welcoming in the fall and took questions from the fans in attendance.

"I think these guys have the right stuff," Cignetti said about the new players. "I think they fit our situation here. You’ve got to have the athletic ability to be able to compete successfully, but also I think we’re looking for the character, the passion and the academic background."

The Elon football team is coming off of its best season since 2009. The Phoenix finished the regular season with an 8-3 record, moving up to No. 7 in national rankings along the way under first-year head coach. Elon captured a bid into the Football Championship Subdivision (FCS) playoffs where the maroon and gold fell in the first round to Furman University, 27-28.

Read about the revival of the Elon football program here.

Those seven players are joined by 10 other recruits who signed in December. They include:

"We’re excited about next year," Cignetti said. "There’s no self-imposed limitations. We start every year at ground zero … start over again and everybody’s got to come to work as good as they can be. I told the staff yesterday, it’s great to have everybody back and not lose anybody, but it’s only great if we all get better and improve. You got to get better every day and put yourself in the best position to succeed tomorrow."

Elon, with its 17 new players, will open the 2018 season at the University of South Florida on Sept. 1.

"It’s a great home schedule, it’s a tough schedule," Cignetti said. "We open up with South Florida down in Tampa. They had a great football team. We’ll be excited to play them. They lost a lot of seniors and it’ll be here before you know it."