Rushing to Religion: A girl’s journey to finding her independence through community 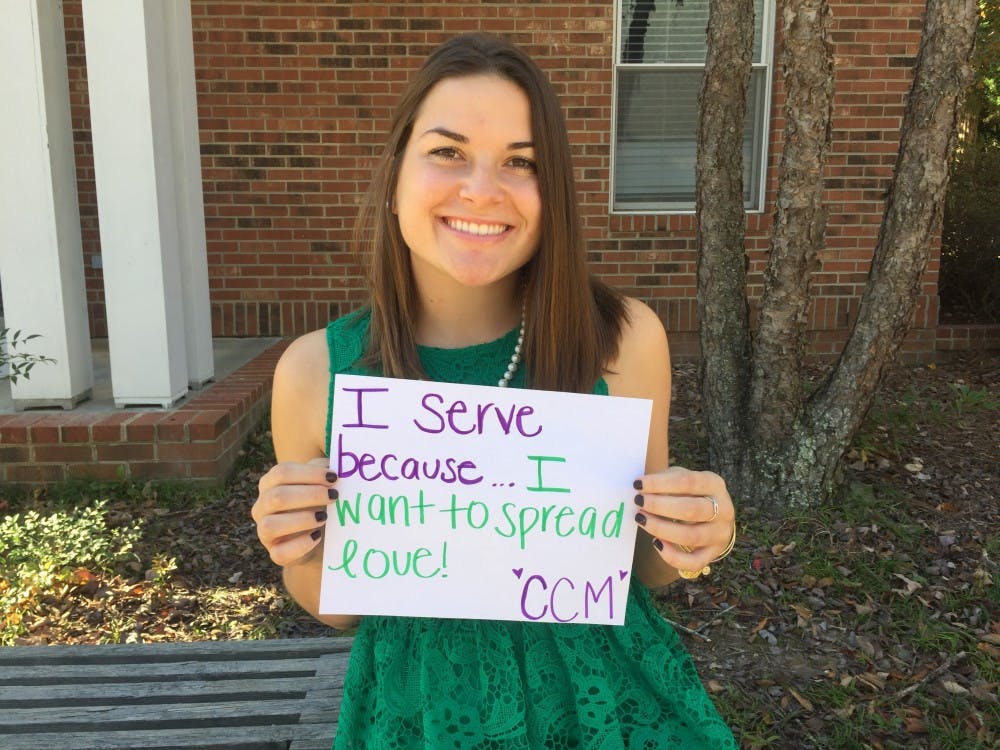 Leah Vail decided to join a sorority, but that was only the beginning of her journey. Photo submitted by Vail.

When junior Leah Vail decided to rush a sorority during Fake Break of 2016, she felt that there were two categories of girls at Elon that rush: the ones who had always dreamt of joining or the ones­ — like her — who were told to try it out to see how the experience was.

At Elon, 53 percent of females joined a Greek sorority in 2016 according to the Elon Fraternity and Sorority Life Spring 2016 Chapter report.

Once Bid Day came, Vail joined the Epsilon Chi chapter of Alpha Omicron Pi sorority. The happiness she felt as she ran down to the AOII house on Bid Day would soon turn into depression and loneliness, soon leading her to withdraw from the organization. It was through other organizations such Catholic Campus Ministry and Leadership Fellows that she found the communities that allowed her to prosper on Elon’s campus.

Vail’s freshman spring at Elon was busy with her sorority, Catholic Campus Ministry and the Leadership Fellows Program. At the time, she enjoyed being a part of these groups on campus.

“It was still very new and very innocent,” Vail said.

When housing registration came, Vail decided to sign up to live at the AOII house the following year. Vail says she considers herself a family and community-oriented person and thought living in the house would be a good idea.

“I just loved the idea of being a ‘house girl,’” Vail said. “They tell you all these things like, ‘You’re the face of Alpha Omicron Pi.’”

Vail’s first month and a half living in the on-campus house was nothing but positive. She began to meet freshmen who wanted to join CCM and AOII because they could visibly see the joy that both organizations brought to Vail’s life.

But that joy wouldn’t last.

In October 2016, Vail had her first meltdown. She called her mom in tears.

“I started realizing I didn’t like being at the house,” Vail said. “I would walk into the house and hear the conversation and literally turn around and leave because I couldn’t take it.”

Vail assumed that living under the same roof as her sorority sisters would lead to the development of special relationships. That was not the case.

This behavior didn’t sit well with Vail as she considers herself to be a freethinking individual.

“It was getting to a point of becoming groupthink, which is really unhealthy, and I don’t think any of them saw it,” Vail said.

Over the course of fall 2016, she says the sorority house transitioned from a home to a place Vail actively sought to escape. She said conversations were heavily centered on nightlife at Elon and going out, something that never appealed to Vail. She says that the values pitched to her during her recruitment process were not prevalent in the day-to-day operations of the sorority.

“Our biggest philanthropy event was a walk in December to raise money and awareness to combat arthritis, and half the executive leadership team wasn’t there,” Vail said. “Included in the people not there was the head of recruitment who told us all the time during recruitment training to talk about our philanthropy. This was a major indicator to me that things were messed up and not okay.”

It was the lack of ability to remedy these issues that Vail says haunted her. Initially, she took her concerns to older members of the sorority that she looked up to. She would ask them if they felt bad about certain aspects that she did not feel comfortable with, and they would simply reply that that is just how things worked.

Vail, who came in as a passionate freshman just a year earlier, became damaged by an overwhelming feeling of helplessness.

By this point, Vail’s friends had become fully aware that something was not right with her. Junior Andrew Novinski noticed the difference in Vail.

“Mid-fall was when I started seeing signs of disinterest, confusion and unhappiness,” Novinski said. “I never knew the full story of what was going on, but I just knew through non-verbal cues that she was struggling with something.”

As more time passed, things only got worse.

“I went home for Christmas break, and I was a wreck,” Vail said. “I came back to the house in January and could not deal with being at school, much less being in the house. The first week back at school I was definitely severely depressed. I wasn’t sleeping.”

By this time, Vail had removed herself from her other commitments, thinking that if she just devoted a little more time to her sorority things would get better. No longer was she a servant-leader in CCM, an organization that provided her with purpose and spiritual guidance. She also quit the club softball team and said goodbye to a sport she had played her whole life.

In January 2017, she called emergency counseling services to seek help regarding her situation. That same month Vail says she self-suspended herself from the organization. Every Greek organization has different definitions of what it means to be a suspended or self-suspended member.

“Once members are initiated, the withdrawal process goes through the national organization, so it looks different for every organization,” said Emily Mitch, assistant director of fraternity and sorority life (FSL).

While FSL doesn’t provide any formal resources, students struggling within their organization can meet with FSL staff. From there, staff members can refer students to counseling or other university services, but can’t make any appointments for students.

Former president of AOII, Shannon Rush, says these situations are saddening but serious.

“We take each situation where a member requests suspension, such as Leah’s, with care through an individualized and holistic process with a standardized protocol,” Rush said. “There are many more areas for students to explore and we highly encourage our members to inspire ambition in other ways.”

Vail knew she would not be able to emotionally handle living in the house during the upcoming recruitment period, so she was able to get a special housing request from the Office of Fraternity and Sorority Life to move out before sorority rush began at the end of January.

Once Vail moved out of the house was when the rumors started within her sorority. She heard girls saying that she was taking a mental health break.

“I would walk past people who were calling me their sister a week before, and now they wouldn’t say hello to me,” Vail said. “It’s like when someone dies and you don’t know whether to say sorry or not to acknowledge it at all.”

Knowing she could not battle her demons alone, she sought the advice of Rev. Peter Tremblay, associate chaplain for Catholic Life and Catholic campus minister at Elon. She had one-on-one sessions with him.

Tremblay recalls Vail seeking a clearer understanding of the people she should surround herself with. In their sessions, Vail and Tremblay dealt with difficult questions she had to reflect on.

“What are the communities that support my values? Where do I find them echoed?” Tremblay said.

After a few months of honest dialogue with Tremblay, Vail tried to immerse herself in CCM once again in March; this was a task that proved to be a real test for her. Tremblay thinks Vail was too worked up about a problem that never actually existed. Meanwhile, Vail questioned her fit within the Catholic Church and her faith.

Instead of critiquing her own beliefs, Tremblay admires her ability to serve as a model for others doubting their faith.

“Leah has done something most people of her generation cannot,” Tremblay said. “She is the poster child of the best ministry we can be about.”

As the months went by, Vail’s conversations with Tremblay assisted in the process of bringing Vail back to a sense of normalcy. He was proud of seeing how she tried to get a deeper understanding of her faith rather than being discouraged by her doubts. Vail leaned heavily on religion during this transformative phase of her life to provide her with confidence she could not gain elsewhere.

“Religion is honestly a way that I take care of myself because it’s restorative at its core,” Vail said. “It teaches you that you are completely okay as you are – imperfections and all.”

Back at Elon for her junior year with a fresh perspective and the confidence that she can overcome anything, Vail is nowhere near the same person she was for much of her sophomore year.

Novinski had not seen much of Vail for nearly six months before she rejoined the CCM community, and her outlook on life shocked him.

“It’s almost overwhelming at times in a positive way,” Novinski said. “There is no filter, which is really funny at times, but once you understand what she’s been through, it’s easy to understand why she’s so happy.”

In spite of everything she went through, Vail has no interest in destroying Greek life at Elon or even dissuading someone from joining a Greek organization.

“My goal now is not just to tell people it’s right for some or wrong for others,” Vail said. “We need to work on integrating Greek life more into our community because I think a lot of people just push it to the side.”

Vail was recently added to Leo Lambert’s Presidential Task Force on Social Climate and Out-of-Class Engagement. Her area of expertise on this task force: integrating the Greek community with the broader Elon community.

“My personal experience with Greek life was not ideal, but that doesn’t mean you can’t find meaning and community in an organization,” Vail said. “I’m just not a sorority girl, and I don’t know why I put myself in that box.”