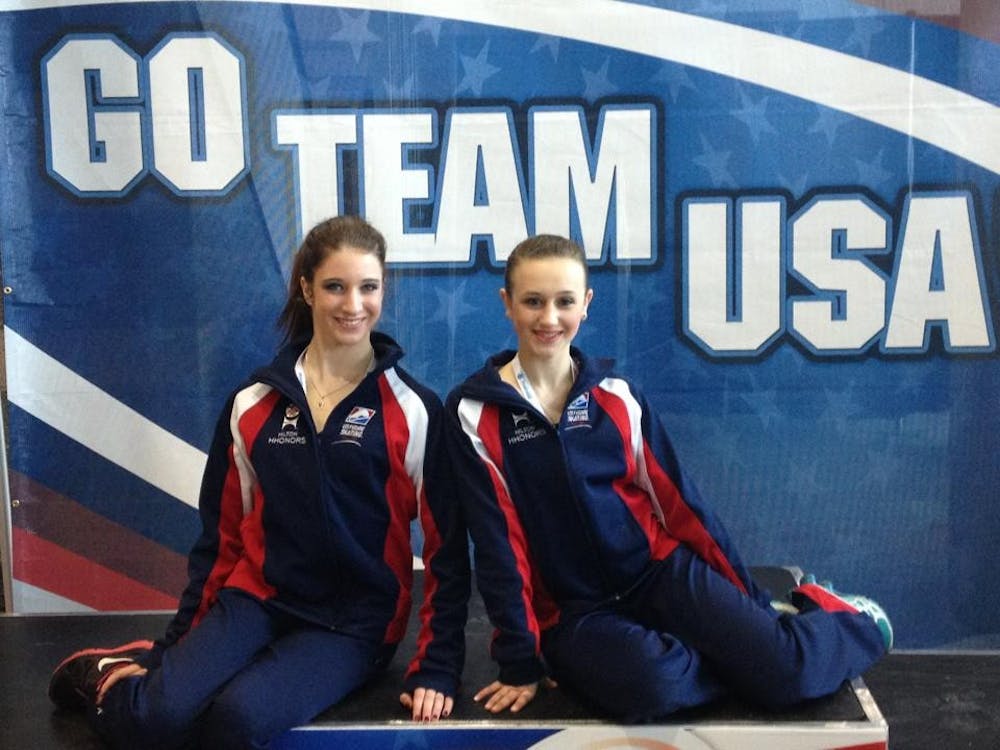 Miller and teammate in Austria where they competed for Team USA at the Junior Grand Prix when she was in seventh grade. Photo submitted by Whitney Miller.

As she trained for the Olympics, Elon University sophomore Whitney Miller sustained a concussion that changed the track of her athletic dreams forever.

The concussion that shattered her hopes of qualifying for the 2014 Winter Olympics came after she fell head first on the ice. She was dropped by her partner in a fluke accident during a run-through for their program, and she suffered a traumatic brain injury.

“It happened right before school started, and I can remember trying to set up my binders for school, and I was sitting on the floor crying because I couldn’t figure out how to put my binders together,” Miller said. “I couldn’t put the papers in the folders. That kind of moment is when I could tell.”

Traumatic brain injuries are commonly considered the most complex disease in the brain, according to Neuroscience News. This is because a severe blow to the head can cause a series of events to play out for months, years and possibly even decades. Ten million people a year are affected worldwide by traumatic brain injury, and it is the leading cause of death and disability in children and young adults.

Emily Wein, a competitive figure skater and friend of Miller’s from home, also had to quit the sport after suffering a severe concussion. But like Miller, she has no regrets about skating.

“Skating was a huge part of my life, and quitting was really hard, but I learned so much from it,” Wein said. “Skating helped me to mature early since I was consistently in a fairly professional setting.”

Miller was only 2 1/2 years old when she skated for the first time — her skates on the wrong feet. Her family still laughs about it to this day.

She continued to skate until midway through her sophomore year in high school when her most recent concussion proved too devastating to overcome. She competed in singles skating until she was 10 or 11, at which point she began doing ice dance, and her coaches thought she was a natural.

“I loved ice dancing because it meshed so well. I had done ballet, so ice dance came naturally,” Miller said.

Miller placed second in nationals twice and competed in Austria for Team USA in the Junior Grand Prix when she was in seventh grade.

Being able to represent and compete for the United States is an experience she will always be grateful for and will never forget.

“It’s an incredible experience to go abroad and represent your country and carry that reputation with you,” Miller said. “Every one of your actions has an influence on people’s opinion of the U.S., and it’s a really humbling and growing experience.”

Miller moved to Vancouver, Canada, to train at the Vancouver Skating Academy at the start of her sophomore year. Her training consisted of warmups starting at 5:45 a.m. and being on the ice from 6 - 11 a.m. Then she went to school until 4 p.m. and after that had dance practice, conditioning and more skating.

It was never a medal or podium that stood out to Miller as a defining moment during her skating career. Her daily training was grueling and taught her the importance of following through with commitment, something she is grateful to have instilled in her.

“It was about being gracious for the opportunities you had,” Miller said. “Making the most of what you have, because that was more standout than any medal or any podium.”

Her former coach, Doug Ivenick, trained with her the longest. Ivenick was the first to critique her, and it created an unspoken bond between the two. When he passed away, Miller used his death as motivation to keep training.

“He was the biggest influence in my career, and he instilled a confidence in me that I didn’t find in anyone else,” said Miller.

Miller never contemplated quitting skating, and she firmly believes that was her strength and the reason why she got so far.

“You needed to be 110 percent committed to it, or you wouldn’t make it through,” she said.

After the concussion that ended her career, Miller accepted the fact that she would not be able to return to skating, and moved from Vancouver back to Pennsylvania with her mom.

“It was nice to move home in a way and go back and live with my family all together,” Miller said. “Pretty much through all of my development as a kid, I hadn’t seen my dad or lived with him, so I missed a lot of time with him.”

In losing figure skating, Miller found that she gained back her family, making the adjustment easier.

Miller describes her transition moving back home as one of “a lot of firsts.” She started to run track for her high school as a way to stay active and then ended up doing cheerleading, too, something she is still involved in at Elon.

Kendall Milam, one of Miller’s close friends from home, believes that Miller has been better off since she stopped skating.

“I think Whitney was happier after she stopped skating because there was less pressure on her,” Milam said. “I know skating was a really stressful environment for her, and although she probably missed it, I think she’s in a better place not skating.”

Miller is a journalism and international studies major at Elon. She is currently a member of Elon’s chapter of the Delta Delta Delta sorority and is part of Elon’s cheerleading team where her discipline from years of skating training comes in handy.

Looking back on all that she has accomplished and experienced, Miller notes that her life has fallen into place.

“You can’t force anything. Everything happens for a reason. I was very bitter for a long time, but now I will have a career so much beyond just a rink,” Miller said. “I got the best of both worlds. I have lived two different lives in one.”