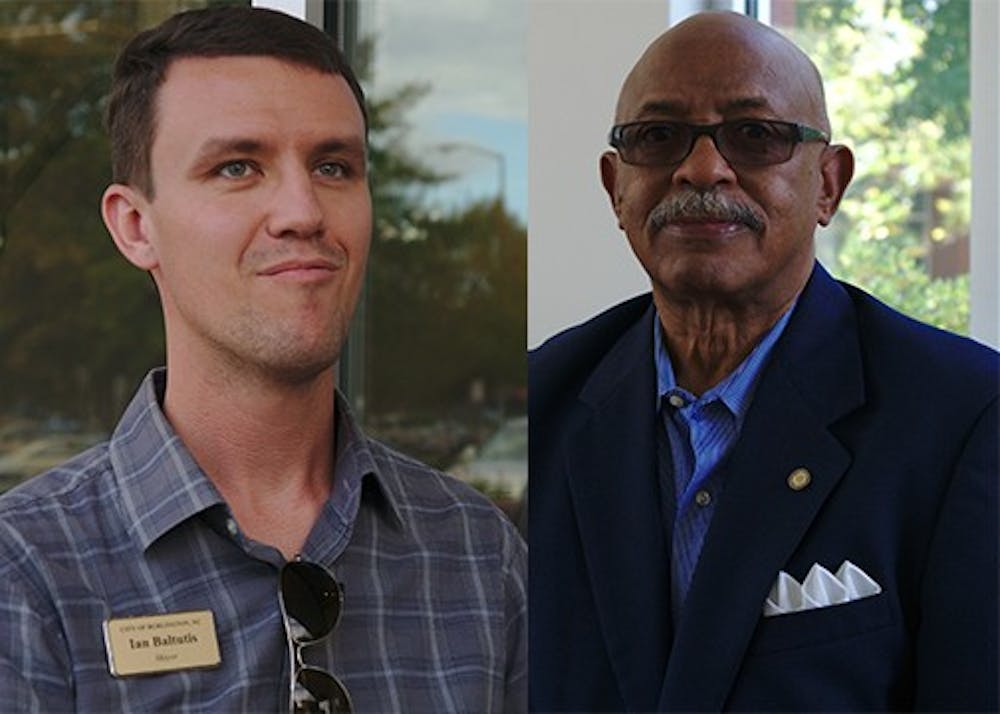 Residents of Burlington will cast their final votes for city mayor Nov. 7.

In the primary elections on Oct. 10, Baltutis and Faucette edged mayoral candidate Craig Deaton out of the race.

According to the North Carolina Board of Election Ethics Enforcement, Baltutis took 53 percent of the votes in the primaries, followed by Faucette with 36 percent and Deaton with 10 percent.

Despite Baltutis being in the lead, only 10 percent of registered voters cast a ballot in the primaries. Just 3,179 ballots were cast out of 31,352 registered voters. This is a number that may increase in the final election because of both Baltutis’ and Faucette’s focus on the issue of low voter turnout and community engagement.

“One person can’t change this entire city, but a lot of people working together on their own interests, on their own opportunities, can make a tremendous impact,” Baltutis said. “My goal has always been to reach out to more people and get them involved and empower them to make that difference.”

Faucette also agrees that the most important part of these elections is bringing the community together through voting.

From birth, Celo Faucette’s heart has always been in the city of Burlington.

Born in 1947, Faucette went through his elementary and high school years in segregation.

As a child, he remembers having to sit at the back of the bus, going to all black schools, sitting in all black waiting rooms and being a part of an all black Boy Scout troop. He constantly faced discrimination — a practice in Burlington that Faucette knew he had a duty to fix.

“I grew up in segregation … I know how discrimination works. I don’t want that to happen to anybody, anywhere else in the world,” Faucette said. “Especially here in Alamance County and especially here in Burlington. We can’t tolerate [segregation] at all.”

According to 2010 census data, 57 percent of Burlington residents are white and 28 percent are black.

While his race played a big role in his childhood in Burlington, Faucette hopes the color of his skin will not make a difference in the way voters view him.

“I hope people look at the candidate and not the race,” Faucette said. “If I should happen to win this election, I will be the first black mayor in Burlington.”

As a community, Faucette believes Burlington strives for diversity and is against discrimination, but he feels there is still work to be done.

“As a black man you feel [discrimination] a lot, but I feel like I can make it better,” Faucette said. “I can change people’s minds. The content of my character makes me who I am, and not just the color of my skin.”

Before Faucette became a politician, his father’s death kept him from completing his college education which led to Faucette becoming one of LabCorp’s first employees. Faucette continued to work for LabCorp, a health care diagnostics company headquartered in Burlington, for the next 36 years before retiring in 2005.

But retirement did not suit Faucette, who immediately got involved in politics.

“I wanted to get into politics because I knew how this town was when I left and when I was growing up, and I didn’t want it to be like that anymore,” Faucette said. “I grew up here, I know just about everything here in Burlington and that is a plus on my side. I know where people are and I know what we need.”

As a grandson, brother and father to ministers, religion plays an important role in Faucette’s beliefs and dreams for the Burlington community.

If elected mayor, Faucette hopes to continue building those community bonds by making the people of Burlington responsible for the city.

This is an aspect that if fixed, Faucette believes will change Burlington.

While Faucette agrees with Baltutis in that community involvement will improve Burlington, there are several aspects of the current mayor that he disagrees with.

“[Baltutis] is a smart young man … but he’s not from Burlington,” Faucette said. “I know my hometown, I know what it needs. That’s an advantage I have that he doesn’t have. I don’t think he knows as much about Burlington as I know about Burlington.”

Faucette also said he feels Baltutis’ inability to work with the city council has been hindering Burlington’s progress.

“[Baltutis’] greatest weakness is not willing to work with the council,” Faucette said. “He has a lot of things on his agenda, [but] you have to be willing to follow up on what you tell people, no matter who you are.”

While Faucette received 17 percent less of the vote during the primary election, Faucette reassures supporters that no matter the outcome, he is here to stay.

Coming out of high school in Minneapolis, Ian Baltutis ’08 had no aspirations to serve in city government, especially not in North Carolina.

Baltutis began his college career studying engineering in New York before realizing his passion for business, which led to his transfer to Elon University.

Even at Elon, Baltutis had no intent on joining the political sphere of Burlington. After graduating in 2008 with a degree in Business Entrepreneurship, Baltutis moved to Mebane where he worked for Honda.

In 2009, Baltutis bought a house in Burlington to work in the city. Baltutis’ work as a local business owner led him to downtown Burlington.

“I discovered downtown … and began to fall in love with the community,” Baltutis said. “It didn’t immediately pop out at me, but Burlington grows on you.”

This involvement through working with local businesses is what connected Baltutis to local politics. Before running, Baltutis considered the difficulty he may have as a candidate not born in Burlington.

“Having grown up in Minneapolis, a big city, it was tough to feel like you knew the whole community. Burlington is an amazing community because I feel like it’s the perfect size,” Baltutis said. “You have a wealth of resources, a wealth of opportunities. You have access to all the amenities that you would want from a big city without all the headache. I see it as a tremendous opportunity to make a difference.”

Unlike both of his mayoral opponents, Baltutis does not attribute his need to make a difference to religion.

“As a public leader, I see it as my role to rise above a single faith and work as that convener to bring people together,” Baltutis said. “It’s not about my faith as a Unitarian universalist ... what’s important is how we bring the whole community together to help us recognize challenges and overcome them.”

While originally planning on making that difference by running for city council, Baltutis realized that he could make “a bigger difference running for mayor and contesting that race.”

After winning the 2015 mayoral election by receiving 55 percent of the vote, Baltutis began his first term as mayor of Burlington.

Baltutis focused on engaging the Burlington community in more activities that he felt would strengthen the bonds within the city.

“My mission when I first started running for mayor was to always include more people in our community, and to always reach out to more people and make them more engaged,” Baltutis said. “We prosper based on citizen engagement-- it’s not about what I do as mayor or what any of our city council members do, it is about what we come together as a community and do.”

A mission that Baltutis hopes to continue.

“If I get re-elected, I would love to continue that outreach effort, continue to transition the energy of folks getting out to vote and getting engaged in the campaign into initiatives across the city,” Baltutis said.

Baltutis wants to not only tackle Burlington’s housing problem, but also tackle engaging the community.

“We need to make progress on ... tackling housing, specifically that our affordable housing is of a higher quality than it is right now,” Baltutis said.

Improving the quality of affordable housing is a factor Baltutis believes will promote community health and reduce issues with crimes, gangs and drug abuse. According to the Department of Public Safety’s most recent annual crime report, for every 100,000 people living in Alamance County almost 3,000 of them commit crimes.

The one person who may stop Baltutis from leading the charge in fixing these issues is his opponent Celo Faucette.

Baltutis has worked closely with Faucette, who served as his mayor pro-tem during his first term.

“[Faucette’s] heart is here in the community. He was born and raised here, and he represents a wide selection of the community,” Baltutis said. “That perspective is important to have on council.”

Baltutis had difficulty in agreeing or disagreeing with Faucette’s plans for Burlington.

“Mr. Faucette has chosen not to communicate any clear platform, or to create set of goals that he’s written and posted for the public to review,” Baltutis said.

Despite the uncertainty of this upcoming election, Baltutis promises to continue to work and improve the city of Burlington no matter what the results.

“If this election doesn’t go our way … we’ll continue to do what we’ve been doing, which is focusing on bringing the folks together to strengthen Burlington,” Baltutis said. “I got into politics as a way to enable all this progress and enable our community to become stronger, and if I’m not in politics after Nov. 7, I’ll continue to focus on the strength of our community.”